Peter Lawlor in his 99th year 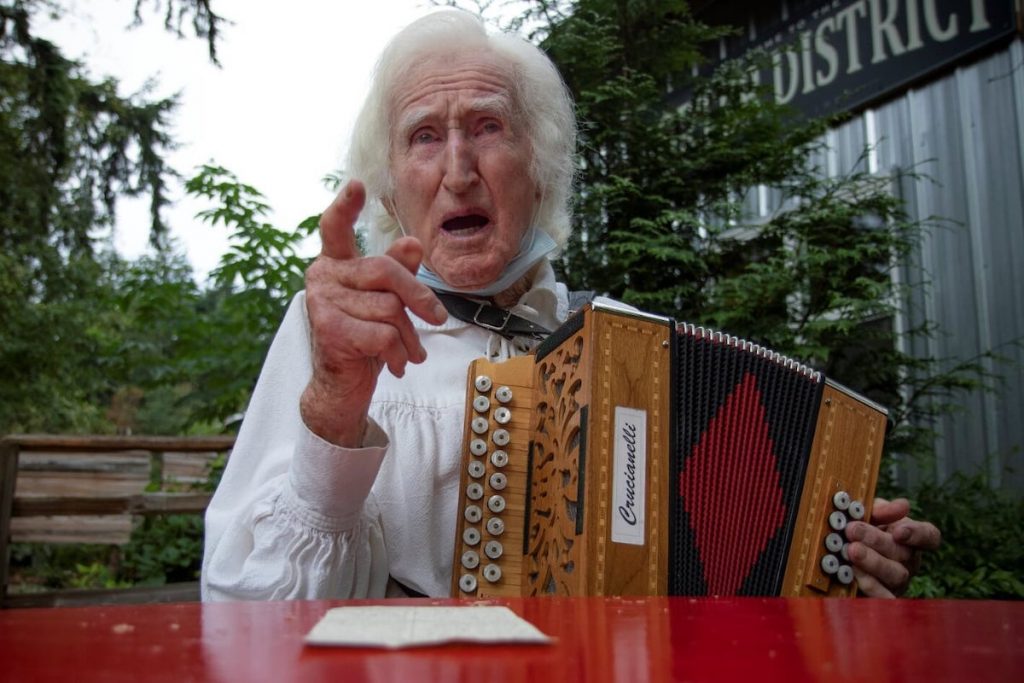 With a far-away and poignant look in his eyes, Peter Lawlor, who turns 99 November 26, reached into his memory for a song, Now is the Hour. Fingers pressing mother-of-pearl buttons on his melodeon, the feeling of longing in the melody and Peter’s expression tattooed the moment in my heart. I wondered, is this the last time that I will see Peter?

“It’s a song they sing on the dock when someone was sailing away from their families,” said Peter’s daughter Gretchen Lawlor, who sat with her New Zealand-born papa on an overcast Saturday morning at Mukilteo Coffee’s Cafe in the Woods.

“I have such memories of this song being sung from the dock as we tearfully stood waving to someone leaving New Zealand — I’ll show you some photos some day — of me and Deb (Gretchen’s sister) wearing little white gloves, waving and looking stricken. It was a big thing then, the world seemed so far away.”

Langley’s poet laureate —Peter Lawlor, who once worked as a New Zealand merchant mariner — has entertained the breakfast crowd the past sixteen years or so. Nowadays, Peter’s hearing is dimming, but his soul and fingers remember the tunes.

“Hello, Dad,” Gary said, joking that a wide angle lens would be needed to capture his girth as This is Whidbey’s David Welton took photos.

“He’s got the gig here forever,” Gary said of Peter’s long-standing Saturday morning concerts, which start at 10 and usually last an hour or so. Gary has recorded Peter’s music over the years. In one memorable video is Peter’s recent rendition of Auld Lang Syne, a poem written by Scottish poet Robert Burns about farewells.

Talking about farewells, we recalled with Gary, seeing a friend Derek Parrot’s last concert in Mukilteo Coffee’s back room back in March, 2011, while Derek’s many friends sang his tunes and gave him tribute. Derek then sang his last tune to a standing ovation and died days later on March 25.

A private farewell party to violinist Michael Nutt, a founder of the Saratoga Chamber Orchestra, was held at Mukilteo Coffee the night before Michael’s public tribute at the South Whidbey High School on March 26, 2008. At the first party Michael danced his last dance with his wife Diane Kendy, and on the second night, the audience stood and waved goodbye while Michael exited the stage and walked up the aisle, his violinist friend playing a solo of  Ashokan Farewell, which was then  joined by the orchestra. Michael passed away the following week. Gary recalled his days in his country western band with Michael, the Bucking A’s, when Michael dressed in rhinestone cowboy duds, playing country fiddle.

Back to Peter, we talked with Gary about hosting a farewell gig when Peter’s time to go came around. Gretchen suggested we host it while her dad still had his health. Why not?

But Peter’s got plans still. He expects to visit his girlfriend of 18 years, Roberta Brown, in Honolulu this January. He returned from a several-months visit with her last July. “Roberta’s a dahling—we’ve never had an argument,” Peter said, his blue eyes twinkling. The couple share a love of music of all kinds.

“Most my songs are sea shanties,” Peter said, describing the style he likes to perform. I always do the potboiler, Danny Boy, which everyone knows.”

David Welton said he ought to bring his dulcimer to join Peter for morning concerts.

Peter Lawlor and his late wife of 52 years Valentine, had three children, Ian, Deborah, and Gretchen.

“I met Valentine in New Zealand when I got off a ship,” said Peter recalling his days as a merchant mariner and falling in love with the beautiful Valentine. “I went to America by myself. I sent for her and we were married in old St. Mary’s in Chinatown in San Francisco. She was born Feb. 4, 1925. I was four years older than her. She died at the age of 75.”

After Valentine died, Peter came to Whidbey Island in 2000, where his daughter Gretchen had been living with her family since the 1980’s. Gretchen is close to her late sister Deborah’s children Caitlin Standish, and Jessie Pascual.

Meanwhile, Jessie’s husband, physical therapist Adrian Pascual, had been visiting his grandfather-in-law during the week, before flying back home to be with his wife and son in San Francisco.

Peter thanked Adrian for coming up to see him and helping out in the garden: “Your presence was very beneficial to me and and it is especially to Jessie,” Peter told Adrian, looking at him with great affection. “I remember building her a hobby horse when she was little.”

Jim Freeman, one of the island’s favorite funnymen, is a longtime friend of Peter’s. We invited him to join us last Saturday, but Jim said he was called previously to perform a wedding. By Sunday he weighed in with 81 words:

“Comfort breeds creativity,” Jim wrote in an email. “The comfort which Peter Lawlor knows as a creator of life experiences is translated with ease. Whether it is his stage performance, a shanty song sharing, his harmonica heroics, or punctuated poetry perfections, Peter’s comfort and genuineness shine thru like the childhood sparkle in his eyes. It is my joy and honor to be blessed by Peter’s company for these many years. What else would you expect from a couple of mates who met at a Whidbey General grieving class?”

Peter mentioned how he came to own his melodeon, recalling his friend Fred Lundahl’s flying him to Victoria, BC, where the accordion-like German-made squeezebox found him.

Chatting with Fred Sunday afternoon, Fred recalled the trip with Peter and his lady friend Roberta: “In a nutshell, I’ve known Peter since we opened the shop (in 2004). He’d come in and play his concertina. We became friends because we both played concertina. We like to take friends to Victoria. I wanted to show him a shop there where they sell instruments. We flew out and spent the night. Next day I took him to the accordion shop. He found one he fell in love with. His old button accordion is still in our shop, selling for next to nothing. Peter later flew to see Roberta in Hawaii and I babysat his accordion until he came home. The one he plays now is the second one. He told me that he wanted the more expensive one when we were in Victoria the first time. So I flew back and got the one he wanted and brought the first one back.”

The work on Peter’s melodeon is well-crafted and it performs well for her owner.

“I love this instrument,” he said. “But it’s a bit too big to be buried with me. Perhaps I will be buried with my harmonicas. I built my coffin for my final exit. One of my Soup Box Derby vehicles. It’s in my laundry room. Gretchen upholstered it so I’d be comfortable when I’m gone.”

Peter competed for years in the the annual end-of-summer Soup Box derbies, cancelled this year due to the coronavirus pandemic. This is Whidbey has published two stories about Peter’s races, Langley’s end of summer derby in 2019, and Peter Lawlor’s last ride…perhaps, in 2018. In those stories Peter said when the time comes, he’d like his ashes to be placed in the racing coffin in a final match with his long-time opponent Gary Piper, who races in a mobile outhouse.

Peter, and Roberta, when she’s in town, are regular visitors to the Clinton Library. Debby Colfer manages the library and makes it feels like home. She wrote in a recent email: “Peter Lawlor is one of our Clinton Library customers who has been around since the library opened in 2000. I have memories of him riding his bike to the library, with his dog, Brie, in tow. Peter would frequently break out in song or recite poetry, delighting us with his energy and his love of performing. He published a book of poetry that we added to our library collection. It was great to have his book on our shelves. A few years ago, Roberta Brown came to the library with Peter, and we were able to watch love bloom, renewing my faith that love was possible at any age. Peter has slowed down over the years, but he still manages to get to the library. Occasionally he will still serenade staff, and I find myself wondering if this will be the last time that I see him. I keep hoping that he will make it to 100. He holds a special place in my heart, and my life has been richer knowing Peter over these past twenty plus years. He still has a twinkle in his eye, and a smile that lights up the room.”

And Peter keeps on keeping on.

“He’s unquestionably and eternally optimistic, they called him the chime child, one who is born when the chimes of a church are ringing,” Gretchen said, recalling the origins of her dad, born in Wellington, New Zealand in 1921.  A chime child, she said, was supposedly blessed with extraordinary good luck. “We played music and sang at home. He played harmonica then. Deborah played the recorder and I played a little guitar.”

Peter and Gretchen began singing, “Gee, but I like you, I hope you like me.” Gretchen said it is a “funny little ditty we sang as kids. He’d haul us out to sing at beer fests. A pack of Aussies and Kiwis who’d have a wild party that lasted a day and a half.”

“I have an affinity with Beethoven,” Peter said, after he finished the morning concert and we sat around talking story. “We both lost our hearing. I lived longer (Beethoven died at the age of 56). He composed his ninth symphony when he was totally deaf.”

Peter looked around at the crowd and said, “I like to have intriguing people around. We don’t want anyone normal. What’s the point in being sensible? I’m 98 on the way to heaven’s gate. When I’m 99, I’ll be just fine.”