Langley Creates — the heartbeat of Langley 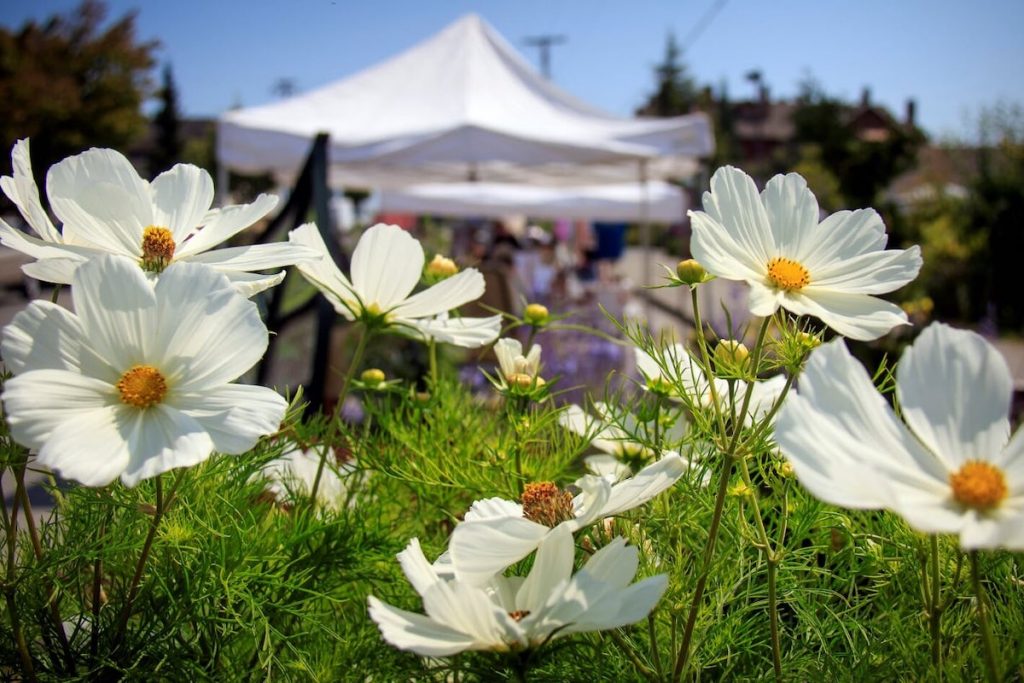 Since introducing the story Langley Creates in the June 12 edition of This is Whidbey, the district has helped to recreate the Langley Farmer’s Market and continues to collaborate and create a vibrant and connected community.

And, it is working.

Traffic flows past the vendors on Second Street and there is a safe community feeling that has been absent since the coronavirus pandemic mandated social distancing and the restricted use of essential gathering places such as the Langley Library.

Last Friday, I talked with the some of the can-do women who collaborated in the new outdoor street market held every Friday, 11-4, in downtown Langley. Langley Creates and the Langley Chamber are sponsoring it and it’s picking up traction. All socially distanced and masked, of course.

“I’m part of the Langley Creates steering committee,” said Peggy Juve, a design artist, who is known for her textile art. She hosts a Friday market tent selling custom COVID-19 masks and Island Shakespeare Festival-related merchandise. While this year’s season of Shakespeare plays was postponed until next year, the theater group still maintains a staff, raises funds, and is getting ready for next year’s summer season that attracts international visitors.

“From my perspective I’ve been involved with theater nonprofits for more than 20 years,” Peggy added. “I’ve volunteered, then served as board president of Whidbey Children’s Theatre and am the cofounder of the Island Shakespeare Festival. This is the first time I’ve seen the kind of collaboration and commitment to combining efforts for the arts. It is critical. I am also on the steering committee for the Whidbey Arts Marketing Alliance. As artists, both visual and theatrical, we have to pool our resources, and market ourselves to find funding. It is really exciting.”

Jesse Levesque works as the youth curator for Readiness to Learn, a non-profit under the umbrella of the South Whidbey Community Center. In the wake of the COVID-19 pandemic, Jesse was tapped by Inge Morascini, the chamber’s executive director, to help with coordinating the summer’s street market.

“A healthy, creative economy needs a marketplace,” she said. “We have a really good mix of vendors.”

“It’s an opportunity to bring people together in an atmosphere that is safe,” Inge added. “The market provides an outlet for makers, who have seen an uptick in their business. It’s about innovation. I think it will lead to a Renaissance.”

“Together we’re better,” Jesse added. “What an ally and champion the Creative District is. We’re attracting high-level funders. Our theme is ‘Find Yourself Here.'”

One of the cornerstones of Langley Creates is the concept of maker spaces, which promote prosperity and a vibrant community by blending existing resources with innovative thinkers.

Barts Better Foods hosts a tent at the Friday market. The company makes an organic meat alternative out of the Port of South Whidbey’s Commercial Kitchen space at the Whidbey Island Fairgrounds. I spoke with Anna Zefferys, a positive energetic woman who aims to make it easy to eat healthy and delicious food without the fuss while helping the planet, too.

“I think a lot about how we can contribute to the community,” she said. “I want to build Bart’s Better into a business that supports local farms, provides career opportunities and gives back to the community where needed,” Anna said. “It is exciting to be a product innovator in a fast-growing food segment and to see how that can translate into positive impact here on the Island.”

Bart’s Better Prime Veggie Meat invites folks to give their gut a vacation from meat now and then, with this delicious plant-based protein. I cooked it up in a spaghetti sauce and my meat-preferring husband said his hunger was satiated. The minimally-processed, organic blend has a base of organic sprouted lentils, organic beets, organic hemp seeds, and organic reishi mushroom powder.

Joann Quintana, singer-songwriter, chair of the Langley Arts Commission, and member of the Langley Creates steering committee, wanted to raise money to improve Seawall Park and support the arts. Inspired by Rachel the Piggy Bank, Pike Place’s famous bronze piggy, which has raised more than $200,000 since 1986 for social services, Joann, thought of having a similar fund-raiser for Langley. She asked her husband for ideas and he suggested a whale. Thanks to her colleagues at the newly-formed Langley Arts Fund (LAF), the idea took shape and LAF raised thousands of dollars in private donations. The gray whale-shaped Georgia Gerber bronze sculpture now adorns the space above Seawall Park. Visitors can make a donation by slipping coins or bills through slots in the whale’s blowholes.

“A wishing whale creates a sense of identity (gray whales visit Langley each spring) and knits the community together,” Joann said. “We didn’t know if we could afford a Georgia Gerber, but she and Randy (Hudson, Georgia’s husband) were just great. They are very community spirited.”

Bronze sculptor Georgia Gerber’s work is found in public places throughout Whidbey Island and beyond, including the public access point, Clinton Beach, a story covered in a recent This is Whidbey. In that story, Georgia said, ” I always enjoy it when the sculptures are interacted with by the public and hope this achieves that with the families using the park.”

In the mean time, stay tuned as Langley Creates continues to attract attention from near and far. Its next project is painting the bus barn building near Whidbey Island Center for the Arts.

Meanwhile, if you are a local vendor and would like to be a part of the locally grown and locally made Friday Market, visit this site.