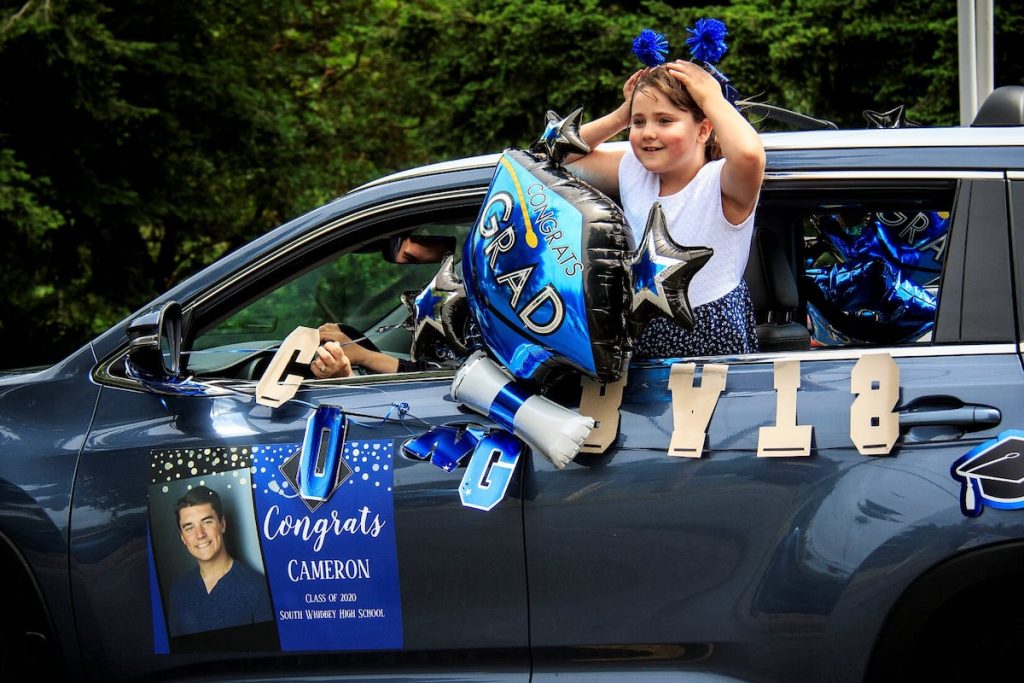 Graduate Cameron drives while a girl looks in awe amid the heartfelt community celebration of this year's graduating class.

This June’s highlight was seeing the faces of the class of 2020 as they were celebrated in the streets of Langley. Tears filled my eyes and I felt their joy and the love our community gave them.

“Like many things these days, the idea was out of the ordinary but the community came together and made it extraordinary,” said Patricia Friedman, whose daughter Flannery Friedman graduated from the South Whidbey High School this year and plans to attend WWU this fall to pursue a degree in science. “A week ago (the week of June 7), students were hemming and hawing  about participating; they had already missed their whole spring quarter, why should they bother, what was the point, who cares. All completely understandable from a group that has had not just their lives but their futures turned upside down. But, the class of 2020 stepped up, dressed up and showed up to do this thing called graduation and the community did as well with an outpouring of love and joy that was beyond measure. From rainbow posters to balloon-lined streets, Whidbey let these kids know how special they are, how hopeful we are and that no matter what the world brings their way, that Whidbey is here for them.”

Principal John Patton and high school staff planned the event. The Langley Chamber of Commerce decorated the village in blue and silver, high school colors. Photos of the students showed up on local business windows.

“I have not seen so many happy people in a while,” said David Welton, This is Whidbey’s photographer, who learned about the graduate parade from a Facebook posting and ran out the door to take the photos which convey the day’s feeling of hope and celebration. “Greatest graduation event ever! I was nearly in tears the whole time. The community support was amazing.”

Look for photos of the graduates on David’s Facebook page.

With 104 graduates, students paraded through town and drove to the high school to do an elbow bump with Principal Patton and pick up their diploma. They received goody bags of graduation bling. Cars and truck were painted and decorated to reflect the spirit of the Go Blue Booster Club and celebrate Whidbey schools.

Tobey Nelson, decorated the arbor which students walked through to receive their diploma.

“The school has hired me over the last several years to provide flowers for many special events, including graduations, homecoming, etc.,” Tobey wrote in a Facebook personal message. “I typically donate some of my time for these occasions since I have kids in the schools. The graduation arbor this year featured all Whidbey-grown flowers! Some were from my own garden and some were grown by Sonshine Farms, right up the road from the school. Additional plants were donated by Venture Out Nursery for the day.”

Sawyer Mauk was one of seven students who achieved a GPA of 3.933 or higher and earned the honor of valedictorian. I’ve known Sawyer since he was in kindergarten and remember how well thought of he was by other students at his elementary school.

Here is what he wrote in a text about the last quarter of his senior year and what he plans to do next: “Coronavirus has primarily affected my understanding of just how privileged I am to be in good health and in a socioeconomic environment where I will be okay in a recession. My best memories from high school are living abroad in Bolivia and Mrs. Gochanour’s Spanish class. I’d like to go into small business development overseas. I plan on attending Lewis and Clark and College in Portland.”

Michael Harwell, a cross-country athlete, raced from an overheated truck that broke down in the parade. His mom, Kathy Harwell, said, “The vehicle we were in overheated and stopped working. Michael flagged down a passing car and hitched a ride to the school so we could get a second vehicle. I think the ceremony they did was great. There was disappointment—Michael didn’t get to do the track season. No senior prom. No senior band concerts. We did the best we could. He got a scholarship at St. Martin’s in Lacey for cross country. We had a small family gathering afterward.”

Patricia Friedman added that her family has been a part of South Whidbey schools the past 15 years and spoke with heartfelt appreciation about our community: “We came from a big city and from the day we arrived to this moment, Saturday, it wasn’t just our kids’ journey, but ours. This community has always embraced everyone, If you want to create something for the good of others, people will gather around, support you, participate. At Whidbey TV (where Patricia works as a media producer), it’s about creating these wonderful gifts to others. To see it come to my daughter on her graduation day was overwhelming. To show up and be overwhelmed with love, support, and happiness to all these kids, many of which they didn’t know-it was absolutely beautiful. I’m incredibly grateful. With the challenges and ups and downs and unprecedented times, I’m thrilled that when met with this one, our graduates felt the love and support that our community is known for.

“On Maxwelton Road, little children with their parents came to the end of the driveway. They had made a poster with a rainbow. At every turn there was something special. Balloons put up by the Chamber. All these little things added up. No matter what world throws to them, Whidbey is here for them. Powerful and wonderful and fills my heart.”

Here are the graduates, the award-winners, and the providers of scholarships.