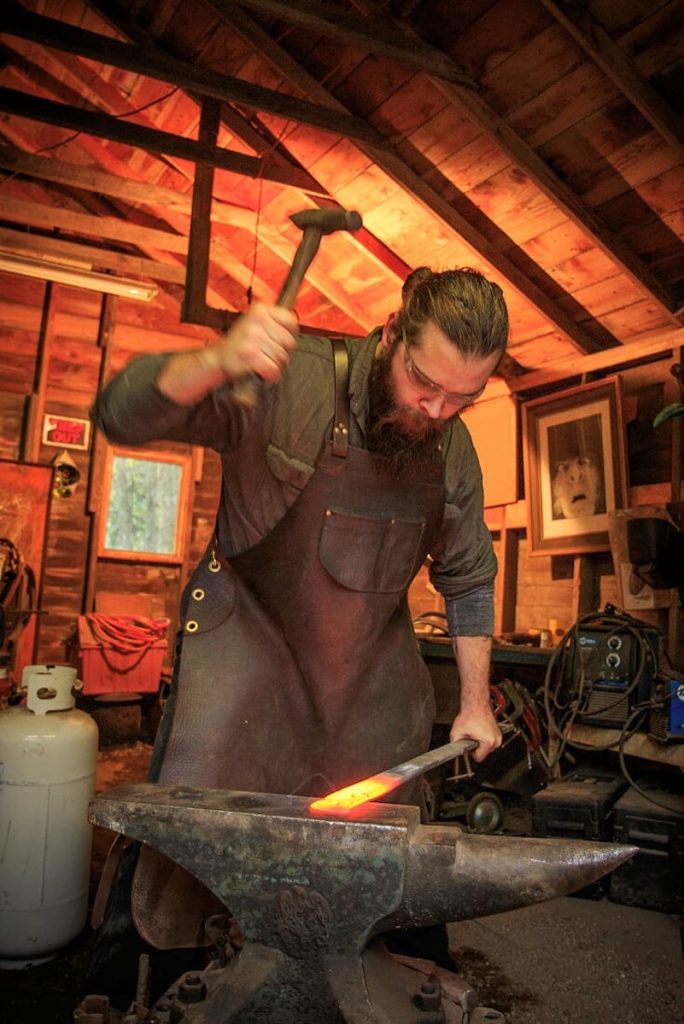 Brendan McHugh of Banshee Forge, is a blacksmith and metal fabricator in Langley.

Imagine harnessing the power of creativity and using it to fuel economic vibrancy during these uncertain times.

“There’s a light at the end of the tunnel,” says Mary Ann Mansfield, chair of Langley Creates, now part of an innovative state certification program that Langley, the fourth city to receive one in the state, was awarded in March.

The South Whidbey Community Center hosts a variety of community support non-profits, together with maker spaces, where people can explore their creativity.

“We see the South Whidbey Community Center as the heart of the Creative District,” says Joann Quintana, chair of the Langley Arts Commission and member of the Langley Creates steering committee.

“What is going on there is earth shaking. For example, the maker spaces at the community center are a wonderful example of how creativity and a space to gather can deepen and enrich a community and lead to people becoming entrepreneurs and creating bonds.

The idea of maker spaces was championed by Jeff Sturges, who, in a 2014 TEDx talk, describes the synergy that emerges when people come together and are given a chance to learn new skills. His program brought a sense of renewal and confidence to an area of Detroit.

“What a pleasure this process has been over the past year. So collaborative. Ten of us met once a week for almost a year to bring this to fruition.  We–representing WICA, the Langley Arts Commission, the Chamber of Commerce, the Port of South Whidbey, South Whidbey School District, Readiness to Learn, Island Shakespeare Festival, Island Dance, and Whidbey Island Dance Theatre. Everyone left their egos outside the door. Working together and laughing. We just had such a good time. Nothing like energy and enthusiasm to move things along. I think this is bloody impressive.

“I would like to tip the hat to Rene Neff, who was very instrumental in getting the creative district ball rolling,” Mary Ann adds. Rene Neff served on the Langley City Council for years, was a beloved elementary school teacher, and co-owned Brackenwood Gallery with Ann Waterman.

“Langley Creates is about taking what we have and bumping it up to new levels, perhaps bringing people together that may not have cooperated before,” adds Joann.

The first improvement project will be painting the bus barn at the intersection of Sixth Street and Cascade Avenue.  While the Django Fest mural will stay, Langley Creates is looking at raising funds to cover the cost of painting and supplies for the remainder of the building.

“This is a baby step effort to bring people together,” Joann says. “What we’re doing is coordinating colors of the bus barn with the existing WICA building.”

Looking to the future, the creative district is setting its sights on winning a National Endowment for the Arts grant. “This is the Holy Grail,” adds Joann, who has a background in place-making and community development.

NEA has pioneered the idea of place-making to connect communities, people, places and economic opportunity via physical spaces. They support communities throughout the country through Our Town grants.

“Every community has a unique history, a unique coming together of people,” Joann says. “We are celebrating that and using it as a base.”

Other potential future projects being discussed are helping the Port of South Whidbey with refurbishing of the fairgrounds and supporting the Port’s mission. Another is catching up with maintenance on the former middle school property.

Mary Ann adds “We want this to be a home-grown effort.”