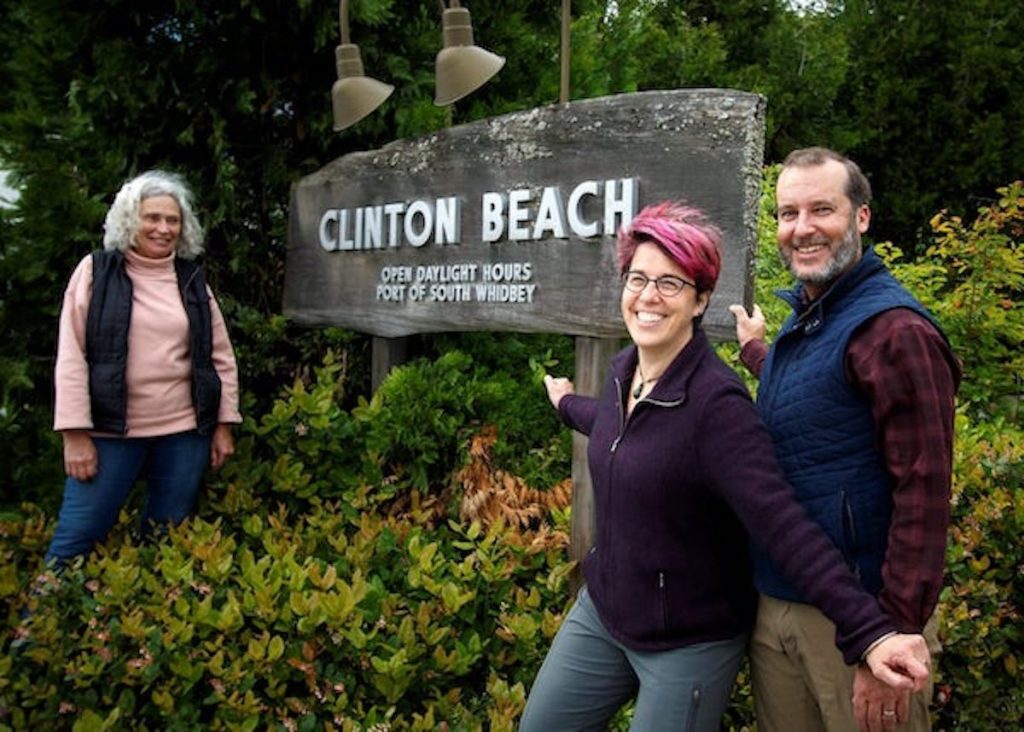 It is worth your while to visit Clinton Beach next to the ferry terminal. It’s a little public haven, a tribute to years of heartfelt work by people determined to restore beach access for the community. It celebrates its 14th birthday this weekend.

The half-acre beach front site, managed by the Port of South Whidbey, was once home to a restaurant known as the ‘Admiral’s Mistress’ and now features award-winning designed structures and sculpture from local artists.

The fact that Clinton Beach exists at all is due in large part to Lynae Slinden, a natural leader, who rallied the community to form a collective vision of what could be theirs. Energized from the victory of helping to save Saratoga Woods from commercial development during the late 1990s, which culminated in the wood’s dedication as a park to Island County in 2001, Lynae took up the cause of restoring beach rights for the public in Clinton. As a commissioner for the Port of South Whidbey at the time, Lynae, through her influence and hard work, created a lasting legacy for years to come.

Clinton residents lost their saltwater beach access in 2000 when the ferry terminal expanded and eliminated long-established beach rights on the south side of the ferry dock. In response Lynae founded the Clinton Community Forum and launched a campaign, “Where’s our beach?” Typically public beach access areas are provided adjacent to the state’s ferry docks.

The campaign attracted volunteers who collected more than 750 signatures in a month’s time to petition Island County and the Port to purchase land just north of the ferry where the decrepit remains of Admiral’s Mistress restaurant stood in an abandoned asphalt parking lot. The property owner was asking $1.4 million to sell the land.

The Clinton Community Forum hired Phil Pearl of Open Space Resources to work his magic. Phil was an ace negotiator, skilled in purchasing land for public use. One of his gifts was in enlightening land owners of the wisdom of selling their property—with Saratoga Woods and Double Bluff Beach, as examples—at a reduced price and expertly handling the real estate details. In the case of Clinton Beach, Phil worked with its property owners to drop the price to $650,000. A state grant in 2005 from the Washington Wildlife Coalition awarded $576,177 to be used with matching funds to purchase the property with 180 feet of sandy, no bank waterfront. After remarkable effort from Lynae and the community over the years, Clinton Beach was dedicated to the public on Memorial weekend, 2006.

Lynae said she wanted to “add a note of thanks to Ed Field, the port manager at the time. An engineer, he was hired by the port fresh off managing the construction of the Paine Field Flight Museum to lead several major projects the port was then working on. We were finishing the boat launch and parking area at Bush Point, upgrading Mackie Park, negotiating taking over the marina from the City of Langley, improvements at Possession Beach Park, and rebuilding the restrooms at Freeland Beach among many other projects with organizations like the Economic Development Council and Marine Resources Committee. We couldn’t have found a more knowledgeable and grounded leader. He and Matthew (who you will read about soon) were instrumental in getting the grant after two attempts.”

In a June 10, 2006 letter to the South Whidbey Record editor, Diane Kendy and her late husband Michael Nutt thank Lynae for her work in creating the new Clinton Beach. Diane and Michael were leaders in saving Saratoga Woods.

“The new park in Clinton is a little gem. It now provides an appealing ferry entrance to Whidbey Island, instead of the eyesore which used to greet visitors, and it is a fitting reflection of the talent and dedication abounding in our generous community of artists and craftsmen. However, it is South Whidbey Port Commissioner Lynae Slinden who, most of all, deserves our special thanks for making this dream a reality. Without her steadfast vision, passion, and persistence, this project would never have got off the ground, let alone come to fruition. South Whidbey owes Lynae a huge debt of gratitude!”

Having achieved victory at securing public land, the next step was to demolish the old restaurant and replace it with classic design elements reflecting the creative talent of Matthew Swett of Taproot Architects. Just starting his business, Matthew teamed up with The Berger Partnership (a ‘talented landscape architecture firm from Seattle,” Matthew says). Both firms were honored in December, 2006, for this work with a pair of awards from the Northwestern Washington Chapter of the AIA. The AIA recognized Matthew’s  “seamless integration between architecture and landscape,” and his “outstanding examples of architecture worthy of study by the entire profession.” AIA Juror Richard Cardwell said, “Every once in a while a project like this comes along in an architect’s career and you say to yourself, ‘Don’t screw it up.’  In this case they didn’t.”

Taproot was hired to design a picnic shelter, restroom, and trellis; a wheel-chair accessible ramp and a viewing deck made of recycled material. At the time, Matthew—who says, “I was just a green kid then—was teaching carpentry at Seattle Central Community College (now known as Seattle Central College). Taproot recruited Frank Mestemacher, lead carpentry instructor for Seattle Central Community College, and his 20 students to do the cutting and trimming of old-growth timber provided by wood master Kim Hoelting. Kim owns Live Edge Woodworks in Clinton.

“This project was a blast,” Kim wrote in an email.  “We provided all the framing timber, sourced from a small mill near Forks, that specializes in salvaged old growth timber. The tables were made from Sitka Spruce that we salvaged on Prince of Wales Island in SE Alaska. The park sign is Western red cedar, also from SE Alaska.  And I agree with that this little park is sweet, and very overlooked for some reason.

“We love our little niche business, tucked quietly into the Maxwelton Valley.  Our three specialty sawmills and studio shops have helped us cook up and execute a wonderful variety of wood/art for more than four decades; work that we are very proud of.  And best of all is the scattered network of loggers and sawyers up and down the coast that supply us and cheer us on.”

When the funding was finally in place, Lynae earmarked part of the funding to pay for art: “I said this is an art community. I’m taking 5% for art.”

A bronze edition of a Douglas squirrel cast by Lynn Swanson stands on the back wall of the picnic shelter. Sharon Spencer’s ‘To Life’ bronze figures grace the picnic area. Georgia Gerber’s bronze mama and baby otter are placed in the children’s sand play area. Judging by the patina on the otter’s heads, many hands have rubbed their surface.

“I have always enjoyed the forms and essence of the otter,” Georgia wrote in an email. “In this piece I wanted to capture the relationship between a mother and her young. The pairing of the forms not only illustrates the emotional bond between them but also an opportunity to create a repeated pattern with the older adult otter and her pup. I always enjoy it when the sculptures are interacted with by the public and hope this achieves that with the families using the park.”

At a visit this week to Clinton Beach—Matthew and his wife Sarah Birger climbed up on the live roof covering the picnic shelter. They removed bottles and trash thrown by unthinking visitors. They pulled out blackberry vines, whose thorns could pierce the live roof membrane. Matthew and Sarah planted the living roof themselves when the waterfront access was first created.

“To see the state of the landscaping now breaks my heart,” Sarah said, recalling how beautiful the park landscaping was 14 years ago.  “I’m hoping the South Whidbey Garden Club might adopt this.”

“This is a call to arms to get a ‘Friends of Clinton Beach’ started,” Matthew added. “We have amazing resources in our community. We must care for this place.”

Matthew pointed out the decorative recycled glass tiles, that he bought from Bedrock Industries in Seattle, and installed in concrete pillars. Another detail that adds to the park’s intentional design.

Clinton Beach is also a Universal Access Park and during the summer, special mats are installed to permit wheelchair access to the beach.

Meanwhile, a kingfisher called. A family parked in the small lot. Lynae waved in welcome.

Take a picnic here and feel the good grace left by the great people who created this lasting legacy.