Coming together rather than pulling apart 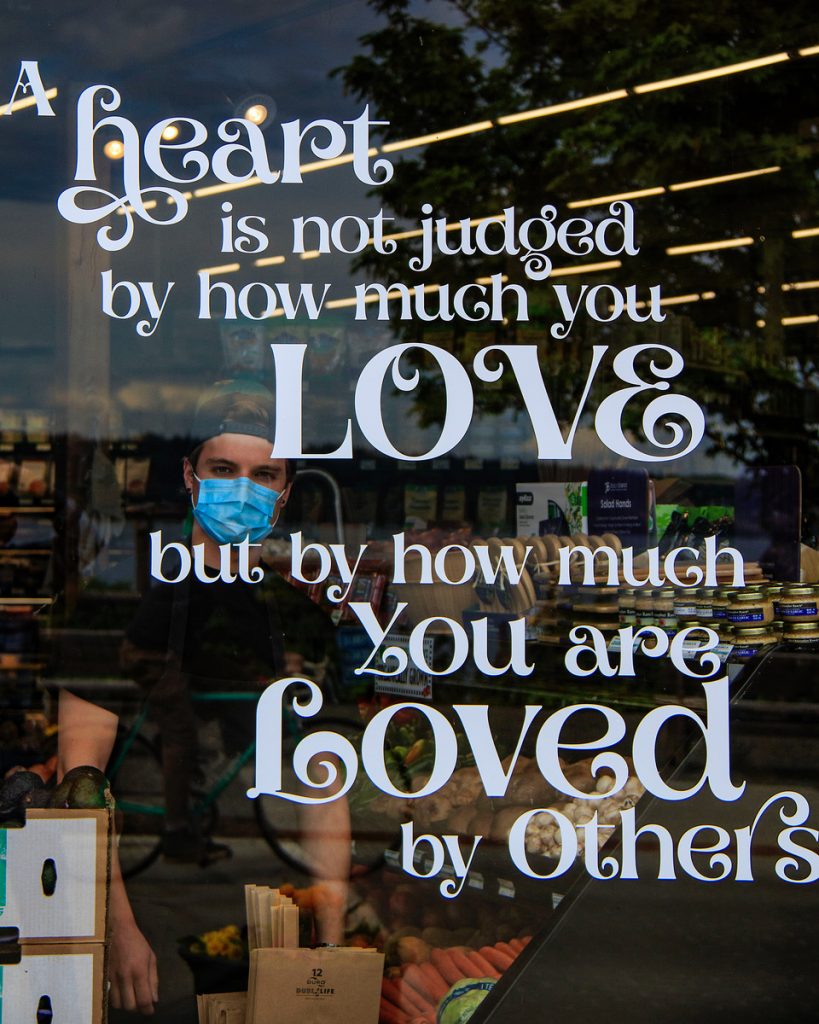 There’s remarkable kindness on our island these days. From Langley Main Street Association’s upbeat messages on village storefront windows to the heartfelt greetings we exchange while masked at the Star Store, Langley Post Office, and while walking around town, there’s a shared sense that we can make it through these times together.

Michaleen McGarry, executive director of the Langley Main Street Association, heard that a mainland city had posted positive messages on its downtown windows and was inspired to lift our spirits in Langley fashion.

“The seed of inspiration was actually in downtown Snohomish that did something similar and Krista Loercher of Whidbey Island Kayaking brought it to my attention in early April,” Michaleen said. “I reached out to the Snohomish Chamber of Commerce only to find that a local business there had organized it all. I loved the idea and brought it to my promo committee for approval to run with. I thoroughly enjoyed finding quotes that were inspiring and comforting, and in many cases worked for the corresponding business. We stayed local, using Joe Menth of Fine Balance Imaging for production. I sent over the messages, a general design concept, and Joe brought it all together and installed them.”

Along 2nd Street, Langley Library’s quote is printed on three of its windows: “Don’t Give Up. I Believe in You All. A Person’s a Person No Matter How Small— Dr. Seuss.” At Windermere Real Estate: “It takes a village (by the sea).” It’s worth a walk around to read and take in the meaning of the artfully-styled words, along with the village flowers, bunnies and vistas.

Our village by the sea also stepped up to help a local woman who volunteers to make home-cooked meals for those who need them.

Langley resident Ursula Shoudy was feeling restless and wanted to cook up some comfort food during the early days of sheltering in place. She made more than she could eat and called a couple of friends to share the meals with, Judy Thorslund and Kathy Trudeau. Judy lives at Brookhaven, a little community across the street from Ursula’s house. The initial meal blossomed into making meals for Brookhaven residents and people in homeless shelters.

Ursula chatted Tuesday morning about serving on the Langley City Council until December 2019 and how that led to the evolution of making 60 home cooked meals once a week.

“Funny how it all started,” Ursula said, while we visited on her front porch. “I was on the (Langley) City Council for four years. We started an emergency preparedness program which broke the city into 12 zones, which we divided up. For me that is Brookhaven and our local businesses. We planned for earthquakes and natural disasters. By the end of February, the city printed COVID-19 guidelines. I helped pass them door-to-door at Brookhaven. It was eye-opening meeting some of the people who couldn’t get out. Some in walkers and wheelchairs. Everyone had stories to tell.

“I started feeling the anxiety of sheltering in place. My husband is a good cook, a vegan. I like ooey-gooey kinds of food sometimes. I started sharing these dinners with Judy and Kathy. I posted photos of the meals. Robin Black noticed what I was doing and offered to make a donation. It was a good amount. I started with making 24 meals for people in Brookhaven. I met veterans, a middle school teacher I once had and love.”

Robin Black is married to Langley Mayor Tim Callison and is one of the city’s community weavers.

“Ursula and I have been long-time friends,” Robin wrote in an email. “Our children grew up together on the south end of Whidbey. We have had many conversations about how COVID-19 is impacting our small community and the world.

“Ursula is an extraordinarily generous person with her time, energy and love, and is always wanting to help anyone in need. When she told me she was making meals for her neighbors, I wanted to support her any way I could. I don’t have a lot of extra time, but I am blessed with the means to help. As they say, ‘it takes a village’ and we are blessed to live in one of the best.”

Ursula is a local, having moved to the island with her late hippie mom, Jeannie Jackson, in 1973. “Mully Mullally was like my second mom,” Ursula said. Mully is one of several powerful ladies of heart who helped weave Langley’s community network into what it is today.

“I’ve always volunteered,” Ursula added, which includes volunteering her time nowadays to prepare homemade meals for locals. “This village raised me. “During the coronavirus I started posting pay it forward messages like, if people stopped arguing and started to say hi, we’d be better off. People started showing up on my doorstep giving me money. Judy said we could feed people at Brookhaven and those in the Homeless Coalition.”

Judy, a can-do woman with a lot of friends, started the Whidbey Island Homeless Coaltion, which provides temporary housing at the House of Hope, an emergency warming shelter for the homeless at the Langley United Methodist Church, and the Haven, a year-round nightly emergency shelter, at the Christian Reform Church in Oak Harbor.

“On my last delivery, a woman at Brookhaven broke down crying, saying how hard it was to accept help,” Ursula added. “She told me that people walk through Brookhaven and don’t notice the residents. I gotta say it’s a win-win doing this. It gives me something to focus on. You know how it makes you feel when Mom cooks at home? When you think of how taxed the food bank is, if more people did small amounts, we could really make a difference.”

The Good Cheer Food Bank usually serves more than 1,500 people a month with free food. With people out of work, the need for food is growing. Good Cheer’s thrift stores in Langley and Clinton provide most of the revenue Good Cheer uses to buy food, and with them closed at least until the end of the month, Good Cheer is asking for community donations.

“I’ve seen a lot of good in humans,” Judy said, adding that a local business slipped Ursula $500 recently to pay for the food she makes. “This is unique and less about right and left and more about joining people at the heart. Girl. I know it. People on Whidbey aren’t going hungry. The connection is happening. It’s a miracle the way the community has stepped up. Ursula is representative of those who are helping those in need.”

“I love Barry and Lilly,” Judy said. “They help the homeless. They are faithful friends. Faithful to our coalition. Their hearts are huge.”

“Judy and Ursula are unique beings in this special community,” Barry wrote in a recent text. “I think, honestly, I was just the person who highlighted what Ursula was doing, because I need to find hope in between the macro story that’s unfolding and how frail I knew people’s underlying financial security was. The writing was on the wall, and the deeper virus is one of many leaders … in both parties … not putting the needs of the middle and working class first.

“Ultimately, Ursula’s ‘the one in the ring,’ as they say. I have a Whidbey Homeless Coalition fundraiser going again, because it’s a group dear to us and Judy was brave enough to survive her challenges and live to drive the passion it took to get her baby on its feet.

“I feel lucky to be able to donate to both while I can. But the deeper truth is I could just as easily be on the need side of each story, and probably offering what we can is a silent prayer that we won’t be in the same position in eight months, a year? Part heart, part fear.”

As we wonder what our world will look like, Judy shared her thoughts: “My vision is a whole new world will emerge. This is our last chance to make things right. It’s where I want to put my attention. To manifest doors opening. I’ve seen it happen here over and over.”