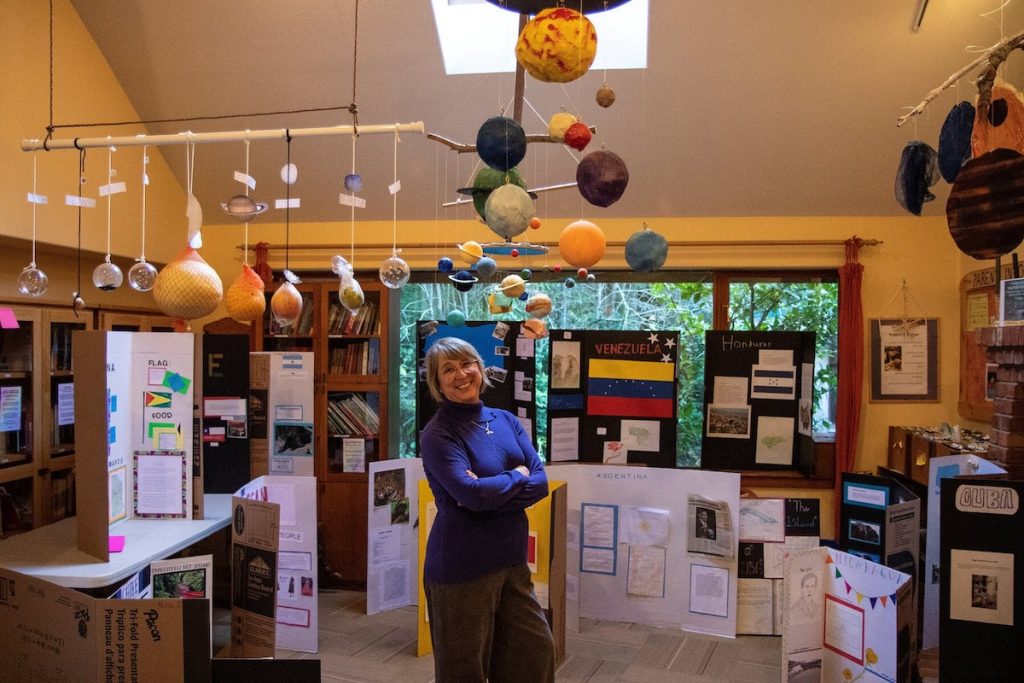 Spanish teacher Susanne Schnippering is surrounded by her students' work at the Whidbey Island Waldorf School.

Before the coronavirus changed our lives in a big way last week, middle school students were completing Spanish projects at the Whidbey Island Waldorf School. I stopped by to visit the place I used to work and still love last week. My journalist antennae knew a good story was to follow when I walked into the school lobby and saw it was transformed into an homage to our Latin American and Caribbean neighbors.

On display are creative mobiles and boards showing student projects on our neighbors south and east of our border. Although the school is closed for the time being, I spoke with Spanish Teacher Susanne Schnippering, who is originally from Colombia, and teaches grades 1 – 8.

“We have been studying geography of the Spanish speaking world—Central and South America, the Caribbean,” Susanne said in a phone call Monday. “A final project that students worked on is now on display. Students were given an outline. They chose a country, preferably one they didn’t know about or would like to visit. Required components were to draw a map, [research]  who the neighbors are, describe the flag and what it stands for. They were to choose three topics to look at in more depth. Let’s say traditional food or music or dance. Types of animals. Or a biome study of different rainforests, deserts. There was a written component where they wrote little essays about those topics. Ultimately we shared what they learned in classrooms. We had a little travel tour. Half the students exhibited. Half were tourists. They filled out a questionnaire. We held a treasure hunt to find out information from peoples’ projects.”

“It was ambitious,” Susanne added. “We started in January. Broke it down over the weeks. They had to go to the libraries (which are now closed). At the end we decided to share their display boards with the general community. Students brought and made food such as the tres leches dessert. That was fun. We would of had more events planned, but…”

Though the school is closed, consider making a recipe for Colombian Chicken Sancocho which is part of a student’s research on display in the lobby. The comfort food contains carrots, chicken, yucca, corn, onions, and potatoes, among the main ingredients.

Now that Gov. Jay Inslee has closed schools throughout the state, Señora Susanne is re-inventing her curriculum so that students can learn outside the classroom. The school will be closed at least through April 24th.

“We are switching gears now, it’s a whole retraining,” Susanne said. We will do some projects online. We don’t want children glued to the computer. We’re coming up with creative ideas and ways to keep in touch. Today I had an idea to do a correspondence thing. Maybe do mail with the kids. Or draw a map of their room, label everything in Spanish.”

Susanne and her family arrived on Whidbey Island three years ago and she began teaching at WIWS even before she moved into her current home. Her mother lives in Costa Rica, which is where Susanne spent much of her childhood. With experience of more than 20 years in teaching, Susanne was previously trained in the Montessori style and worked in New Hampshire for a number of years as a classroom and Spanish teacher. She’s taken students to Costa Rica in the past.

“I’ve taken several groups of kids to Costa Rica for field trips and they were life-altering experiences,” Susanne said. “A number of my students are now adults, teaching Spanish, going on to travel, working in environmental science. This (early immersion in other languages) is where the seeds are planted.”

Waldorf Education founder Rudolf Steiner believed learning other languages at an early age was essential to creation of a whole adult. Susanne said Steiner’s premise adds to her love of teaching.

“It’s even better that Rudolf Steiner believes children should be exposed to different languages when their brain is more open to learning,” Susanne said. “You’re teaching a whole culture, a whole way of thinking. That’s the big challenge—to bring a foreign culture alive in the abstract. Especially here on Whidbey where people are sheltered from international world.”

For the time being, our travel will be mostly virtual and I salute our teachers who are recreating how students learn in this brave new world.