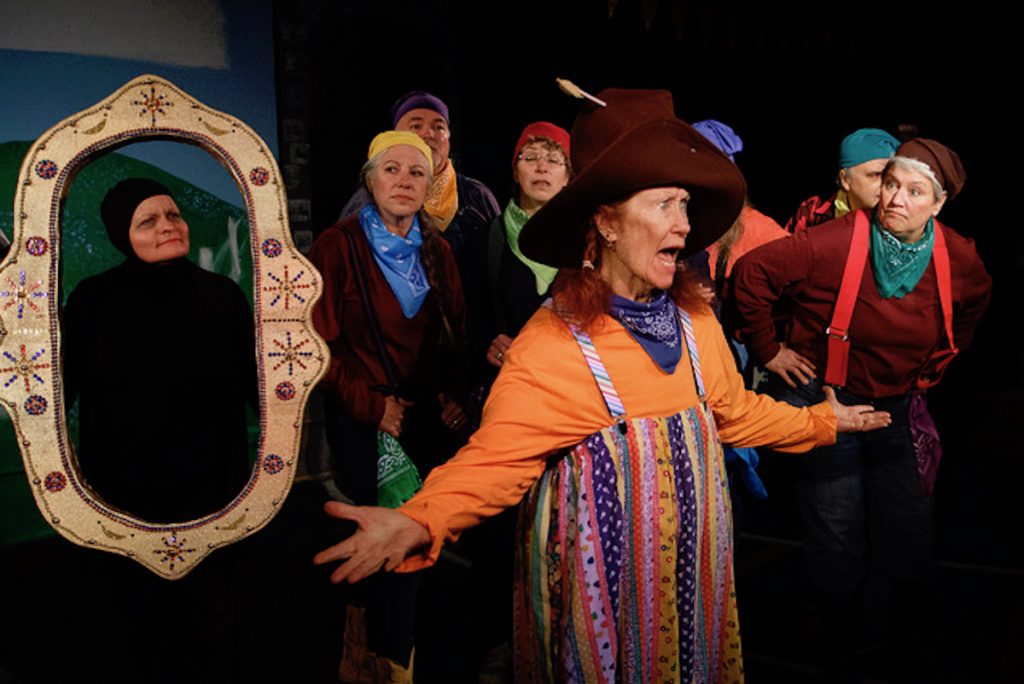 I’m hearing Elmer Bernstein’s classic theme to the Magnificent Seven as I write this story, and it is the opening score to a local panto about Snow White re-written with a western theme in Langley, Washington.

Pantos or pantomimes originated in 16th century England. They are fairy-tale-based musical comedies inviting audience participation and typically performed in England around Christmas.

Unlike P.T. Barnum’s famous line, “The Show Must Go On,” Snow White and the Magnificent Seven will be shelved until the coronavirus cloud has passed by. Originally planned as the season opener to run at OutCast Productions starting March 13 and running through March 28, the cast and director Melinda Mack concluded Friday night, March 7, it was best to play it safe with everyone’s health and cancel the play for now.

Giving a tearful hug to her husband Keith Mack, Melinda put on hold all the love, focus, costuming, choreography, singing, acting, and collective energy in putting this play on. In a show of generous spirit, the cast performed highlights of the musical, so we had a sense of the play to come. This is Whidbey’s David Welton and I laughed and applauded the talent. This week’s story is an ode to the power of community Melinda creates in her productions and a preview of the panto that we can look forward to.

In a phone call earlier this week, Melinda talked about directing this third panto. Previous ones included Aladdin in 2018 and Knight Fever in 2017. Knight Fever was based on King Arthur’s story. This year’s local production was adapted from a British panto, Snow White and the Magnificent Seven Dwarfs.

“Keith and I take a script—I got this one two years ago—and started taking a look, coming up with ideas to make it more local and fun,” Melinda said. “We do a lot of writing of jokes and pre-production. He has been a big part of the conceptualization and repositioning the show so it is vocal. He’s an amazing writer and comedian. I find the music, I rewrite some lyrics. I did 90 percent of the choreography. I do the costuming. We don’t have a big production team, although I will say Martha Murphy (founder of Whidbey Children’s Theatre) has done a great job on props. We have a very community-based feeling. I work collaboratively with the cast and want people to feel included. We have people up to age 75 in this cast.”

Casting talent who are often 55-plus, Melinda said she likes giving elders a chance to perform and created Never Too Late Productions as a way to showcase this age group.

“Keith, Hannah (the Macks’ daughter), and I hatched the idea of Never Too Late Productions in our kitchen several years ago,” Melinda wrote in a text. “Something Keith and I could do together in our retirement that could enrich the lives of other folks in their ‘Third Act’ of life. Truly a community theater group…no experience necessary…bucket list opportunities for folks over 50. We did Knight Fever and Aladdin as an independent ‘production company’ at OutCast. This—Snow White—was going to be our first show that was part of the official OutCast season!

“Our intention was to make opportunities available, say if you’re 55 can you play Jasmine in Aladdin,” Melinda said. “If you’re 60-something can you play Vince Charming (played by Jim Carroll in Snow White and the Magnificent Seven). Kathleen Jennings did our set painting. We’re skewed for an older, more accurate representation of our community. We have a blast. People are looking for upliftment. That’s what OutCast is doing this year: uplifting, heart-opening, coming together for enjoyment. It’s one reason why we do panto. If you’re looking for highbrow, this ain’t it.”

Snow White and the Magnificent Seven takes place on the Happy Ever After Ranch in the old days of Langley. Snow White lives with her evil stepmother Drusilla Blackheart, who can’t bear that at 18, Snow White is more beautiful than she is. The cast includes Sheriff Vince Charming and his horse Cupcake, and Silly Billy the Kid, who wish to save Snow White. The Magnificent Seven are former gunslingers who have taken to mining to avoid the wrath of Drusilla, whose cat they accidentally killed. In this story, Langley Mayor Tim Callison has sent the miners to the ‘Minor Leagues,’ as miner ‘Punning Pete,’ says. There are funny props using Whidbey puns, such as the sign which reads, “Windy Mirror Real Estate—Need a Home in Langley—Snow Problem.”

Playing the role of Drusilla Blackheart—“the baddie you love to boo,” says Melinda— is Kim Wetherell, a native daughter of England. For Snow White, Melinda found a $10 Victorian-style wine-red and black dress with corset and feather boa at a flea market, which fits Kim perfectly.

“Usually I play the princess or the queen—I was Jasmine in Aladdin, and Queen Guinevere in Knight Fever,” Kim said. “This time I get to play the evil one. I do some singing and a little dancing and a lot of people hopefully will be booing. Panto is very fun, especially in this climate; we need to lighten up.”

Kim recalled going to pantos in England as a girl:

“Every Christmas I went to panto. It’s a huge thing. You can compare it to everyone going to Nutcracker here in the states. No matter what one’s background is, panto really meets everyone. There is a fair amount of improv. Depending on what the audience says and does, the actor has a response.”

During a scene where Silly Billy, played by Annie Horton, is describing the evils of Drusilla to the audience who is booing her, the evil stepmother steps onto the stage, glowers and purses her lips to more booing.

“Also because of the age of our cast, you have to be quite foolish,” Kim added. “Keith is such a comedic genius. He throws out these lines that come off the top of his head. You have to be able to respond. In panto, anything goes. Gives you a lot of license to be silly. If you drop character, it’s funny. If you forget lines, you can make it part of of the scene, and say things (to technical director Chris Wilson) like, ‘Oh, Christopher, I forgot my lines.’ You need to be an even actor to have the courage to do this. That’s why people like Keith are so good. Melinda is such a a fine director. She holds so many people. With community theater, you’re doing the choreography, the singing, painting the set. She’s a personal friend and so easy and lovely to work with. I’d do anything for her.”

Teresa McElhinny enjoyed her roll as Shining Mirror, blinging up the foam frame and speaking in Western-accented rhyme: “Shining Mirror gives her answers and predictions in rhyming verse, so it’s slightly easier to memorize my lines that way. My son texted that I should have a lot of opportunity for self-reflection in this role,” Teresa wrote in an email.

At one point the cast dances to hoe-down music. It is a tune Melinda’s fiddle-playing dad recorded.

At the end of the evening’s performance, Keith mused about the coronavirus pandemic and its impact on our lives.

“Maybe this is a way people can really connect,” he said.

Based on the bonhomie of the cast and their director, the connection was seen and heartfelt. And funny.

Melinda adds, “How do I support people on stage so that they feel successful and primarily have fun? If if feels like we’re not having fun, I stop and say, what do we need to do. During the process we’ve had people who have had family emergencies, siblings who have died, ultimately everyone is on the same path; that is we’re doing this to make a difference in our lives and others’ lives. I’ve thought about fan mail from people who come to our shows. Our inner children are served well by panto. There is something for everyone. Even adult humor that will go over children’s heads. Kids will relate, like Silly Billy the Kid. The audience likes to boo and hiss. So do grownups. To sing along and be invited into our world. With 18 people in the cast, you feel the connection. It is important. OutCast Theater is about being community-based. I love that about them. It’s a small intimate theater. I refer to it as our clubhouse. (OutCast Co-Director) Ned Farley holds the space. I love that about Outcast. We’re putting on a show. It’s a wonderful venue. We love being there.”