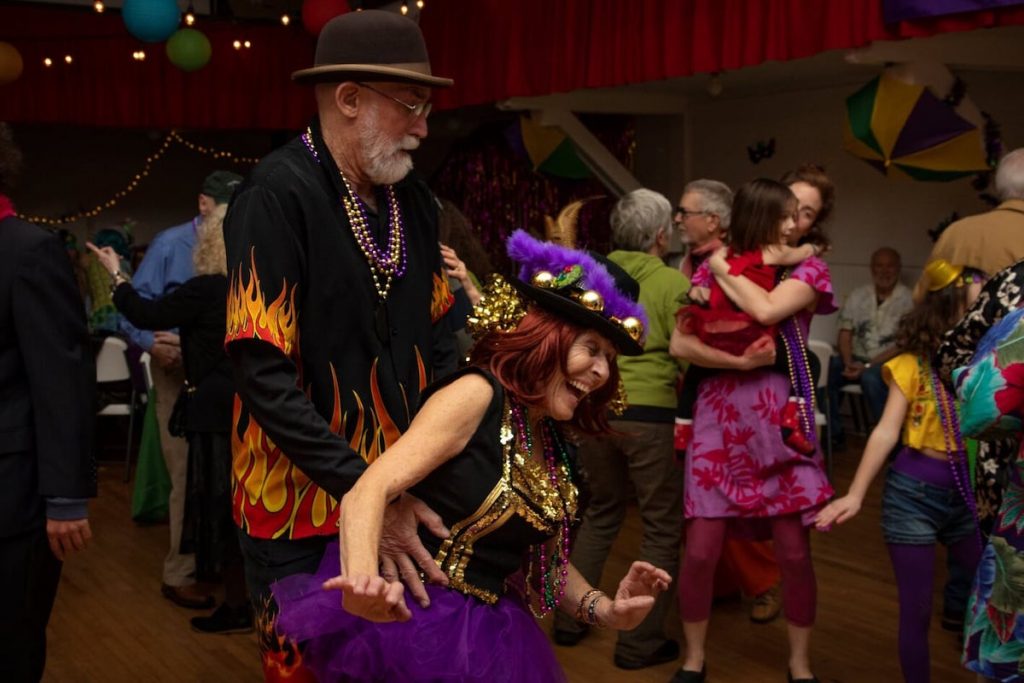 As a prelude to these forty days of reflection and abstinence during the Christian season of Lent, South Islanders celebrated Fat Tuesday this week in their own version of Carnival and Mardi Gras at Bayview Hall.

Sami Postma, Events and Education Coordinator for Goosefoot, has a knack for setting the stage for a great party. “All I do is decorate the space, get a great band together, and our community makes the energy,” Sami said in a phone chat today. “The band was Ken Pickard and Zydeco Explosion.” The band is a favorite of the annual bacchanal and has performed at past Mardi Gras bashes. “Thanks to everyone who donated a prize and to those who made this a fun event.”

Mardi Gras began in 1600s France, commencing at Epiphany in January and continuing through ‘Fat Tuesday,’ the day before forty days of Lent begins. Fat Tuesday traces its origins to Boef Gras, or the fatted calf who served revelers. Carnival in Brazil begins the Friday before Ash Wednesday and continues till midnight on Fat Tuesday. The word carnival owes its origin to the practice of not eating meat during Lent. Lent in Catholic and Christian faith, is a time for reflection and abstinence, a reminder of Christ’s 40 days of reflection and abstinence in the desert.

Now in the year 2020, Mardi Gras is a chance to shake it out and get down.

Fire-eating dance man Matt Hoar took first place with his head dress. ”I wanna thank Jade Logan for teaching me how to make headdresses,” Matt writes on David Welton’s Facebook page. “And the pirate in the background ‘Kill Devil,’ aka Bexar O’Riley, for the comradely and all the pirate juice.”

Hahna Luna, who hosts Fairy Magic Center Entertainment events, also commented on David’s Facebook page: “I love Whidbey events In so many ways, they always feel safe, genuine, and lots of joyful creatives! I went with two of my besties and just danced for an hour and half straight. This is a precious reality I appreciate in contrast to being from a metropolitan/urban area in Cali, and what it’s like in Seattle night life. Whidbey is a GEM and now that the generations gaps are being filled with more youth and families, it’s just getting better!!! I am grateful for our elder population. They are fun and heart centered for the majority!!!”

Next event to look forward to: the public is invited to Goosefoot’s community festival celebrating the 50th anniversary of Earth Day. The April 4th festival kicks off the celebration of Whidbey Earth and Ocean Month with promotions for Earth-Day community events. The actual Earth Day is April 22.