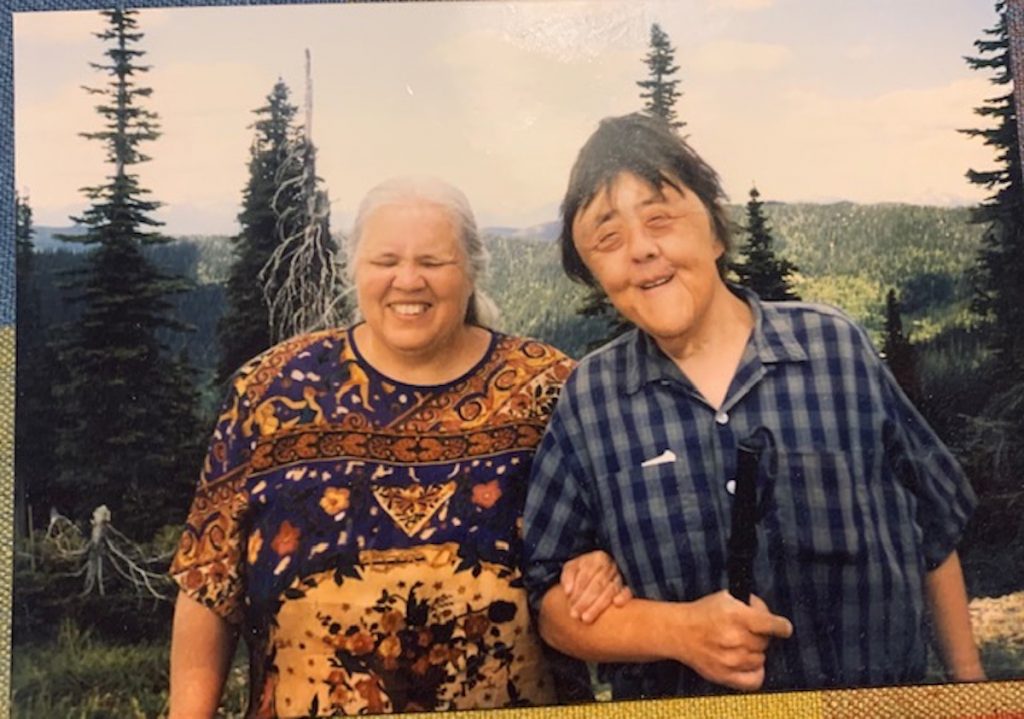 Janet and Fred Bixby. Janet passed away in 2006. When ever Fred mentioned Janet, he would light up. Photo shared by Jayanne Bixby

One of my truest friends died this week and my heart aches at the loss. Fred Bixby, who would have been 80 this May 30, breathed his last in the early morning of February 20. He had been feeling unwell of late and not healing from a femur that broke in a fall last year. On Tuesday he fell again and was airlifted to Harborview Hospital, where he was placed in comfort care.

On his last day alive, I joined his daughter Jayanne, and a family friend Serena, to say goodbye to Fred in a room with a view of Smith Tower, sparkling water, flying gulls and pigeons. We cried. We told funny stories. We put our hand on Fred’s heart and held his hand. We marveled at the kindness of the nurses who cared tenderly for Fred, ensuring that his remaining time was peaceful.

Fred was born in Montana with a rare genetic condition, Apert’s Syndrome, and limited eyesight. His parents moved to Portland when he was young and Fred lived in a big old wonderful house owned by his grandparents. At an early age he had a private teacher, and as he grew older, he went to public school and a school for the blind. He made friends, had a good sense of humor, learned skills, loved the outdoors, and went on to earn a Master’s degree from the University of Oregon. He traveled to the Midwest with a fearless blind friend named Dan who helped Fred get work in counseling in Chicago. Fred has said many times that Dan really set him free to believe in himself. Fred met a strong-willed blind woman named Janet, who worked as a magazine editor. She was also a tireless advocate in promoting rights for people with disabilities and a practitioner of the Baha’i faith. Forever afterwards, Fred’s life took on new heights and meaning as he and Janet married and raised their daughter Jayanne, now an excellent children’s librarian for the Langley and Freeland libraries. Fred and Janet faced ignorance and prejudice by taking the high road and they attracted real friends along the way. After Janet died in 2006, Fred and Jayanne moved to Whidbey Island to live close to his cousins Brad and Alan Bixby.

I met Fred at a library friend’s good-bye party in the summer of 2012. We felt the instant rapport of friendship. He helped me find a hidden voice and was the first person to ever propose writing a novel together. Since 2015 we have written two young adult novels and were at work on a third in the series when he fell last year. On the verge of getting our first book published through Amazon, I reminded Fred last Friday that I needed his dedication. I brought over a Wild Crow pie for Valentine’s Day. Fred loves pie. I hugged him goodbye, not knowing it was the last time I’d see him conscious. At our poignant good-bye to Fred at the hospital this week, Jayanne said one of the last things her dad did on Tuesday was write the dedication. I look forward to adding his words to the beginning of our book. Our first novel is called Earth Whisperers: Into the Realms. I will let you know when it is published. One of my favorite characters in the book is Janet, who plays a wind spirit in a parallel universe. She acts as a guide to a pair of Earth visitors on a quest. She is Fred’s Janet and his love for her is evident in his words.

Fred and I joined the Reading Glass Writing Group, which meets every Wednesday to read and critique one another’s stories. Fred and I gained much insight on rewriting and strengthening our story. I have moved on, and Fred stayed with the group, submitting chapters of his autobiography. I’d type up the written comments his colleagues made and send them to Fred, where he would listen to  the words read by his ‘invisible narrator,’ a software that reads words for the sight impaired.

Our family spent Thanksgiving with Fred and Jayanne and their other friends. Janie Pulsifer, from the Reading Glass Writing Group, joined us at the holiday table.

Last night Janie sent an email recalling her friendship with Fred: “It was a November Wednesday and I was taking Fred home from our writing group. ‘What are you doing for Thanksgiving,’ he asked. ‘Staying home and getting things done,’ I replied. ‘Why don’t you come have dinner with us?’ he asked.

“This was Fred. He had a wider view than just himself,” Janie added. “The feedback he gave on my short stories reflected his training as a counselor. He would write notes about the inner thoughts of my characters and their interactions with other characters – comments I got from no one else in the group. I told him that one day, and I’m so glad I did. Back before the stress of breaking his hip, Fred and I would talk more in depth about some story one of us was writing. He listened and he thought. Sometimes he just affirmed; sometimes he had something insightful to say. When we were both too tired to talk as I drove him home – and talking wasn’t easy anyway given the limitations of Fred’s hearing and my noisy car – somehow connection happened anyway. That was Fred.”

C.Lee Sage, another friend in the writing group says: “I’m so sad to lose Fred. He was a definite highlight in our writing community. Even after taking an extended break, I’m fulfilled by the camaraderie and support we share. And I want to read more of his thoughtful and fascinating biography. I hope Jayanne wants to complete it.”

Wayne Ude, a retired creative writing professor and published author, is the informal group leader with the most to say. On Fred’s passing, Wayne writes: “I’m very sorry to hear this. I’ve known Fred for only these last few years since he became an important member part of our writing group. As I read and responded to sections of his memoir, I came to admire him even more for the quality and fearlessness his life has shown from the beginning. He continued to grow as a writer, as the memoir shows his continuous growth as a person. He will be missed.”

A while ago, Fred organized a group of writers to collaborate on a collective novel, one where a writer would take up the thread of the previous writer. It was an interesting experiment. One of the women in that group is playwright, director, and author Teresa McElhinny. Fred got to know Teresa and her husband Robert, who is profiled in a story about ingenious characters. Fred, Teresa, Robert, and I were supposed to meet last Thursday for coffee. But Fred wasn’t feeling up to it.

“I met Fred several years back when he posted a drewslist ad about wanting some fellow writers to join him in composing a collaborative novel,” Teresa wrote in an email. “Four of us worked on it for a while. I was only able to continue with the novel for about four or five chapters, but certainly became a fan of Fred Bixby from that time on. My husband and I have had opportunity to socialize with Fred and his daughter Jayanne only very infrequently, but always enjoyed his graciousness, and felt truly blessed whenever we were in his company. Fred had also assisted greatly as a beta reader for a different novel I’ve recently completed. Since he couldn’t see, Fred could hear on the computer where I had mismatched points of view or something didn’t sound quite right, when I hadn’t ‘seen’ the problem. He was always so very encouraging, too, rooting for or boo-ing various characters, totally into it. His help that way was so appreciated. When you told me he wasn’t feeling well, I was so glad Robert and I would have a chance to talk to him and encourage him last week, the way he had encouraged me/us. So very, very disappointed that he wasn’t up to getting together socially that day, especially given that we won’t have another opportunity to do so in this realm. The news of his passing has hit us both in the emotional solar plexus. Such a sweet, gracious man. I know that he had strong opinions about certain situations and events, etc., but I never heard him denigrate any individual. He never spoke ill of anyone in my presence. And the way in which he ‘saw’ people and things so intuitively was inspirational.”

Robert McElhinny adds: “Fred was a gentle soul who seemed to care and have a big ❤️ for everybody. The Bible verse about entertaining angels unaware may have been true in this case. I think Fred was an angel. Dear, kindhearted, gracious, talented, encouraging, gentle, supportive, insightful, intuitive Fred. You will be sorely missed.? I hope you are as appreciated and respected in “the next realm,” as Kate says, as you have been in this one.

Island emcee and court jester Jim Freeman, a man Fred knew and liked, writes, “Wow this is a stunner and a shocker. Bless you both for being there with him and for him and by him. Fred is the kindest man I have ever met. Fred’s name should follow the word kindness in every dictionary, in every language. Surely God just put Fred in charge of something glorious. Thanks ever so much for asking, an honor it is.”

Fred loves trees. He has traveled to great woods with his daughter. Fred and I visited Earth Sanctuary a few times, where Fred sat on a basalt stone amid a stone circle of basalt towers and just downloaded the nature all around him. Fred recently donated a small sequoia tree to the EarthSanctuary so that it would have a forever home.

On learning of Fred’s passing on, Earth Sanctuary founder Chuck Pettis emailed: “So sorry to hear about Fred.  Condolences to all in Fred’s circle.  May Fred be relieved of suffering and then have a happy rebirth.”

Today I am grateful that Fred let me get to know him and considered me his friend. Though his sight and hearing continued to dim, his heart spirit became brighter. As his health failed, I found a deepening appreciation of his gifts and treasured our time together. He smoked often and I recall watching in amazement as he’d put the end out and pop it in his pocket to smoke later. His voice reflected the many years of smoke seasoning. I always thought he’d be a great narrator for the teen boy character in our book. His doctor asked if he thought of quitting smoking recently and Fred said, “Nope!” Smoking was a part of what defined him.

Today in Snohomish we celebrated Fred’s life. His place in the cemetery has views of Mt. Rainier. At one point when his friends Cynthia Kaul and Keith Anderson sang, Angel Wash, skeins of several hundred snow geese flew overhead. We wrote messages on the lid of Fred’s simple wood burial box, placed scented-flowers over the lid and said our goodbyes. A day we’ll  carry always with us. Lucky us to have Fred in our lives.