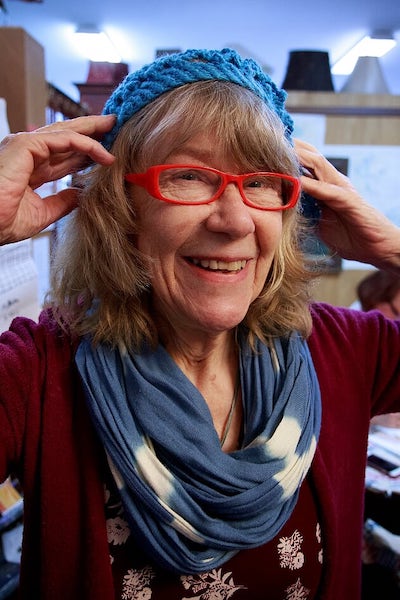 Many of us know and love Carla Walsh from Casey’s Crafts, a creative woman who inspires us to find our artistic self. In collaboration with the Clinton Library Carla teaches an art class once a month at Second Hand Booty, a fun store owned by a man who loves to be a pirate whenever he gets a chance.

In a cozy room around tables draped in fabric Carla designed herself—colorful scenes with images of her dear departed dachshund Abigail and a large handsome cat with an Italian name, Mario Rico—art supplies wait to be moistened and painted on watercolor paper. We are here to learn how to draw a rose and use watercolors to make a bookmark.

Carla’s granddaughters Ashlee, 12, and Halee, 8, are comfortable as teaching assistants, effortlessly showing the students how to sketch a rose. Grandparents and teens, old students who Carla’s known for years, a grandmother and photographer who haven’t painted since they were young, sit at the tables. We draw a swirl, “like a cinnamon roll,” followed by a large ‘U’ below, a triangle for the base. We learn how to draw the lines for a vase, how to ground it by drawing a table, and how to frame it with a window, a moon looking in—“Full,” Carla muses. It’s a Leo moon now. Can you feel the gravitational pull?” Looking at her granddaughters, Carla said, “I love working with kids. I get along with kids and dogs.” 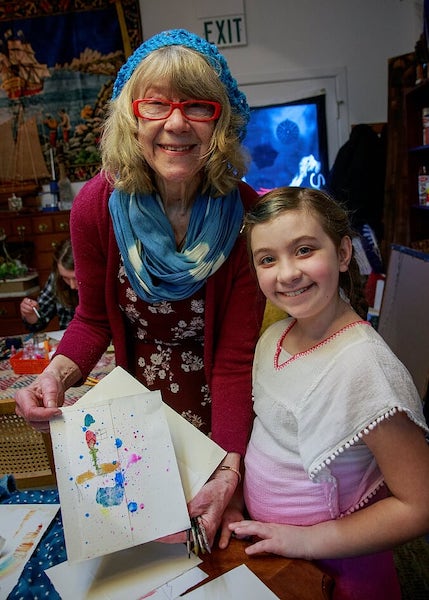 Carla and one of her granddaughters Ashlee, 8, find art even in the paper where one’s brush painted past the edges

“We’ve been with Carla a long time and started this program of crafting once a month,” said Clinton Library Manager Debby Colfer. “One of my favorite things is this gives people permission to learn to paint. Part of this started as an after school early release program. Then the grandparents and parents said they wanted to play, too.”

Dominick 10, arrived, fearless, and ready to paint. His grandma Sharon gave it a try while his grandpa sat and watched the students bloom as their made their art.

At Casey’s 28 years, and an island resident since she was 15, Carla says she developed a photographic memory of students and customers and what they’ve bought at Casey’s. When a student asked her about the cheery colorful cloths on the tables, Carla says: “I’m a fabric designer. There are 21 fabrics that traveled the U.S. All fabric designs use wax. I’m a batik artist in cloth. Abigail the dachshund will remain forever in fabric.” 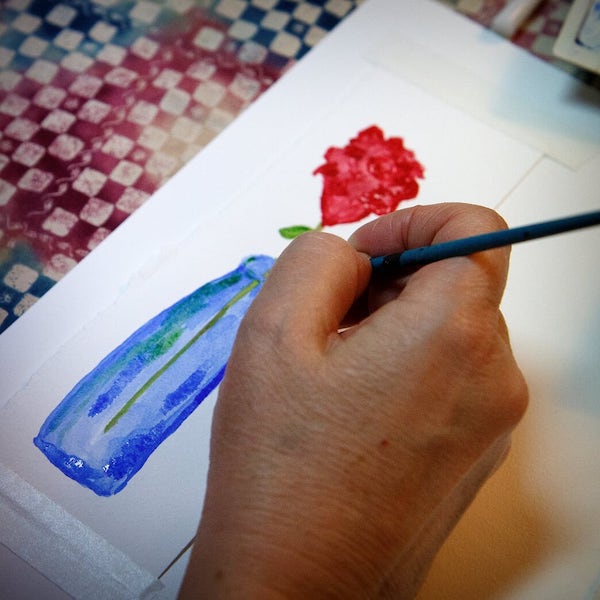 We learn techniques of dabbing our brush on the blocks of color. We learn that using the other end of the brush, we can make an indent on the watercolor paper to hold the color in a kind of reverse embossing. The atmosphere takes on a feeling of magic, students see their work develop before their eyes. Dominick crows, “I’m so creative.” A family Carla has known a long time came in to see her. MJ, now, a student at Shoreline Community College, paints a rose surrounded by blue hues that Carla said brought to mind the Madonna. 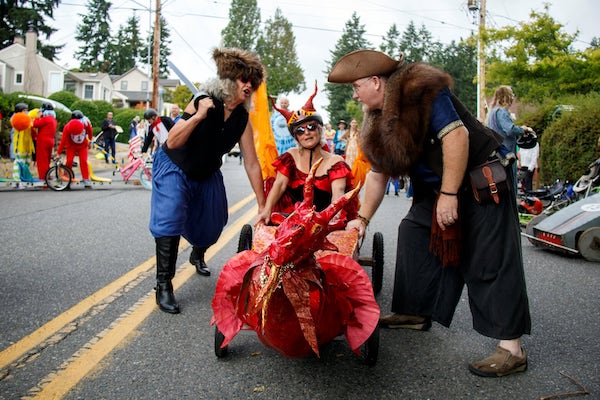 Dustin Yongue, who is the pirate behind Second Hand Booty, opened the store in the same center where the Clinton Foodmart is last May. “I kinda snuck in like a pirate story,” he said. A former manager of a mainland Habitat for Humanity, Dustin said that now his shop is there to anchor the strip of storefronts, others are coming in as well, including a children’s dance studio and a bookstore.

While Carla’s classes filled the space—sometimes with 20 or more students at the tiny Clinton Library–Debby said after learning that Dustin opened space in his eclectic store for tinkerers to meet, an idea clicked for Carla’s classes to be moved across from the library where there was space for more students.

We chat and visit and paint and watch our creation unfold. “My loving grandma,” Dominick says to his grandma Sharon, who was painting next to him.

Carla advises spattering paint with a toothbrush, scattering salt on the paint, to create ‘stars,’ to create interesting effects.

Debby Colfer gets a comment for wearing a jacket with colorful peonies. She smiles and says she likes to wear accessories to compliment Carla’s art classes. “I wear earrings with tire swings when we have classes for Earth Day,” she says. “Art is good for the soul and this is an opportunity to be together. Dustin has Thursday afternoons here for creatives to gather. The Whidbey Island Sketchers meet now and then to sketch the many interesting things  at Second Hand Booty.” 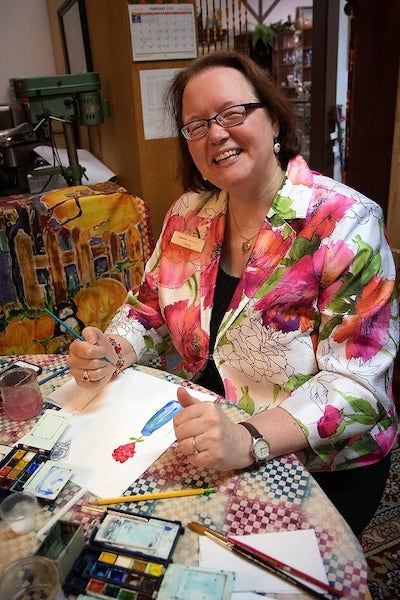 As the class drew to a close, Carla, lifted by the happiness she created, says, “I’ve been doing art forever. I don’t seem to go away.”

The island’s libraries host a number of events that give us permission to be creative. Check out these sites: Clinton Library, Langley Library, Freeland Library, Coupeville Library, and Oak Harbor Library.

Meanwhile, Carla’s classes meet the first Saturdays from 11 til noon in the back room of Second Hand Booty.