Riding the bus with Maribeth 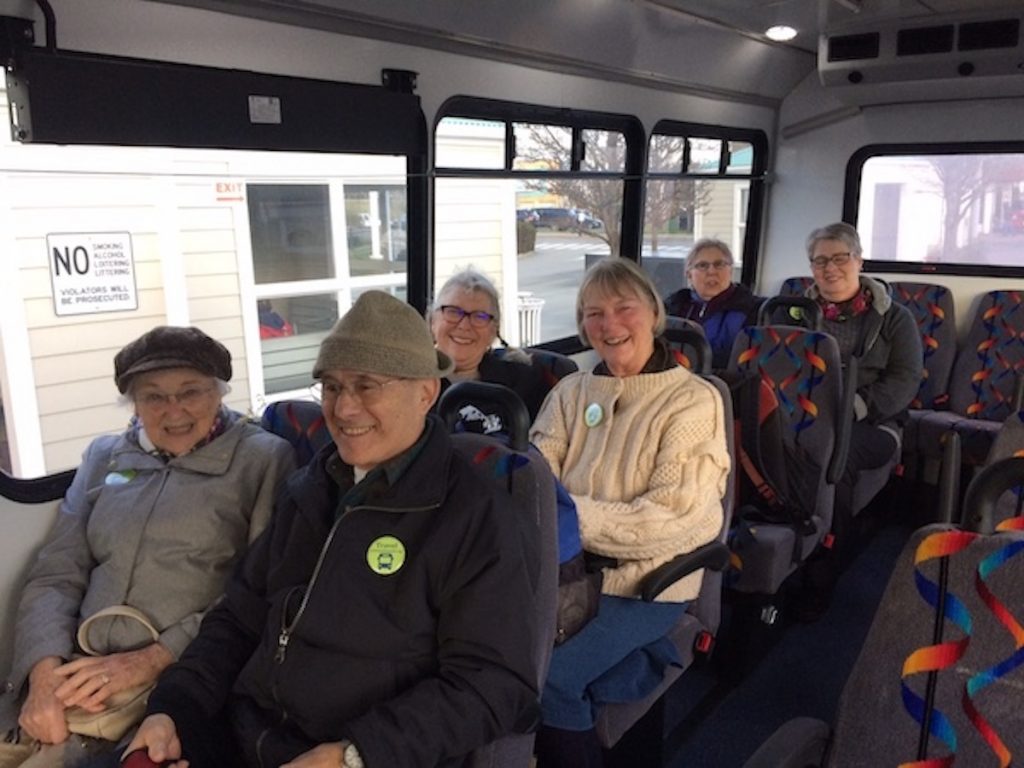 Note: our photographer David Welton has the week off.

One of our island’s great community benefits is Island Transit. Folks ride the bus for zero fare Mondays through Saturdays on Whidbey and Camano islands. The county-wide transit system hosts monthly ‘Ride with a Guide’ outings so folks can meet fellow islanders and learn something new along the way. Maribeth Crandell is the agency’s guide for the ride and is skilled at engaging people and bringing them together.

I was interested in joining Maribeth on the January 24th field trip, ‘Book Lover’s Bus Tour.’ I happened to learn about it while shopping at Kingfisher Books last weekend buying Maribeth’s 2019 book, Hiking Close to Home: Whidbey, Fidalgo, and Guemes Islands, which she co-authored with Jack Hartt, a former manager of Deception Pass State Park. The bookstore’s co-owner, Meg Olson, mentioned Maribeth’s monthly field trips and I thought this would be a fun experience.

Meg and her husband Brad Olson bought the building a couple of years ago from its former owner. The couple lived in Point Roberts — accessible by driving through British Columbia, yet still in Washington State — before their arrival in Coupeville. Brad is originally from Saskatoon, Saskatchewan, and Meg from San Francisco. They met at a pub in Vancouver, B.C. They love maps, birds and books. The couple are well-matched, interesting, and compliment Front Street businesses in Coupeville.

Being a retired Sno-Isle Library employee and lover of reading and writing stories, I joined Maribeth, Island Transit’s Mobility Specialist, for a ride with five other travelers to visit libraries and bookstores in Coupeville and Oak Harbor. Maribeth enjoys her role in the community. Past summers as a guide with Country Walkers, a curated walking tour company she worked with, taking tours to Olympic National Park and the Columbia Gorge, influenced her ease with hosting trips nowadays.

We met at the Coupeville Library, where Maribeth had arranged for us to meet a young local author, Audrey Mackaman. Her book, Cavall in Camelot: A Dog in King Arthur’s Court, was published in 2018 through HarperCollins Publishing. A second juvenile-aged book in the series, Cavall in Camelot: Quest for the Grail, was published this year. A third book in the series is being written in between Audrey’s job as an editor and occasional dog sitter.

The story’s main character was inspired by Audrey’s late dog and her love of dogs in general. Her book is dedicated to: “Anyone who’s ever loved, and been loved by, an animal.” Audrey shared her surprise in finding a literary agent who connected her to the publishing giant. She said there were tradeoffs in working with a major publisher, in that much of her original work went through many revisions before being distributed for sale. She admired the professional illustrations on the books’ covers and within.

Later Brian Haight, Circulation Supervisor at Coupeville Library, spoke about the library’s being a flagship building, with its welcoming ‘living room,’ lit by a fireplace, and how the library was remodeled following a $2.3 million bond passed in 2008 and completed in March 2010 incorporating green building standards such as a rain garden and solar panels. He talked of library services, such as remote printing, and Book a Librarian, and the upcoming Trudy Sundberg lecture series featuring Dr. Mona Hanna Attisha, a Flint Michigan pediatrician who raised awareness about her city’s poisoned water system.

The weather gods treated us kindly with sunshine as we walked from the library to catch the #6 bus northbound, which took us to the Harbor Station Transit Center in Oak Harbor. We rode in a ‘Baby Gillig,’ a 35-foot-long bus, considerably shorter than the big #1 north-and southbound vehicles. Along the way Maribeth asked riders transit trivia, for which they won bling in the form of fluorescent wristbands with Island Transit printed on them.

From there we walked a short distance to Wind & Tide Bookshop, where we met owner Karen Mueller, who has been running the Old Town shop since 2011 in a building originally built in 1932. The welcoming store has one of the most creative bathroom accessories I’ve seen yet. Karen mentioned that children’s books Goodnight Moon and Dr. Seuss books continue to be best sellers. Local authors’ books and books on the area, along with a used book section are on display.

Heading back to the transit station, we boarded a local city center bus, which took us to the Oak Harbor Library, where we were greeted by library manager Jane López-Santillana. Jane shared that library patrons can stream movies and documentaries through digital media providers such as Kanopy, Hoopla, and OverDrive Videos. Jane mentioned that a number of programs are piloted at the library, the largest on the island, which serves a population of about 25,000 along with navy families. Jane talked about the many children who are patrons and the library’s six story time programs a week. There are popular family trivia nights once a month, which can draw crowds of nearly a hundred. We oohed and aahed the artwork in the pleasant green-painted children’s section. The library carries a good-sized collection of international books in languages such as  Spanish, Japanese, and Tagalog, the language of the Phillippines.

Before long we were heading south to Coupeville to visit Meg Olson at Kingfisher books. She made hot coffee and served visitors cookies while author  Eldritch Black, spoke in a London-accented voice about how he came to live on the island a decade ago, after meeting his wife, a Whidbey islander. Eldritch has written six young adult books with titles such as, The Pirates of Penn Cove, which tells the tale of Dylan Wylde, whose family moved him to Whidbey Island with his bullying brother. Dylan’s adventures take him on a journey to find a lost pirate’s treasure and a mysterious secret society.  Meg Olson said Eldritch’s books are popular sellers, both for adults who enjoy reading young adult novels, but also for visitors who buy the books for the children and grandchildren. After signing his books for the visitors, it was time to head home. The sun was tinging afternoon clouds in pink and shining golden on the north cliffs of Penn Cove.

Ride with a Guide’s next trip is Feb. 4, which includes a visit to our mainland neighbor, Mukilteo. Guests can visit the Rosehill Community Center and hear a lecture from a UW professor, visit the city’s historic lighthouse and learn about the proposed new ferry terminal and its connection with buses and trains. Future trips include a La Conner Daffodil Tour in March, A Rain Garden Tour in April, Our Whidbey Historic Buildings in May, and a Camp Casey Open House in June. RSVP by calling 360-678-9536 or email travel@IslandTransit.org.