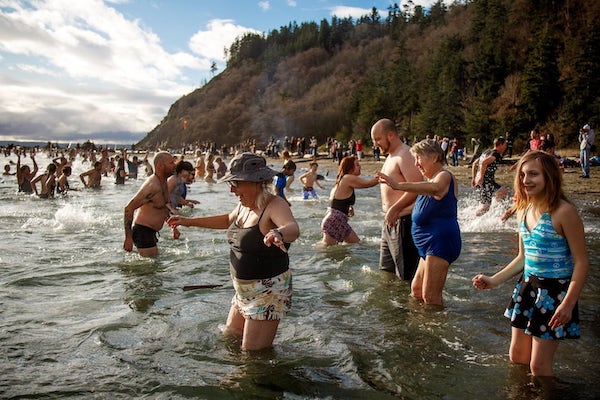 I never thought I’d have the courage to do it, but I started the year with a cold dip at South Whidbey Parks and Recreation’s and the Island County 4H Teen Leadership Club’s annual polar bear plunge at Double Bluff Beach. More than 150 folks joined in on a warm-for-January first, fifty degree day. The energy was catching and powerful, making me feel like I could be fearless for 2020! Our photographer David Welton stood in his jeans in the 47.5 degree water to bravely capture the scene. Bravo, David! 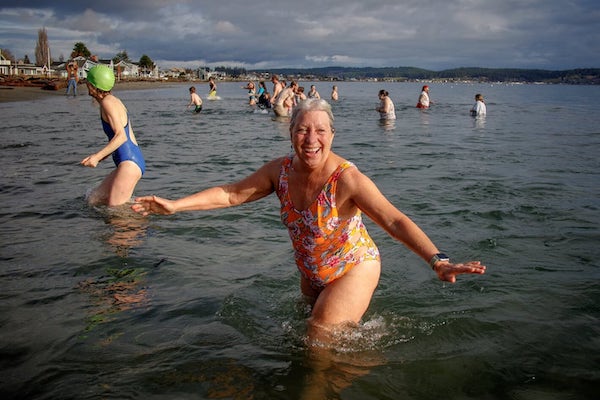 Sharon Emerson is joyous following a dive in the 47.5 degree water

The hardest part was thinking about how the cold would be. The plunge itself was thrilling. Cold? Yes! But exhilarating, too. I only dipped hip-deep, while friend Sharon Emerson went for a deep dive. Long afterward, I felt the water’s tingle of life on my legs. I loved the collective community energy of the crowd, including friendly Karen, a retired teacher who took the plunge with her son, bringing in a new year with a terrific ritual. The fifteen buck entrance fee benefits our island 4H club. Other sponsors included: Island Roofing Systems, Mukilteo Coffee Roasters, Useless Bay Animal Clinic, Clinton’s Les Schwab Tires, All Whidbey Topsoil, Pickles Deli, Whidbey Coffee, Greenbank Construction, Savage Screen Printing & Embroidery, Freeland Cafe, Whidbey Island Bagel Factory and Whidbey Weekly.

Local EMT’s were on hand in case any injuries occurred. Terry Welch, an EMT from Station 35, reports all was well. Folks warmed by the fire, drinking hot coffee and hot chocolate. My husband brought our little solar shower tent, so I changed out of my wet bathing suit and into warm dry clothes.

Afterwards, folks like Bexar O’Riley, dressed as a pirate, warmed up by the fire.

Later while drinking coffee with my husband Bill, son Raymo and his doggie Rogelio, we tailgated in the sun in the back of our Ford Explorer named Bertie. Raymo’s Grade 4 + 5 teacher Heather Dubendorf stopped by to say hello with her family. A great reunion for one of our son’s favorite teachers.

May you take the plunge into your most courageous self and cultivate community this year!