By facing our feelings of grief instead of burying them, we can feel less alone and more connected with life. 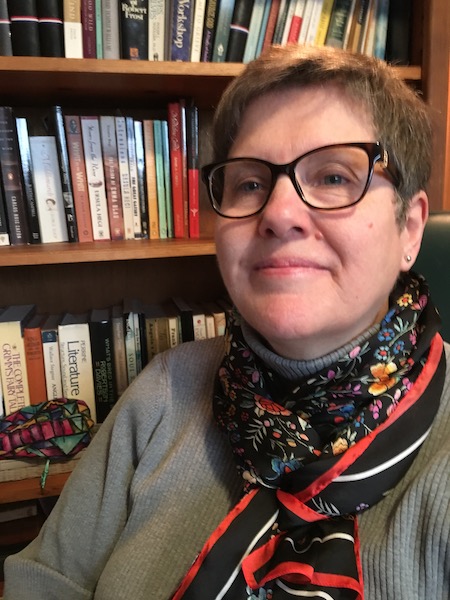 Susan Cyr, a licensed mental health counselor, has found her niche in grief counseling for bereaved parents. With an established practice in Shoreline, Susan recently opened an office in her Langley home. We chatted in her sunny living room the day after Thanksgiving. After our two-hour chat, I came away feeling lifted, though we’d just talked about pain, fear, and death. What we did is connect on an honest level that is balm for the spirit.

“In my view, grief avoidance is an outgrowth of death avoidance, which is our culture’s norm,” Susan said. “It is detrimental to us as individuals, in our families and in our larger culture, to pretend we are immortal, that death will never touch us or our families.”

As a practicing mental health counselor since 2013, Susan earned a Master’s in Clinical Psychology in 2008 and later became an ordained interfaith minister. With experience as a hospice volunteer following the death of her parents, Susan’s work later evolved into becoming a counselor who deals in grief and traumatic death.

Susan and her husband Craig Cyr lost their son Spencer to suicide in October 2014.

“I didn’t work for two-plus years after he died,” Susan added. “When Spencer died, I didn’t have the capacity for other thoughts and feelings. It was exhausting. Grief took all the cognitive and emotional and physical energy I had. I felt encased in ice, and still do at times. Grief is physical, mental, cognitive, emotional and spiritual. Even when something joyful or lovely happens, most bereaved parents say grief is like no other experience. It is always there, whether you’re laughing or gardening. It rides along side everything you do at all times. All my clients say this. As far as the trajectory of my own work, after our own son died by suicide, it became the most important thing to me to be of support to people in grief, and that is what is what I do. I see clients individually and have support groups.”

Susan sees clients who have lost siblings, spouses, and parents, as well as children.

Parents who lose a child to suicide, drugs or murder may feel alone and looked at as someone who failed to do right by their child, Susan said. These feelings are shared in group and individual counseling. 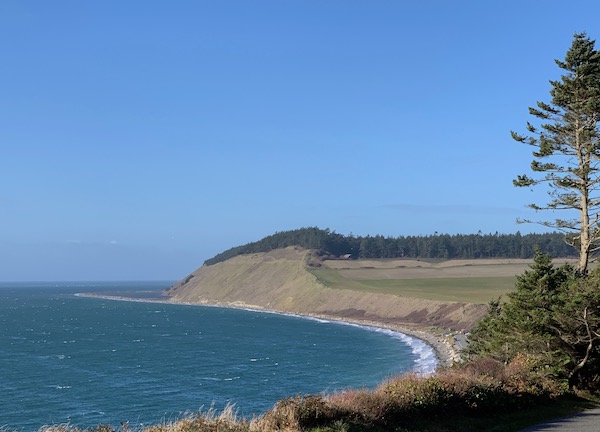 Susan and Craig find walks at Ebeys Landing to be a source of local comfort. Photo by Shelley Black

“Knowing that someone else can hear and listen compassionately is huge,” Susan said. “Yet bereaved people feel isolated and they are afraid of bereavement themselves. Many non-bereaved parents are afraid, thinking, ‘If that parent could lose their child so could I.’ People get afraid to talk about child loss. We think the pain is too big to handle, yet we can find ways to tolerate it by tending it. Megan Devine wrote, probably, the best book on being a bereaved person: It’s OK that You’re not OK. The synthesis of her book, with which I totally resonate, is in this sentence: ‘Some things cannot be fixed, they can only be carried.’”

“First, I hold a view that we humans can trust the grieving process itself to lead us in our grieving,” Susan said. “I do not view grieving as depression. It is a natural reaction to profound loss. Grief is not a disorder of any sort. There is no time limit on grief and it usually lasts a lifetime, because love itself lasts a lifetime. I view each client—whether in individual or group settings–as the expert on their own process and encourage each person to allow rather than suppress their grief. Allowing and tending actually bring comfort to a grieving heart.

“A group would start with an opening, perhaps a small reading. Then we go around the circle and everyone gets a chance to share uninterrupted as much or as little about their process. Every person gets a chance before there’s cross-talk. Then the circle is open and people talk to one another. My experience is sometimes people cry. They may talk a lot. Sometimes they gain comfort by sitting shoulder to shoulder with other bereaved people and not speaking. 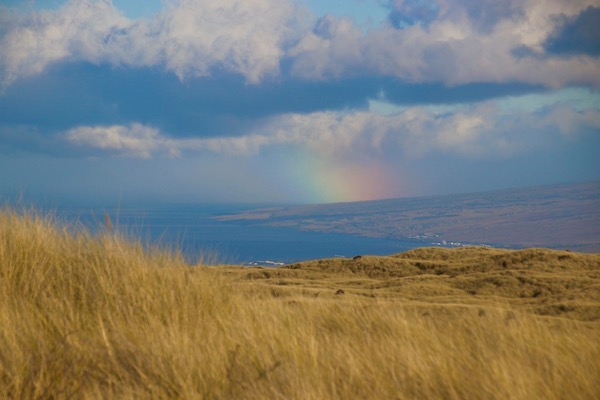 Spending time in nature can be a tonic to bereaved parents. Photo shared by Larry Neubauer

“Group sessions usually last two hours. People benefit from simply being in the presence of other bereaved people and sharing what that’s like and understanding beyond words. I’m the facilitator in the process. I am the companion and help with understanding and normalizing things that seem extremely intolerable. The level of grief is so raw and so big that they feel like it is intolerable. But in fact tending to one’s grief and being with grief in a real way results in people being comforted and calmed.

“Ground rules in my groups are some basic ones regarding no advice giving, confidentiality and respect. Additionally, I ask group members to speak of their own philosophy or spiritual experience in such a way that they do not assume others in the group share their philosophy. I ask that any reference to spiritual or philosophical beliefs be prefaced with a simple acknowledgement that ‘these are my thoughts; this is my experience.’ In so doing, group members eliminate the assumption that others in the group share their views of matters that are utterly unknowable. And when folks are inside grief, it matters so much that no one make assumptions about their deceased beloveds.”

Some of those who benefitted from Susan’s bereavement groups write:

“Over a year ago our precious son took his life unexpectedly. Our world was shattered by this incomprehensible and unforeseen tragedy. Loss is universal, but loss to suicide is unique and often isolating. The emotions are complicated, confusing and sometimes unspeakable. With sensitivity and gentleness, Susan Cyr guides our mothers’ group as we explore these tortured emotions. She offers a safe and nonjudgmental place to gather as we all struggle with the loss of a treasured child and the tempest of yearning and longing that rock our transformed lives. It is a place where all pretense can melt away and where we are free to be authentic.There is no pressure for performance. We sometimes cry, sit quietly or attempt to articulate our grief knowing that words are truly inadequate. There are moments of laughter in the group, in the midst of sorrow as we draw strength from each other and the knowledge that we are not alone. There is a comforting bond that provides strength to continue this difficult journey. I am grateful to Susan for creating this refuge.”

Another mother writes: “After I lost my son to suicide 2 years ago I had instant, amazing support from family, friends, co-workers, and a therapist, but I needed something more. I needed to talk to someone that knew what I was going through and understood the thoughts and feelings that I carried inside after losing a child to suicide. I wanted to find a space that I could feel supported and understood by people that intimately knew what I was going through because they were going through it too. Susan offered that space. From the first moment I spoke to Susan on the phone, I felt an instant connection. Not only because of our shared grief of losing a child to suicide, but because she is warm, comforting, and caring. Because of Susan, I found that space that I could share my thoughts and feelings with others that truly understood. We all have our own views and feelings about this new path we are on, but in this group, with Susan at the helm, I have found that ‘something more’ that I was searching for. As one of the women in the group so eloquently stated, I found my tribe.”

Sometimes we don’t know what to say or do in the wake of someone we know who has lost a child in a traumatic way. 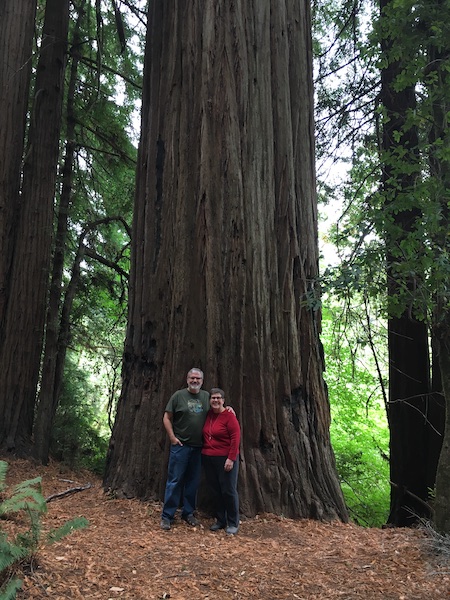 Susan and Craig Cyr enjoy visiting the California redwoods in the wake of their son’s death. Photo shared by Susan Cyr

“Often, the non-bereaved don’t know what to say or do to support a bereaved friend or relative, particularly if the loss was traumatic or stigmatized, like suicide, drug overdose or any child loss,” Susan says. “My suggestion is that quiet presence is more important than any words. Follow the lead of the bereaved person and just listen. Offer a hug and say nothing. Give them food in the early days and weeks. They do not need your comparative stories or your advice or your opinion about why their beloved died. Nothing could be more arrogant and hurtful than telling a bereaved parent that their loss is part of some bigger plan. Do not put your timeline on anyone else’s grief; some grief lasts a lifetime. I envision a world where grief and mortality are not shoved out of our consciousness. I envision a world in which we acknowledge our vulnerability and grow compassion instead of competitiveness and greed. And, acknowledging grief is one way to grow compassion.”