As a mother who believes in the power of Waldorf education, Marli Jenkins––along with a handful of parents, students, educators and community members––is working to create a Waldorf-inspired high school on south Whidbey Island. 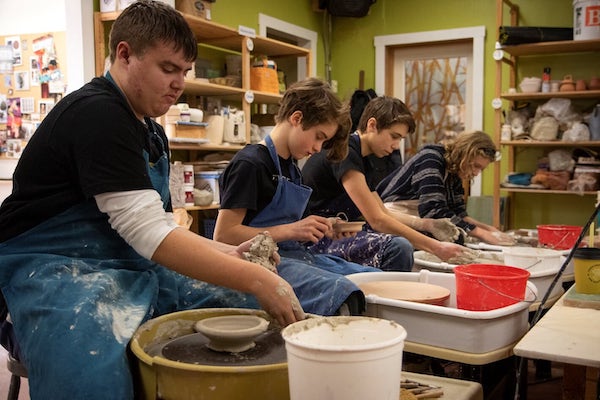 The Woodhaven High School Initiative was launched last September with seven students and eight teachers. Classes take place in a yurt at the Organic Farm School, in Langley, and a current class is making pottery at a studio in Freeland. 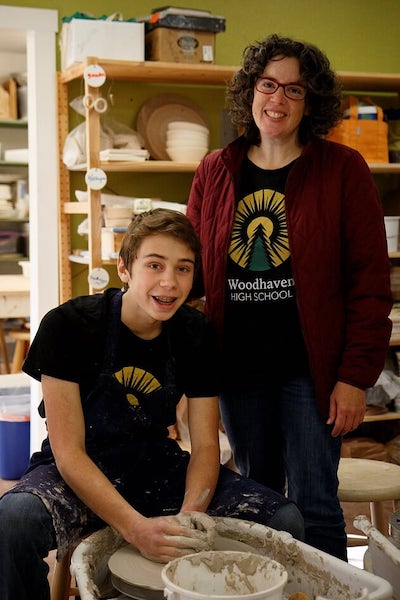 Marli Jenkins, right, and her son Kelvin at the Whidbey Clay Center. Marli is the administrator for the new Woodhaven High School.

Meeting this week at the Whidbey Clay Center in Freeland while students sat at pottery wheels making clay bowls, I sat out in the sun chatting with Marli Jenkins, the school’s administrator, and Kent Ratekin, the school’s faculty liaison and main lesson teacher.

As one of the pioneers who helped to start the school, Marli is keen to share her enthusiasm.

“We are blessed with a committed group of long-time community members and parents, working together in love and respect for one another,” Marli says. “We share a philosophy of education that promotes peace and an understanding of the whole human. Now more than ever, there is a deep need for an awareness of self as part of an interconnected community whole.”

Kent has a long history of teaching in public schools as well as starting and running numerous Waldorf schools in the past.

Marli has three children attending the Whidbey Island Waldorf School and two sons who have graduated from WIWS. Typically WIWS graduates attend either the local public high school, are home schooled, or commute to the Seattle Waldorf School. Last spring, Marli inquired about starting a Waldorf-inspired high school on Whidbey—talk of which had been ongoing for years.

Marli and her husband Jason, along with Amy Verellen-Grubbs and Cherub Zimmermann, took action in creating this initiative for a Waldorf-inspired high school on Whidbey Island.

“We’re tiny, but there’s something in this little seed that’s been talked about for a long while,” Marli says. “I’ve never been a teacher or had experience as an administrator, but I thought ‘why not now’?”

With more than a thousand schools in 60 countries worldwide, Waldorf-based education celebrates a hundred years of its whole-child-based approach to teaching and its influence continues to grow. Waldorf high schools comprise just 4 percent of the organization’s total schools. Now Woodhaven is a new seedling with hopes of thriving.

“I’ve started lots of things and there’s different ways things can start,” says Kent. “This started out of inspiration. That inspiration attracted one of the best faculties I’ve seen.”

While these names may not be known to the greater public, within the Waldorf and education communities, the faculty comprises seasoned and respected teachers.

“I am excited to be part of a project that promotes curiosity and is devoted to encouraging resilience and personal resources for these young people who are stepping out into a world which will be so different from anything we know,” Gretchen writes in an email. “The faculty and the students are remarkable, spirited, unusual, very diverse. The faculty meetings begin and end with us attuning to each other and our intentions by singing together and reading inspired writings. The school day begins and ends in a united contemplative moment.”

Detmar Straub, a retired Waldorf classroom teacher with 15 years’ experience, teaches science blocks for Woodhaven students. His friend Mark Wahl, who has tutored hundreds of South Island students, mentioned the program and Detmar offered to substitute when Mark needed him to fill in. Then when the school’s previous science teacher left, Detmar was asked to fill that post.

“I was asked to give it a try and it felt really good,” Detmar says in a phone call. “I’ve been teaching now probably four weeks. I am happy to be part of this initiative. I’m really impressed with the quality of my colleagues and I hope that we can continue to thrive. There’s a lot of enthusiasm. I really like the spirit that’s behind it–‘Let’s go for it and see how it works.'”

Kent, who recently helped set up Waldorf-inspired charter schools in Oregon, looks forward to his venture with Woodhaven. 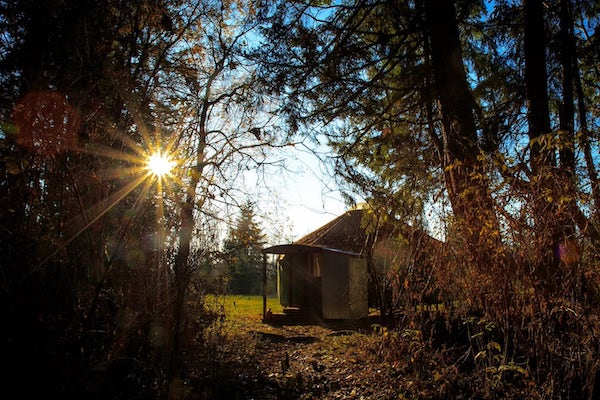 “Being flexible now is getting this off the ground, Kent adds. “We teach block classes. There is room in the curriculum for seasonal lessons and community apprenticeships. Our guiding principals are: community interaction, social justice, self actualization, project-based learning, practical application, apprenticeship/internship and community service work.”

“The connection with community is a huge part,” Marli adds. “Right now we have a small group of pioneers that have made some big sacrifices to bring this initiative to life. It’s amazing what we’ve done so far, but to make this truly sustainable, we need people willing to join us in building this up. The energy for this has been growing for decades and now is the time to make it happen!” 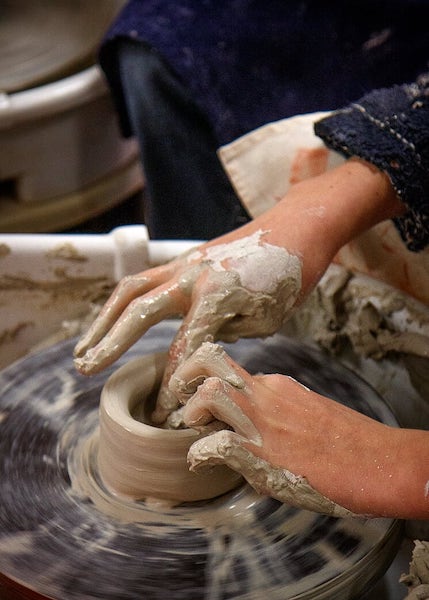