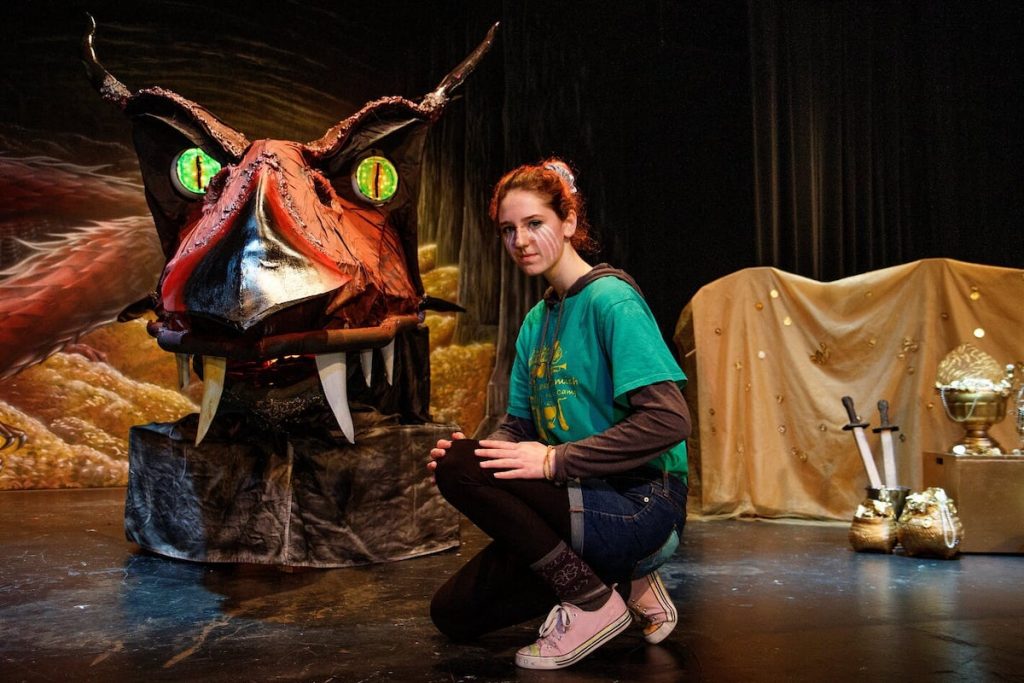 Macie Vande Werfhorst as Bilbo Baggins in Whidbey Children's Theatre's production of the Hobbit. At rehearsal time, she meets Smaug the dragon

It’s telling about the love for one’s production when Ann M. Johnson, executive director of Whidbey Children’s Theatre, sends an email with the words, “Thanks so much from here at Middle Earth.”

Locals can visit Middle Earth as it comes to life in WCT’s The Hobbit, running Friday, Nov. 15 through Saturday, Nov. 23.

When it comes to The Hobbit, J.R.R. Tolkien’s beloved children’s story, I can’t imagine a more well-told tale. It’s our family’s blueprint and has defined my life with my husband the past 45 years. We like to imagine ourselves as hobbits.

“I love that you all have a personal relationship to Tolkien’s story, and can feel some of the same bubbly passionate feelings about it that our WCT kiddos do,” Ann writes in an email. “They have been looking forward to telling this story to their audience, and our patrons will NOT be disappointed!”

“Every show is a unique journey; each cast and crew and production team – each script and story – provide the variables that make a production special,” says Cait. “Working with THIS cast and youth crew in The Hobbit has been, understandably, rather quest-like and epic in its scope! With a cast of 33 and about 10 youth crew, plus two youth techies, my team and I have had a fabulous time working with the diverse mix of students – many of them new to theatre, some of them new to WCT, and all of them new to this particular alchemical mix. Audience see the performance on the night, but don’t get to see all the time and energy and personality and strength and growth that goes into each youth participant’s efforts – whether cast or crew.
“One of the things I love best about directing is getting to see kids journey from the ‘this is how I was cast’ moment to ‘this is who I am in this ensemble’ moment. We focus heavily on ensemble here – no part is more important than any other, for without each and every participant we could not put on THIS story; and there is growth and development opportunities in all roles, on or off stage. We set a pretty high bar for participants; about 95 rehearsal hours during which time we get to know each other and develop our theatre family, practice theatre skills, and work our characters and scenes. I’ve watched countless kiddos travel from the ‘oh my goodness, I can’t possibly do this!’ through ‘Oh, I think I can do this!’ to ‘I CAN do this!’ and there is nothing quite like it. Today’s world is hard to navigate and understand, let alone figure out how best we fit into it; giving kids some sense of how to tackle daunting challenges and rise above – to see themselves as CAN DOers, rather than CAN’T DOers is huge.
“I’m super proud of this cast and crew – The Hobbit is epic in story and history as well as the pragmatics of lines and scenes. It’s a very mature and skilled script, and this multi-age cast  and crew worked very hard to bring it to life. They are heroes, all.”

As in Cait’s role of director, the set and costume designs, building Smaug the dragon was a labor of love. Smaug, created by Robert McElhinny and his ‘Team Smaug,’ will make his debut this week. The team spent more than 300 hours in creating and fabricating the dragon, who appears lifelike when his eyes are lit and he moves his head.

Arcani Robinson and his mom Kristina also helped in creating the dragon.

“We went to Robert’s house and worked on teeth, horns, and eyes,” Arcani wrote in a text. “We made the teeth and horns out of rubber mats. We warmed it with a super hot hair dryer, cut the teeth out, and used a hot glue gun to put it together. The eyes were made from large ornaments. Robert cut them in half and put lights in them. We glued the eye covering onto the ornaments. It made me feel exited to work on Smaug.”

When Smaug arrived at WCT Wednesday night, the entire Hobbit cast welcomed him with: “OMG,” and applause.

Molly Mills, who worked on designing and building Smaug with mentor Robert McElhinny, says,”I’ve learned so much from Robert. It is so much fun.”

Molly adds that she’s been involved with WCT since she was in fifth grade. Now a high school junior, she’s enrolled in Running Start and majoring in Psychology. In addition to spending hours working on building the dragon, Molly will also work as a lighting tech with Rod Stewart, WCT’s technical director.

At Smaug’s arrival through the theater’s back door, Director Cait said to the actors, “I’d like to introduce you to some people who spent hours creating this character, a HUGE engineering job! The master creator is Robert, who got a lot of help from Molly and Kareena, who designed and shaped the head. This is the biggest and most awe-inspiring thing we’ve had yet.”

Robert added, “Molly and Kareena gave it good bones. They worked with polycarbonates and foam. They did a fabulous job!”

Molly and Kareena turned on Smaug’s backlit green eyes and moved his head up and down. This week he was painted and made ready for his two-week run guarding his hoards of treasure.

With all the effort and attention to detail that has gone into making this classic tale come alive for the audience, we may believe in heroes once again.