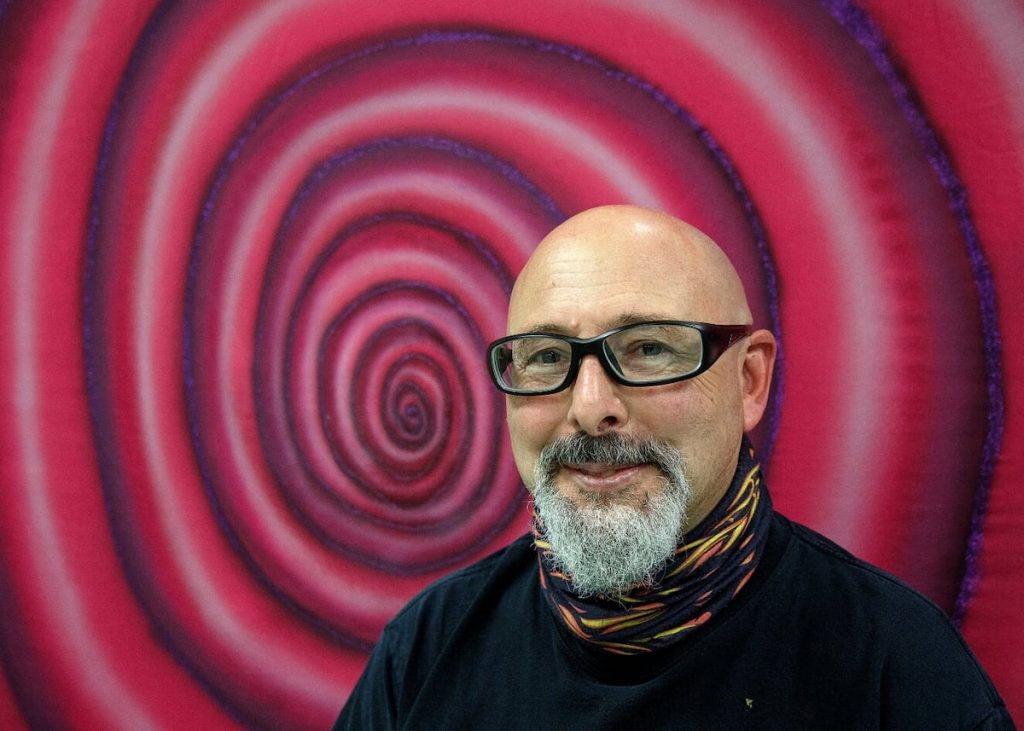 While driving into Langley at twilight, visitors may see a giant pink snail looking out the window of Whidbey Children’s Theatre. Bumper stickers claim Langley is magic, and the spirited figure adds to our ‘Village by the Sea” mystique.

The snail’s last acting role was as Jean-Claude the sea snail in WCT’s production of Dr. Dolittle last summer, where its shell opened to ‘transport’ actors on a magical sea.

“Robert said he’d like to help and he built the moon for Shrek,” says Ann Johnson, WCT’s Executive Director, recalling Robert’s work for the production, which ran in summer, 2018. “He knows a lot about theater and keeping our actors safe. Robert has done a major thing here. He’s got an engineering mind. He spends a lot of hours teaching. I’ve helped in building (some of the characters, including Smaug the dragon for the upcoming production of The Hobbit) and each time I learn a new skill, like airbrushing. I directed Dr. Dolittle last summer. With Jean-Claude, Robert designed the structure and articulated his neck to have him look at people. He looks out the window now. During the play, we built a snail parking garage in the hallway. Crew carefully opened the doors. He rolled in. Jean-Claude’s voice sounded like a flugelhorn. He became one of the actors.”

“I designed Jean-Claude on my own, and did not let Ann or Cait (WCT’s Production Manager), ‘Theatre Godesses,’  as I refer to them as, even see its construction,” Robert writes in an email. Only once it was at the theater did they see the snail get its glitter and lights. But I had lots of help with the sewing of ten yards of pink Spandex for the neck, eye stalks and little feelers from Katie Stewart–Rod Stewart’s wife. Rod is the Tech Director for WCT. My wife Teresa helped hold things in place that a clamp couldn’t, and a couple named Tracy and Christoff made a lighted slime trail which is hiding under Jean-Claude’s tail.”

Robert worked for national phone companies as a cable splicer and later as a teacher of the profession until a freeway motorcycle accident on his way home from work took his left arm above the elbow in 2015. Intubation with a breathing tube following the accident damaged his vocal cords and he now speaks via a device hidden beneath various scarves wrapped around his neck.

With the help of doctors, medical professionals, and especially, from his creative wife Teresa, a playwright, director, actor and novelist, Robert recovered. Set design was his therapy. He points to whimsical fish, hanging from the ceiling in his home, he fashioned in 2017 for Teresa’s one-act play, which she wrote and directed: Schools of Thought, adapted from a newspaper column Jim Freeman wrote for Whidbey Weekly.

In good humor these days, Robert calls his left arm ‘Stubby,’ and might employ it to hold a roll of masking tape. His eye for detail and design, his enthusiasm for the crew of students he works with, and his excitement about his projects is catching.

But Robert prefers shining the light on others. For the upcoming WCT production of The Hobbit, running Nov. 15-23, Robert worked with students on creating Smaug the dragon. While the dragon’s time on stage is short, the dedication and many hours worked behind the scenes make the journey of Smaug’s creation all the more appreciated.

Students Molly Mills and Kareena DeClerq collaborated on the shape of the dragon’s head, beginning with a chalked design on the McElhinny’s concrete garage floor. Robert taught them welding techniques. Other students, including 10-year-old Arcani, and his mom Kristina  Robinson learned other skills as well. Robert’s list of what was done: shape PVC pipe with a large propane torch as well as a heat gun; cut and shape Polycarbonate sheeting with a large propane torch or heat gun; weld steel plates and rebar; use steel cutting and grinding tools; cut, sand and bend EVA foam mats to make horns, teeth, and egg tooth–skills they could use later to make their own Cosplay costumes; use of ‘Great Stuff’ foam to add detail around horns.Tools they used included a drill press, table saw, cord and cordless drill and drivers. Students learned which safety gear to wear with which process.

“There is a troop of parent volunteers that come in when they are needed to help paint, glue, construct set pieces, and do whatever is needed,” Robert adds. So glad to have their support. Volunteering for WCT works double-fold; It helps get grant dollars for volunteer hours worked!

“Hopefully the whole point of your article will be focusing on the young people learning how to do new things,” Robert wrote in a recent text. Ann (Johnson) and Cate’s (Cassée, director of the Hobbit and WCT’s production manager) working with the kids. The other volunteers. That makes magic happen on stage. And the kids learning to cooperate with younger and older kids, plus adults.”

The result from Robert’s efforts and Team Smaug is a dragon who has star qualities, and a play with dedicated actors and detailed exquisite backdrops painted by artist Tom Giffin.

“I spent around 225 hours creating Smaug,” Robert writes in a text. The girls put in 25 to 35 hours each. They took Smaug for a test run. He did well. The girls were impressed. We’re still not done, because we have to paint him at the theater. He won’t be completely painted till Thursday the 14th for dress rehearsal. The 15th is opening night. Molly is running lights for the show, Arcani has two or three small parts.”

Whidbey Children’s Theatre was founded by Martha Murphy nearly 40 years ago. She inspired generations of local kids to act and become involved in stage craft and theater.

Ann Johnson said she was first involved with WCT six years ago when her youngest was six and wanted to be involved in theater. Ann, an educator with the South Whidbey School district at the time, found her happy place at WCT.

“I’ve been involved ever since,” she says. “It started with Martha Murphy 38 years ago. Since then we’ve created a non-profit. I’m so pleased to be a steward for these kiddos and have the audience witness their hard work. We end up with a charming, smooth-running show. As the arts are being marginalized in schools, this is so important. Plus we have an arts-rich community here. Adults and kids here are passionate and put in the hard hours.”

During annual WCT fundraisers, donors are asked to choose which plays they would like to see performed in the future. The Hobbit was among the titles chosen two years ago. Cait Cassée, WCT’s production manager, directs this season’s two-act play with 34 actors. Rod Stewart is the theater’s technical director.

“This fall we wanted a season of heroes,” Ann adds. “Bilbo sets the stage for the season.”

And speaking of heroes…

“It is worth noting that Cait, too, was a long time volunteer, former board member and administrator with WCT during WCT’s crucial transition time coming out of Martha’s care and into our non-profit status, and into our move from the Porter building in downtown Langley to our current location on the South Whidbey Community Center campus,” Ann shares in an email. “She and so many others–board members, volunteers and families–helped keep WCT flexible and functioning during those periods of transition and change, and here we are now in our 38th season of heroes!”

And what of the beasties Robert and his team make? “We need a Robert McElhinny wing,” Ann says.

Stay tuned for a story next week, revealing photos of Smaug the dragon, his creators, and his debut at Whidbey Children’s Theatre. And when you are immersed in watching the play unfold, keep in mind the people who made it a thing to remember.