Halloween, Day of the Dead and All Soul’s Eve–Langley style 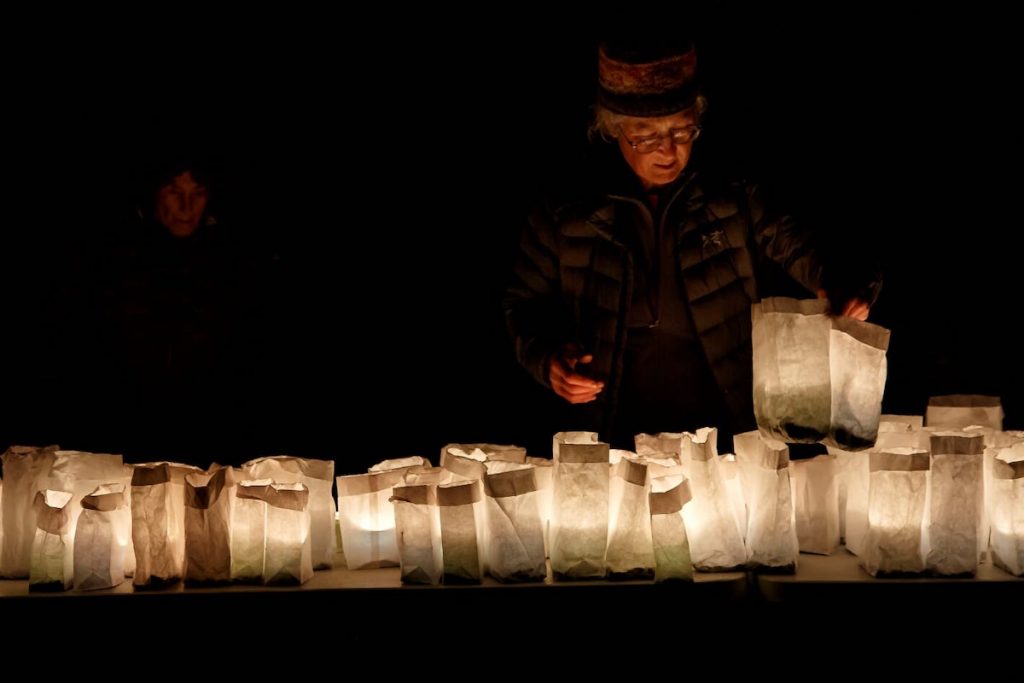 Cary Peterson, in the front, greets visitors to the All Soul's Eve event at the Langley Woodmen Cemetery. Cary's mom Meg Peterson is in the background

Langley goes all out when celebrating Halloween, Dia de Los Muertos, and All Soul’s Eve each year. One way is a full-on shake your Zombie groove thang at a Halloween kickoff ball and on Halloween in downtown. Another is remembering those who have passed with Dia de Los Muertos altars. And there is a visit to the cemetery at evening time November 1.

Langley Main Street Association hosted this year’s Spooktacular, which included costumed rockers playing on the rooftop of Anthes Ferments, a witches’ flashmob, and a Thriller zombie popup dance. Local businesses with the moon and crow sign in the windows invited trick or treaters in for candy. By early Thursday afternoon, Second Street in Langley was filled with zombies, goblins, fairies, witches, and more. Afterward kids descended on the neighborhood off of Al Anderson Road to collect goodies from the neighboring houses. The Island Church of Whidbey hosted its 28th annual Harvest Carnival, providing games and treats.

“Daunne Zinger (also an Island Bohemian) from Island Dance has organized the flash mob for a number of years,” Brian wrote in a Facebook personal message. “She couldn’t this year due to her participation in a play. She asked Sue to take over for her, and I offered to handle the promotion and communication with interested dancers. I just created event postings and asked interested people to private message me to be added to a list about practices and performances. This is the second year Island Bohemians has taken part in this and we plan to make it an annual part of the Spooktacular. We will have monthly practices throughout the year to help learn and remember the complex choreography. We would like to greatly expand the number of flash mob participants. Interested parties can email me.“

Last weekend the Black Cat Ball, hosted by Carie Elder and Bayview Community Hall, brought out the community’s love of dressing up to reveal its zombie side.

Artist/astrologer Gretchen Lawlor has traveled and lived in Mexico and visited South America. Their community’s celebration of Dia de Los Muertos —which runs from October 31 to November 2 —wove itself into her deepest fibers. Back living in Langley now, she shares her love of this beloved holiday by teaching the craft. This year she taught classes in making the colorful paper maché Alebrijes or spirit animals that accompany those that have passed on in their journey back to visit their living families. Students at Create Space in Langley and the new Waldorf-inspired Woodhaven High School created their own Alebrijes, which Gretchen displayed in her home window.

Gretchen turned her living room into a setting of altars and lights. This year, especially, she remembers her sweet dog, Zephyr, who died in May. Zephyr is photographed earlier this year in the above link. Click on Gretchen’s name and you’ll see him.

Speaking of those who died, a soulful poignant event takes place each November 1.

I helped Cary Peterson and friends prepare for All Soul’s Eve at the Langley Woodmen Cemetery. We folded the edge of a couple hundred white paper bags for luminarias and chatted in the cold evening at Cary’s home Wednesday night. Friday afternoon we placed the sand-filled bags with votive candles to outline and light the roads within the cemetery. With the crescent moon, passing clouds, and calm weather, visitors collected their own luminarias from Cary, her mom Meg and Anne Zontine, who had set up a table at the cemetery entrance to greet the evening’s many visitors. Walking along the light-filled path with others’ faces lit by the luminarias gives one a chance to contemplate those who have passed on and their continued love for us. The Whidbey Island Threshold Singers opened the evening with soulful songs.

Being a part of this ritual made the experience deeply felt as I walked with my husband Bill and we added a luminaria to Shant Garibyan’s grave. He and his brother Archie used to run the popular Cafe Langley, which closed in December 2016. Shant’s wife Carrie moved to the Midwest and we told her we’d visit him regularly to keep the evergreen needles away. Shant enjoyed a number of visitors last night.

Asked to tell me about its backstory, Cary emailed: “All Soul’s Eve started in 1996 through the inspiration of Cary Peterson and Lucinda Herring. The cemetery had been put up for sale in 1995, and Cary was a founding member of the Friends of the Langley Woodmen Cemetery, a non-profit that was started to help the city maintain the cemetery and keep it as a special place for the community. As part of a festival celebration group, on All Soul’s Day, Lucinda had been coming to the cemetery with children to sweep the graves and put out luminaries. Together they created All Soul’s Eve, held yearly on Nov. 1st, from 5:30 – 8 pm, as a community celebration of remembrance. Luminaries line the road and visitors receive luminaries that they can place on graves, or in an area for loved ones not buried in the cemetery. As the evening progresses, the cemetery fills with light.”

All in all, a thrilling and finally, poignant week. Toast and remember those who have passed on and love you still.