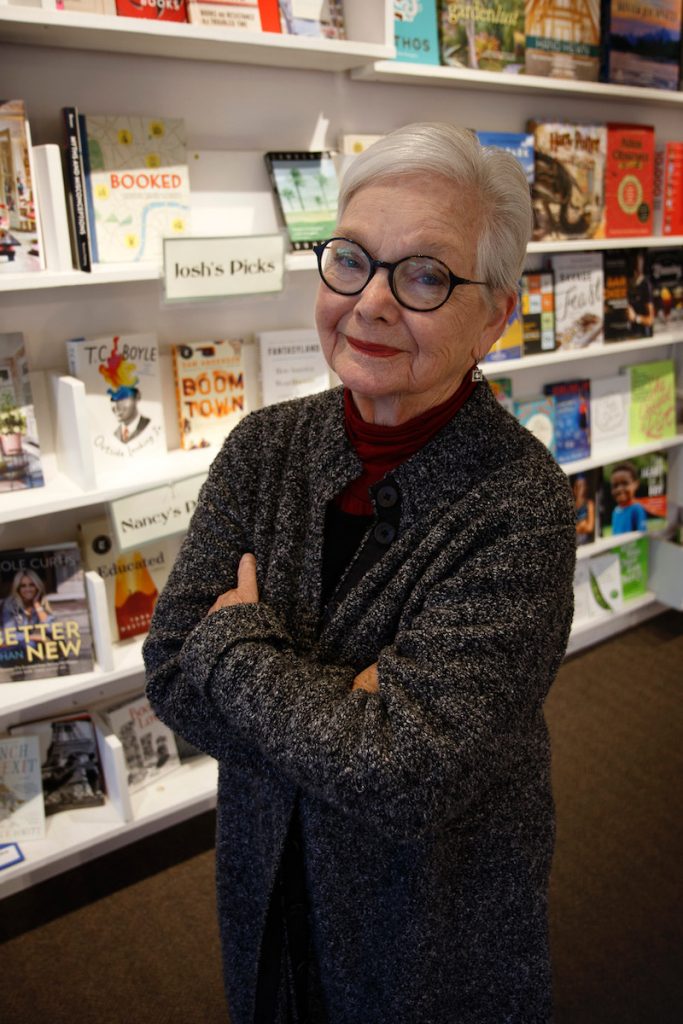 Moonraker Books in Langley is a touchstone when one needs real conversation, to buy books, or when looking for a gift with meaning.

At its heart is Josh Hauser, Moonraker’s gracious and razor-sharp-witted owner, who dances to the store’s tango music of the moment while chatting about people we know in common. Sometimes she’ll wistfully recollect travels with her handsome, much-loved husband Glenn, who ran the store with her until he died eleven years ago. Their son Barry, who was raised in the bookstore since his middle school years when Josh and Glenn bought the building in 1972 has returned to Langley from his life beyond the island and has worked at the bookstore the past six years. His older sister Kateen lives in Woodinville.

“I only saw your dad get angry twice,” Josh says to Barry. “He was one of the kindest men I ever knew. I would have followed him anywhere. I thought we would see the world. We wound up staying here.”

Jamie Whitaker, recently retired from where she was much loved at the Langley Library, moved to Whidbey in 1986. She recalls Glenn: “I remember Glenn! He was kind of like one of those David Niven-type men. Dapper and gentlemanly. I didn’t know him well, but whenever I encountered him he was swell.”

On a misty autumn Monday morning, a couple walks in at 10:30 when the store opens. Josh calls out in greeting, “What’s up, Buttercup,” to a woman she knows.

“This is my favorite place in Langley,” says Carol Ryan, a 20 years-long patron of Moonraker’s. Josh says the feeling is mutual.

Moonraker Books sells stories by published authors. And then there’s the stories that people chat about while browsing the shelves. The City of Langley government. The recent flooding of the Whidbey Art Gallery. Recalling Glenn’s life in the Marines, flying a Cessna O-1 Bird Dog in Korea and Beirut.

As many who find their home on Whidbey Island, Josh’s story is one of discovery following a search for the place that clicked.

“We were living in Southern California and wanted to move after Glenn retired,” Josh says. “We had owned two planes and were smart enough not to buy another. We drove up the coast camping along the way. Camped at South Whidbey State Park. We visited Hood Canal. We fell in love with this area and wound up focusing on Whidbey. I went to twenty schools and didn’t know you could stay in one place.”

Josh says her birth family traveled often due to her father’s career. Her dad was a chemist with patents in cement production. From a ‘butt-ugly’ place in Oklahoma to Mexico to Southern California, Josh moved with her parents and brother, recalling a trip she once took with her brother from Durango, Colorado to Mazatlan, which took seven hours and three tires. While living in Cuernavaca, Mexico, Josh recalls dirt streets requiring a morning water to keep the dust down and her parents paying their utility bills at Cortez’s palace. The constant then in Josh’s peripatetic life was books.

“I was alone a great deal of time growing up,” she says. “My family moved few possessions, but always books. Wherever those books were was my home.”

It was natural then that Josh would find herself owning a bookstore in a small seaside island village.

“Glenn asked what I could do, and I said I can read,” Josh says. “My mother had given me a sewing machine—and I’m not that sort of person—but when we moved here I didn’t know a soul. The kids were in school, so I took sewing lessons across the street. Saw a sign for sale of a building across the street. It had been a St. Vincent DePaul thrift store. What a karmic thing throwing Saint Vinnie in the street! Upstairs the room was papered with news of the sinking of the Titanic. We could only stand upstairs in the middle. My husband and local stalwarts we hired cleaned the place up and remodeled it.”

Glenn and Josh opened Moonraker Books on June 16, 1972—“Just before the hippies moved here,”—Josh recalls of the back-to-nature folks that moved to Whidbey in the 1970s.

Glenn opened a liquor store next door, which later became Roberta’s women’s clothing and is now the Flying Bear Farm & Design floral shop. Josh found and took helpful advice from Kay at Kay’s Book Mart, then in University Village, who advised her on running the book business: “She told me, ‘If you don’t try it, you’ll never know if it works.’ Kay told us where to buy books. We bought books until we ran out of money. I borrowed money from my father.”

Locals took bets that the store wouldn’t make it past September. —“There were a ton of closures then,” Josh says. But over the years, even with Amazon, Moonraker Books endures.

“We survive because people are good and want to have a bookstore,” Josh says simply. Speaking of good people, Josh’s long-time friend Nancy Welles is a regular working behind the counter. Nancy was pregnant with her son Nick Welles (who works at Useless Bay Coffee) when the two women first met some forty years ago, and became life-long friends. Josh recalls with gratitude Nancy’s running the bookstore two weeks before Christmas once —a crazy busy time—when Josh had to leave for a death in the family.

Now in her ninth decade, “84 is 84 is 84,” Josh says when asked her age, and notes that she was carded for drinking well into her thirties. She’s still sparkling and full of stories and charm.

What are her favorite books?

“That’s like asking who is your favorite child,” Josh shoots back. “I tend to like World War I fiction. It is the war that changed the world. It was where the women suffragettes started. Women had to do the jobs. Charles Todd is particularly interesting, it’s a mother and son writing team, which is unusual. People don’t know it was written by a couple.”

Another woman and her husband walk in. They talk about St. Hubert’s book club. The woman compliments Josh on her beautiful earrings, saying they’re elegant. When the woman wanders the shelves labeled Josh’s Picks, Northwest Gardening, Food, Local Authors, Design and Decor, New Fiction, Best Sellers and Young Adult, the woman’s husband walks up to Josh with a book in his hand. “This is a gift for my wife,” he whispers. “Can you hold it for me until I come back later to pay for it?” Josh nods and puts the book behind the counter. Another day at this portal of imagination and possibility.

Visit Moonraker Books in Langley. It’s a place to be or one to find your new self. Their email is: moonrkr@whidbey.com