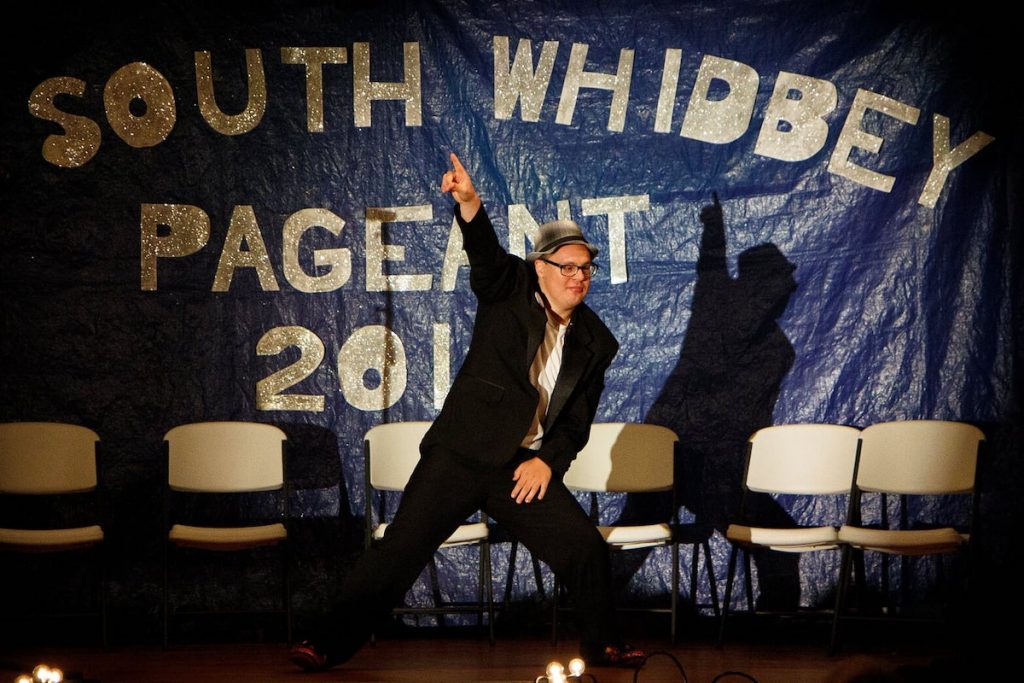 Lucas Etzell --this year's Mr. South Whidbey--gets the party started by dancing to 'Celebration' by Kool & the Gang

Lucas Etzell, just 22 in April, strolls in to Pickles Deli as comfortable in his skin as anyone I know. He calls out to Finley Thomas, one of his co-workers, joshing that Finley looks like a court jester in his green and black-diamond-patterned shirt. Lucas is wearing a black and white felt crown decorated in colored ‘gems’ and matching Mr. South Whidbey banner, along with a flowing faux fur-trimmed red velvet cloak. The costume on Lucas reflects his inner king as he sits at the table with his mom Kristi Etzell. Lucas is a triple crown winner, his mom says. Lucas nicknamed our chat a ‘King-terview.’

Lucas was crowned Mr. South Whidbey October 5 at the 14th annual pageant where men perform in a talent contest culminating a season of raising funds for Friends of Friends, a South Whidbey nonprofit which raises money to help locals pay for their medical and dental care. His other crowns: homecoming king and prom prince at Coupeville High School.

Mr. South Whidbey’s winner earns the most votes. The community votes— one vote for one dollar. Lucas’ campaign, launched with the help of family and many friends, earned him the most votes. Pickles Deli, where Lucas works three or more days a week, put a big jar on the counter to promote his campaign. Popular pastor Jim Lindus of Trinity Lutheran Church (TLC) in Freeland, made an exception to talking politics at the pulpit and urged the congregation to vote for his friend.

“I have known Lucas for almost his entire life,” Pastor Jim texts. “We call him Pastor Lucas at TLC because he is an ambassador for good. He shares smiles, hugs and good will with all. We are all very proud of Mr. South Whidbey Lucas Etzell.”

“Pastor Jim came to my event,” Lucas, says, patting his robe royally. “He gave me first the hug after I won.”

Kristi Price, vice-president of the Friends of Friends board, and chair of Mr. South Whidbey, said a total of $27,000 was raised this year.

“Lucas is so social,” she says. “What we do is a labor of love. Friends of Friends is so basic. We help babies to seniors. We’re inclusive in who we help. We keep our operating costs minimal. We use the same blue vinyl banner every year.”

The back story for Mr. South Whidbey as noted on Facebook and its webpage: “Friends of Friends has been helping people on South Whidbey Island since 1997. This grass-roots organization started with a personal letter to 75 friends of founder, Lynn Willeford, asking each for a $100 donation–$7,500 and 11 grateful recipients later, Friends of Friends was on its way. In its first ten years, the organization helped about one thousand people with a little less than $400,000 in medical expenses. Now celebrating its 22nd year, FoF has distributed over a million dollars in donations, all raised from within the generous South Whidbey community, to help over 2000 of our neighbors with medical expenses.”

Lucas was invited to campaign as Mr. South Whidbey following a fund-raising dance he organized to raise money for victims in the 2018 California wildfires. Curating the music and inviting family and friends—“I’m a good dancer,” Lucas says,— to the Greenbank Progressive Club, the community noticed his gift for bringing people together. The event raised about $400. A neighbor with ties to Friends of Friends suggested that Lucas run for Mr. South Whidbey in 2019.

“Lucas has a natural ability to raise funds by being fun, so Friends of Friends was delighted when he accepted the nomination,” she texts.

To promote his campaign, there was a kickoff event, with the help of brother Ben: ‘Boogie Down’ on Father’s Day, in which a few Shifty Sailors showed up to surprise and sing with Lucas. There was his marching in the Maxwelton July 4th parade; singing onstage with the Shifty Sailors at the Whidbey Island Fair; setting up a Friends of Friends donation table during the coffee hour following Sunday services at Trinity Lutheran; marching with ‘Fans of Luke’ at the Whidbey Island Fair parade; and ‘Luke’s Luau Dance’ at the Greenbank Progressive Club last month.

Lucas gave out buttons featuring him wearing a Men in Black style suit and looking cool in sunglasses. Lucas is cool these days with his goatee, grooving to tunes in his head, joking with the many folks passing by he knows. The Etzell family, friends and church all joined in to promote his successful campaign that culminated in the Mr. South Whidbey pageant.

“I was the first up,” Lucas says. “I dressed up with a suit. I danced to Celebration, by Kool & the Gang.”

“That was his walk on and set the tone for the night,” Kristi, Lucas’ mom adds. “Lucas got the party started. That was the fashion show part. Then there was the interview segment. Lucas was asked, ‘If you held a concert here at Freeland Hall, what famous musicians or bands would you hire to perform?’“

For his talent competition, Lucas adds, “The emcee said four words. ‘Beat It.’ Michael Jackson.”  Kristi posted a video of Lucas getting down on her Facebook page.

Kristi said Lucas’ button-making machine and his costumes were bought at our local thrift stores, a reflection of our community and how many of us find treasures at our thrift stores.

A long-time patron of Sno-Isle libraries—where he honed his talent for music and film curation—, and now a volunteer at Freeland Library, Lucas said his biggest wish is to work as a page at the Freeland Library.