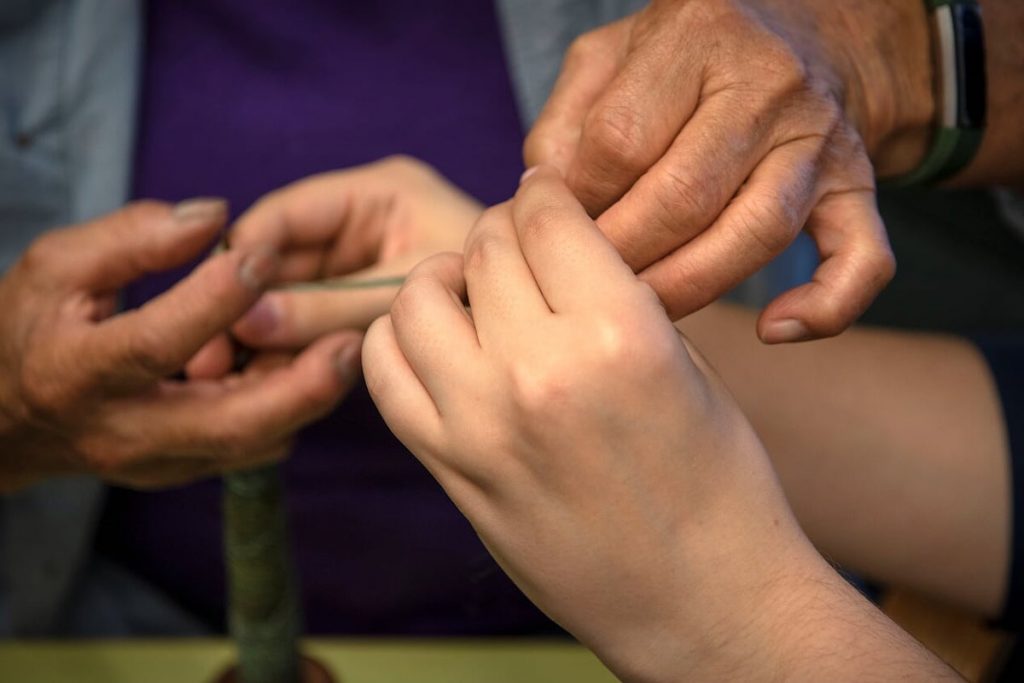 At Abundant Earth Fiber in Clinton, one teaches how to hold fleece for spinning into yarn.

Coastal Salish people who once lived here named our island Tschakolecy, or land of abundance.

These days Whidbey Island is abundant in fiber artists, along with the alpacas and sheep who grow their wool from sun and grass. Abundant Earth Fiber in Clinton, a small batch spinning mill, retail shop and fiber lab, is a haven for creatives.

Lydia and Alan Christiansen, a teacher and a software programmer, built their cottage business five years ago. They chose to do something they love with the people they love, be satisfied by doing simpler things, and work hard to include their family of four boys.

Hard work includes buying and refurbishing industrial mill equipment (with no Youtube videos to show them how) to clean, card and spin raw wool. Last month the couple opened their WA-525 storefront to share what they’ve learned along the way and make the “path more abundant for the next generation,” as Lydia says in the first episode of her Modern Wool Podcast.

It all started with a spinning wheel Alan gave her after they were married. “It’s uncomfortable to be bad at something in the beginning,” she says in her podcast. “But I learned from my mistakes. Once I figured out the basics of hand spinning, my curiosity exploded. How does it go from the animal to the wheel?” Lydia began driving around the island with her baby son looking for sheep, asking people where wool was. She discovered that most of what was being shorn was sitting unused in barns. Who wanted the wool? What do do with it? Lydia’s curiosity sparked the idea of spinning the raw material into yarn, which led to the family business of creating a small batch fiber mill and lab.

Pink-cheeked, with lively intelligent eyes and the calm voice of a natural teacher, Lydia recalls her days teaching in California. “Twelve years ago I was single and had reached a wanderlust phase,” she says. “The housing bubble had popped. I could see a dead end. I was low. I didn’t know where my HOME was. I quit my job. I had this craving for life. I drove north until I hit the (Canadian) border. Found an apartment in Bellingham. I interviewed for teaching jobs. Magically I applied for a job on Whidbey for Grade 5. Such a nail biter! I drove into Langley. I saw the water. I cried and drove. And thought you can live like this? Whidbey Island offers this healing? I gave a terrible interview, I thought. Yet everything lined up. I was hired on a one-year contract. I wondered if this was home. I made up mind. I wanted to stay. The next day I met my husband Alan. That’s Whidbey! We met in January and married in April.”

Alan brought two sons into the marriage and an additional two more later with Lydia. As she mentions earlier, the spinning wheel started her mind spinning on the possibilities she could do with fiber that led the family to where it is today.

“I picked up hand-spinning as my sanctuary,” Lydia adds, recalling the days of being an at-home mom with young children. “Yet I had no background in it. As I figured it out through the process of learning a whole part of me woke up. I didn’t grow up with a family who encouraged me, no matriarchal lineage. I taught myself. I needed to do it my way. How to find raw wool, clean and card it. We bought a loom. It called to me. The first day I sat down to use it I felt a connection with the grandmothers, mothers—something—a gate opened that connected me with this large group of people. Since then so many looms come to me. These beautiful looms. We have to pay it forward to the network, primarily of women, that is so alive.”

This is Whidbey’s behind-the-scenes wizard Petra Martin recalls a similar feeling when sitting at a spinning wheel, this feeling of connection to generations before. When Petra mentioned this to me last week, I felt goosebumps of truth rise up.

Alan Christiansen says his domain is the small batch mill  of rescued machines which process the wool into yarn. A carding machine, a pin drafter, spin frames. The old machines, some from the 1950s, are art in themselves. He said 75 percent of the product is spun into yarn for knitting; the other 25 percent produces roving for needle felting.

When it comes to making persnickety fibers behave well with the various old spinning machines, Alan says his knack for fixing things evolved from growing up on farms. He moved to the island 20 years ago and got a job troubleshooting in software development. After meeting Lydia and starting a new family, he embraced her vision of all things fiber.

“Lydia’s interest…we realized this knowledge is going away with small mills like this closing right to left and going overseas,” Alan says. “This is important. We both value education.”

Does his life have more meaning nowadays?

“Absolutely,” Alan says. “When I was in software development I got up super early to catch the ferry, gave the best part of my day to somebody else. What this has allowed me to do is use my energies for something important to me. Never worked so hard. But it’s worth it.  Until this I had no idea what went into making yarn and the clothing we wear.”

Take a look at what you’re wearing. A natural fabric begins with the sun. If it’s wool it’s sun and grass to fleece to yarn to fabric. Abundant Earth Fiber helps us appreciate the cycle.