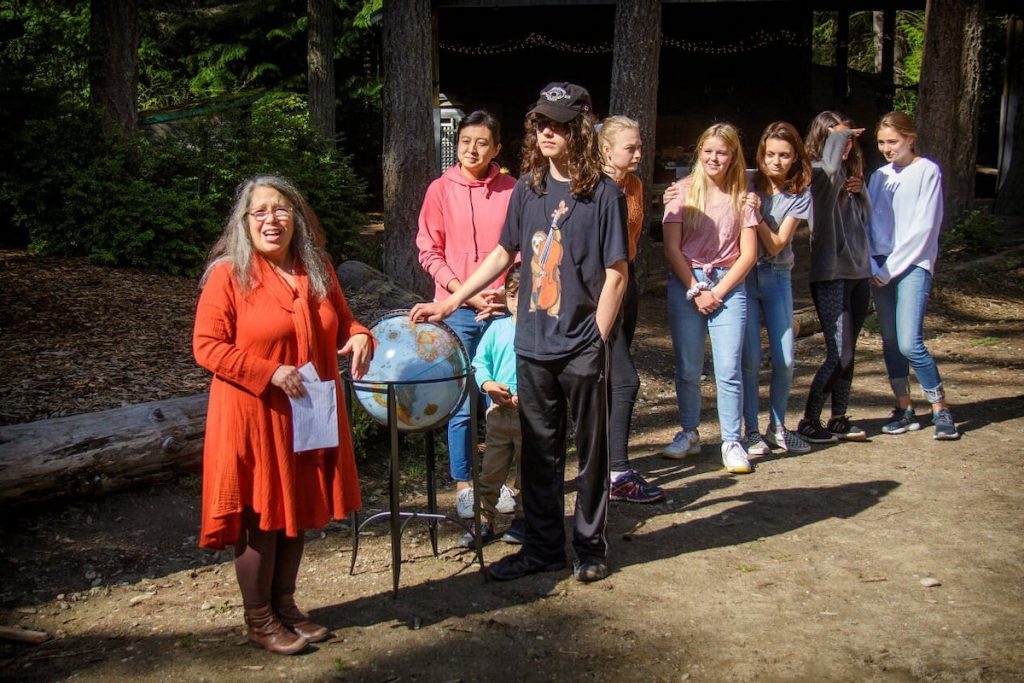 Anne Zontine cut an apple in half, revealing the star shape inside. “We have the universe inside an apple and in us,” she says. “We give thanks and are grateful for the parents, students, teachers who have come before, the seeds that were planted. Indeed, they have made all this possible, for here we are together, now.”

Anne represents a generation of women connected to nature, curiosity, belief in their power of creation, and the endurance of friendship. She and her friends imagined the Whidbey Island Waldorf School into being thirty-four years ago. Anne spoke last week at a birthday party celebrating the hundredth birthday of Waldorf education and the evolution of a little school in the woods.

“Many years ago when your mothers and fathers were young, my children, and the children who lived here would play at the beach, running, climbing, walking in the forest, exploring the world, building forts, picking berries,” Anne says, recalling the roots of WIWS and its connection to Waldorf education. “We came to know the island as a special place to raise our precious children. We planted seeds, some of these are already mighty trees. Some of the seeds were ideas, wishes, hopes.”

WIWS began in the backroom of what is now Island Senior Resources. Then Anne worked as a kindergarten assistant. More than three decades later, Anne recalls those days with some of the same women at a 70th birthday party last night for a dear friend who said Anne was the first person she met when landing on Whidbey Island in the 1980s. The long-time friends spoke of memories of babies delivered at home, of running the fledgling school, while an unspoken current of trust and love flowed through the room.

The Whidbey Island Waldorf School in Clinton grew from the seeds of love and trust once planted by this band of women who wanted their children to grow up to be independent thinkers. The first Waldorf school was created by an early twentieth century deep thinker who looked for solutions toward creating a better world in post-WWI Germany.

Rudolf Steiner, a scholar who invented new ways to practice medicine, earn money and educate children, was hired to provide a school for employees of the Waldorf-Astoria cigarette factory in Stuttgart, Germany. A century later there are more than 1,100 Waldorf schools in 80 countries. To get a sense of Waldorf education today stream Learn to Change the World.

Steiner’s emphasis on educating holistically appealed to the early founders of WIWS. At the birthday celebration, long-time teacher Angela Lindstrom said, “I now have two grandchildren. Six of my children graduated from this school. My greatest surprise as a teacher was getting to know the amazing people here. Something magical is created. We get to love each other. Learn about others; we learn they’re like us.”

Lori Barian, the school’s down-to-earth administrator the past three years, invited those gathered to join students who sang a blessing with their music teacher Franny Kenny: “The sun is in my heart. It warms me with its power and wakens life and love in bird and beast and flower. The stars above my head are shining in my mind as spirits of the world that in my thoughts I find. The earth whereon I tred lets not my feet go through, but strongly doth uphold the weight of deeds I do. Then must I thankful be that we on earth do dwell to know and love the world and treat all creatures well.”

At the close of the celebration Karina Bergen, enrollment and outreach director, displayed a young baby sequoia tree that would be planted, perhaps to grow into a mighty tree.

A new generation of women decided  to form a Waldorf education high school. Marli Jenkins, a WIWS mom of five children, spearheaded the Woodhaven High initiative this year. Its students meet in the Maxwelton Valley. Stay tuned for a story on this new sapling school grown from the WIWS mother tree planted 34 years ago.