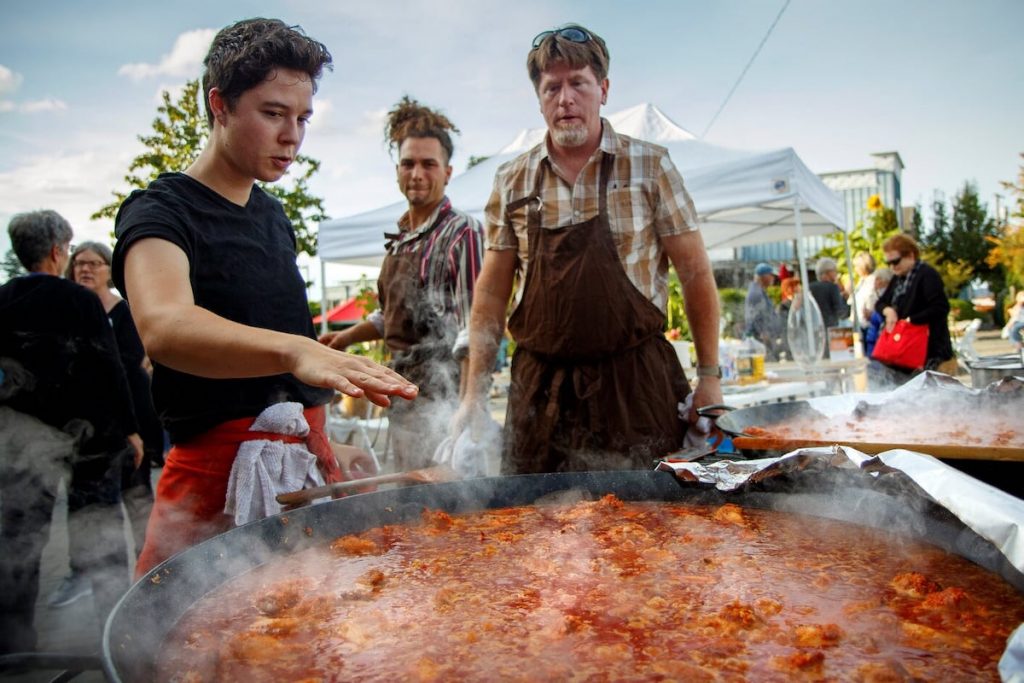 “This year’s turnout was off the charts!” writes Chef Vincent Nattress of Orchard Kitchens, commenting on Orchard Kitchen’s web page (where you will see the some of the same photos as posted in this story). “We were a major contributor to LANGLEY COMMUNITY FEAST this year. We donated our time and product for this event.”

Orchard Kitchens donated two giant pans of paella—mussels and shrimp and delicious sauce—expected to feed about 100 or so—along with the staff to prepare them. But word spread and more than 100 showed up for the free event, hosted on long tables on Langley’s Second Street plaza. Food ran out, but the bonhomie remained strong. Salad was provided by Good Cheer Food Bank. Bread grilled by the Langley Chamber of Commerce. Drinks provided by South Whidbey Commons. Treats provided the Langley Community Club. A large jar collected donations whose proceeds benefitted the non-profits donating to the event.

Writer Vicki Robin arrived by the time the paella ran out and I found her holding a long silver spoon scraping the last bits of rice and sauce from the three-foot diameter pan just to get a taste.

“I think this is awesome,” she says. “The most important thing is community coherence in the days ahead.”

Fred Lundahl is one of Langley Main Street’s directors. Of the second annual end-of-summer community event, he says, “Last year we did a potluck and there were too many mac and cheese dishes. This year we’ll see it how it works.”

How it worked is that folks chatted away while waiting in line for the food. Here is what they had to say when I stopped by:

Mary Ward, who with her artist/husband Ron Ward are part of the Whidbey Art Gallery: “I’m here because Ron likes paella.” Mary adds that the gallery flooded during the unusual two-plus hour thunder and lightning storm on Saturday September 7. “We saved all the artwork. Nothing was damaged.”

Don Wodjenski, aka “Wodje,” a beloved retired high school art teacher: “Just another opportunity for neighbors and the community. Nothing better than breaking bread.”

Diane Kendy, a community mover and shaker, who helped found the Saratoga Orchestra of Whidbey Island, to raise funds for preserving Saratoga Woods: “I think it’s fabulous. We have more than expected. The weather is cooperating. All is positive!”

Indeed, the early evening light had the poignant fleeting quality of summer’s end and the overcast days to come.

JoJo Wood-Buff, a popular retired librarian and community volunteer: “I’ve never seen a community do this kind of thing. This is awesome.”

Cynthia Kaul, one of the best people you meet at the Langley Library: “It’s brilliant! A lot of good people.”

Visiting from Illinois, Betsy and Rob Illings: “All these people talking to each other instead of on their cellphones.”

Deb Eimers, who you will see at Music for the Eyes: “This is my first time. So fabulous. Huge energy.”

Indeed, the feeling was good, judging from the crowds’ expressions.

Maisie Green, who lives nearby, stopped by with her son. “Sharing food with your neighbors is one of the best things you can do in the world.”

Kathleen Petrich, president of the Friends of the Library in Langley, and a devoted foodie adds: “Of course I’m here for the food. I’ve eaten at Orchard Kitchen and it’s wonderful.”

Langley City Council member Peter Morton used his powerful charisma to advocate for a city bond measure to improve its infrastructure:”This is a wonderful event. I can talk to the people about the Langley infrastructure improvement bond.” Island County will award $3 million toward the city’s need for upgrading its aging water system if a $7 million bond measure for Langley residents is approved. City of Langley folks have a chance to vote “Yes on 1056.”

By 6:30 all the food was served and those who didn’t get a chance to try the paella headed out to Langley’s local eateries.