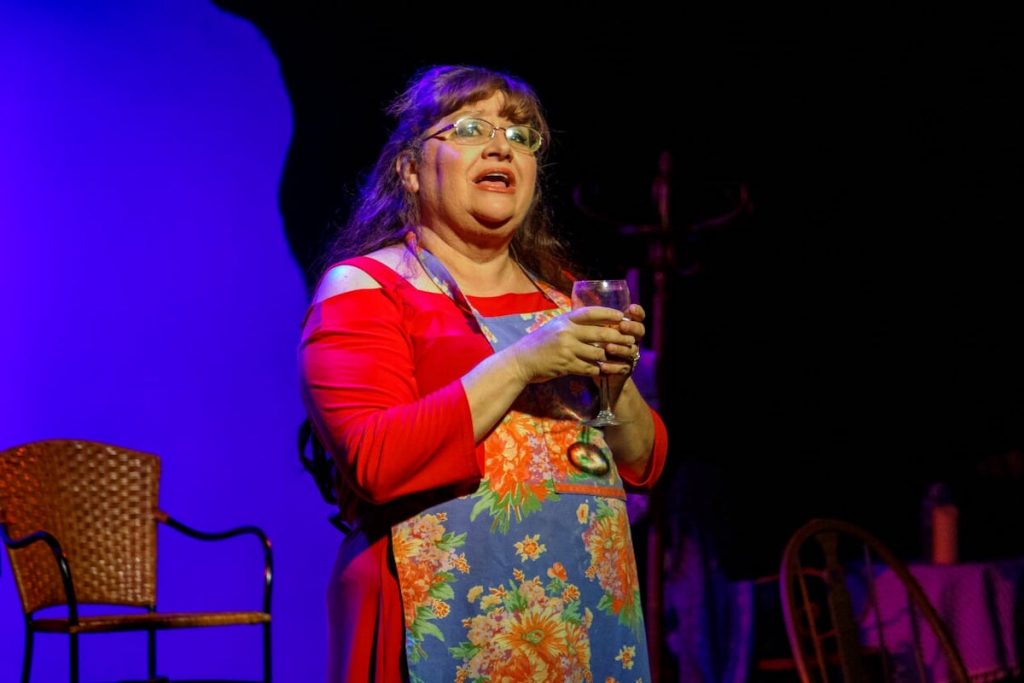 The many talents of Suzanne Kelman. See her in the play Shirley Valentine at Outcast Productions' Black Box Theater

Here on Whidbey Island many have reconnected to their creative selves and found the key to a full life.

In the play Shirley Valentine, on stage at Outcast Productions’ Black Box Theater this weekend through September 29, a British middle-aged married woman who has lost her way rediscovers herself by taking a leap out of her routine life. Based on a hit play that ran in New York and London, and later made into an Oscar-nominated film in1989, the story appealed to a local author and playwright who saw herself in the role of Shirley Valentine.

“I have wanted to do this role for over ten years and happened to be talking to Ned Farley (Outcast Artistic Director) about my ‘bucket list’ of shows,” says Suzanne Kelman, whose Birmingham England accent makes her perfect for the part. “He read it, loved it and offered me the role.”

Suzanne said she relates to Shirley Valentine in part because the character embodies the spirit of reinvention.

“So, this has been so amazing to do,” she adds. “Yes, I’m always re-inventing myself. The last big re-invention was when I became a screenwriter at 45 and then a novelist and a playwright. I had never written much before that. I now have 5 screenplays, 11 books, and a stage play. I have been fortunate to win multiple film awards including being honored by the Academy when one of my scripts became an Academy of Motion Pictures Nichols Finalist, winning first place from over 7,000 other scripts. Then with my Southlea Bay book series, in 2016 I became an ‘Amazon International Best-selling Author’ and my play was a Writers Digest winner. I actually believe there is nothing I cannot do. I just have to find unique ways to accomplish my goals as I age.”

Suzanne plays Shirley Valentine with great energy, authenticity and humor. You feel as if you’re listening to your best friend tell you about her marriage and how she has become a forgotten cog in the wheel of life. How her husband has a meltdown if he doesn’t have steak dinner ready on Thursday night the moment he walks in the door. Truth is on the Thursday night that the play begins, Shirley has fed the steak to a neighbors’ bloodhound she is watching while its vegan owners are away. The dog owners believe the dog must eat vegan as well, but Shirley thinks the notion is absurd and feeds her husband’s Thursday steak to the dog instead. At home in her kitchen with a glass of white wine, Shirley, the housewife talks to the wall, telling it that, “You used to be Shirley Valentine. What happened to her? We used to laugh all the time. She knew what happiness was. Then Shirley Valentine became another person on the missing person’s list. I’m a 42-year-old woman afraid of life beyond the wall.”

On this night Shirley tells her husband that a girlfriend invited her on a two-week trip to Mykonos in Greece. The awakening she experiences in Greece breathes new life into the woman who believed there was no life beyond the wall.

The one-actor play is directed by Gail Liston with Melinda Mack (who will be directing a play this March, Snow White and the Magnificent Seven) acting as supporting director while Gail is out of town. The play runs Friday through Sunday, Sept. 13 to 15; and 20-22; and Thursday through Sunday, September 26-29.

Suzanne’s latest book, View Across the Rooftops, will be released October 25. The story takes place in 1941 Amsterdam when it was occupied by Hitler’s Nazi soldiers. A math professor who lost his wife, has hidden his pain by escape into his teaching job. Yet he risks his life to hide a Jewish student in love with a Dutch woman. The Langley Library will host a book signing for Suzanne November 12 from 6 to 8 pm.

To know that Suzanne has tapped into her wells of creativity and flourished is an inspiration to us all. Brava!!!