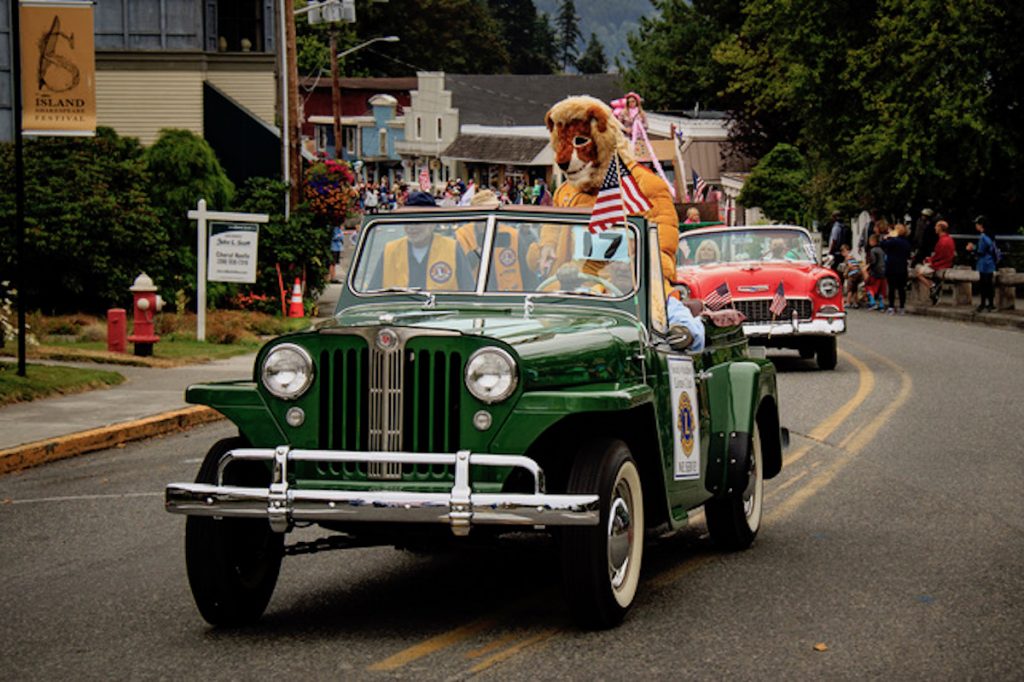 Motorheads gather at the Wi-Fire parking lot at 9 a.m. the first Saturday of the month. Hoods raised, hands in pockets, caps, a lotta goatees. Joshing and ribbing aplenty. Come here with your wheels, long as they’re interesting or fun. Have a question about your engine? Expect to get two or three or a dozen pieces of advice.

“One way or the other, we’re eccentric,” says Ed Halloran, wearing a Whidbey Island Car Show cap. The first annual car show was held last month at the fairgrounds. Meanwhile, Ed drove up this morning in his 1995 Jaguar XJS. “I drive this Jag when it’s cloudy and with the top down when it’s sunny.” He also likes driving his Shelby ’68 GT 500. Ed wears many hats, one of which is serving as commissioner for the Port of South Whidbey, which operates the Whidbey Fairgrounds and Events Center. I asked him why these guys (and a few gals) park their cars with the hoods up revealing engines you can eat off of. Ed says it’s often the engine that really gets conversations going. “Is it a stock engine? Is it hand-built? Engines generate a round of discussion. If you happen to be hearing a funny noise you can come here and three, four people can help.”

The Whidbey Island Car Show, held at Whidbey Fairgrounds last month, exceeded organizers’ expectations for this first-time event. The free admission show drew crowds from around the island and beyond. Generous sponsors raised about $6,000 that were donated to local causes. Jim Simpson, owner of CarsYeah, also known as Contemporary Classics of WA, a Clinton-based classic car restoration shop, was one of the organizers. The car show grew out of an informal car club that met for years on the first Saturday of the month at Gerry’s Kitchen in Freeland. Jim and his buddy Gerry Woolery, a former Disney cartoonist, and owner of Gerry’s Kitchen from 2004 to 2014, loved classic cars. Together with their buddy Dave Hardesty, owner of Island Auto Supply/Napa Auto Parts next door, and a few other motorheads, the gathering grew and flowed. Following Gerry’s death in 2014, the car guys and gals started meeting in the Wi-Fire parking lot instead.

“What’s beautiful about this car club is we’re here because we all love cars,” Jim says. “God’s honest truth is no one cares what you bring as long as it’s fun. Every automobile has a story. The stories bring life to the car.  Without stories the car is just a lump of metal.”

Landscaper Bruce Bell and his partner Heather Klein helped in organizing the Whidbey Island Car Show and are regulars at the Wi-Fire parking lot gigs. “Jim’s an amazing individual who’s always giving back to the community,” says Bruce, decked out in purple for the Huskies game that night. “We talked about how to give back to the community and we thought, why not a car show?”

Heather especially knows about giving back. She was the recipient of Good Cheer’s food bank and the kindness of friends following a divorce in 2012 that left her working four jobs to provide for her children. One of the jobs was running a small engine repair business she had with her ex-husband and continued to operate following the split. Heather grew up liking to tinker around engines with her dad.

“I kept telling the kids, someday we’ll give back,” Heather says, recalling the memory.  Then she met jolly Bruce Bell and they clicked. “The car show was our way of giving back,” Heather adds. “It’s cool that it’s gone full circle. This is more than about cars. It’s about helping each other. The generosity.”

“The car show put people in the right spot to do things. Dave, Ed, Jim, Jim Freeman as the emcee…”   Bruce says, recalling how  everybody came together and ended up raising money as well. The sponsors who helped make the car show a success were many. “Take Jim Simpson. He gets called to judge things in Europe. He judged at our car show. He’s the kinda quiet guy behind the scenes.“ In  reference to his love of football, Bruce says the event was a Super Bowl and looks forward to hosting it again next year.

Back at Saturday’s gig, Dave Hardesty pulls up in an ice blue Isuzu-117 that he bought from Jim Simpson. Dave enjoys buying and selling and fixing and talking cars. Earlier I had been talking with a trio of joshing old-timers, two with the last name of Brooks, not related, but friends. One of the Brooks guys has a secret location man shed in Greenbank that his buddies use to tinker and fix engines. One of the guys, Norm Keseric, drove up in a classic yellow ’62 Porsche Coupe. I asked Norm if he knew Ron Atlee, a crusty creative Brit who refurbished a classic orange Porsche. I mentioned Ron’s dying in 2016. Bob asked where it is. I thought he meant Ron and replied, “On the other side, he died.” Bob said, “No, where’s the Porsche now?”

In repeating this conversation to Dave Hardesty, he joked, “We acknowledge we’ll be dust. But the cars will live on. This group is not about bringing fancy cars. It’s about the enjoyment. We’re all enthusiasts.”

Another enthusiast is Eric Olsson, whose 1949 Jeepster is a dark-greened beauty. “It drives like a ’49,” Eric says. “See that big steering wheel? There’s no power steering.” On his friendship with Dave Hardesty, Eric says: “Dave saved me a lot of money and heartache with his advice. I’m putting together a ’54 Corvette. Dave’s helping me orchestrate that so I don’t do anything stupid.”

Eric mentioned just returning from a 2,500-mile road-trip to Pebble Beach with a fellow motorhead, Ed Halloran, mentioned above, who drives a  red ’95 Jaguar XJS. “It’s a Mecca for cars,”Eric says. “There’s historic car races. We watch the rich people. See the celebrities. This was a once-in-a-lifetime for me. The highlight was crossing the Golden Gate Bridge. Thirty miles later, I was in the front seat of a tow truck. The alternator went. We got along the whole trip.”

The heads turned as a pristine turquoise and cream ’56 Chevy pulled into the lot. “We were just driving by and saw the cars,” says Jane Morgan. Jane is the granddaughter of Richard Clyde, who ran Clyde Motors on the corner of Anthes and First streets in Langley (now the abandoned Mike’s Place), along with the Clyde theater, now run by Blake and Lynn Willeford. Her dad recently passed away and she and her husband, Eifion, a Welsh sheep-shearer who comes to Whidbey twice a year to trim the wool, were in town. Usually she and her husband live in Talybont-on-Usk, a picturesque village in the heart of Brecon Beacons National Park. She was introduced to Dave Hardesty about selling her late dad’s mint-condition cars. Such is the magic of Whidbey. You never know when the next bit of serendipity will come round and there it is.

As the morning waxed, the motorheads got in their cars and headed out to their lives, their man sheds. Look for them again the first Saturday in October and be a part of the scene. Might learn a thing or two.