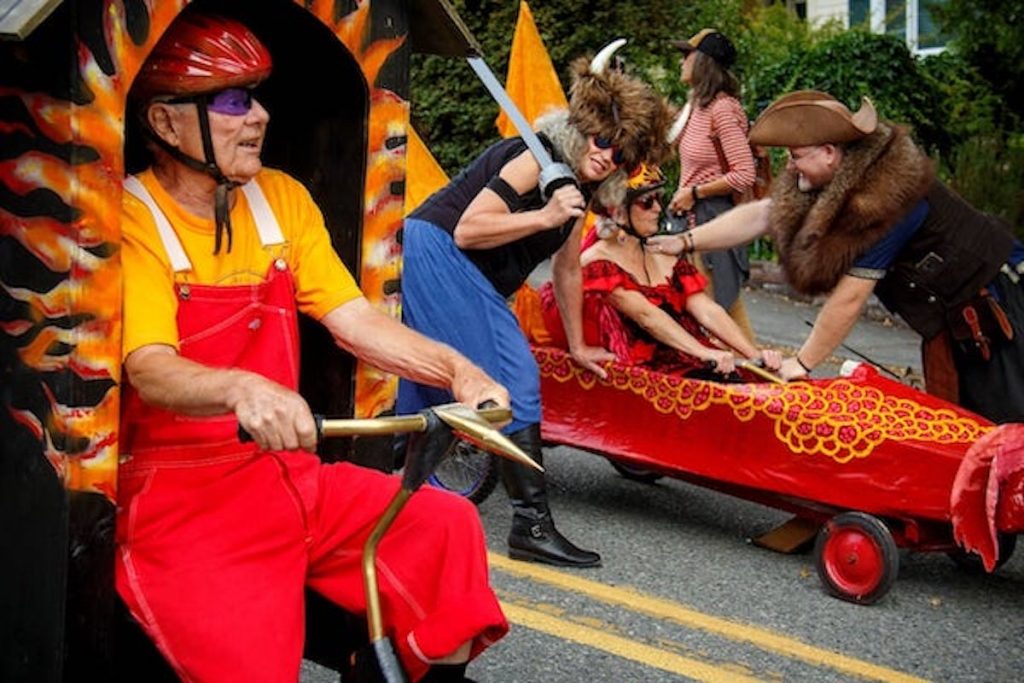 Gary Piper pilots a flaming outhouse in a grudge match against his competitor's daughter, Gretchen Lawlor in a red dragon.

When This is Whidbey debuted last year, we published Peter Lawlor’s Last Ride—Perhaps.

New Zealander Peter Lawlor, a beloved poet laureate of Langley, was nearly 97 when he competed in last year’s Soup Box Derby, racing his red hot chili pepper in a grudge match against his rival, Realtor Gary Piper, driving a surprisingly fast outhouse on wheels. The two had competed for more than a dozen years. Peter thought it might be his last race.

“Hello Pipa,” Peter called in his New Zealand accent, as Gary Piper, dressed in red overalls and flame-patterned socks, walked by as his outhouse, bearing the license plate IM4U2GO, was towed uphill on Langley’s First Street.

Pointing at Peter, the elven-faced realtor called, “This is for you, Buddy.”

Peter is still with us this year, but no longer racing. His daughter Gretchen competed against the outhouse in Peter’s red-hot chili pepper remade into a dragon. The outhouse won each of three heats.

“I’m not doing it for speed, I’m going for style, posture and attitude,” says Gretchen, an artist/astrologer who looks a lot like her dad.

Peter, dressed in a gold-trimmed red velvet jacket and wearing a red crown on his mane of white curls, was dubbed the derby’s ‘King Emeritus,’ by friend Jack Robert, who was dressed for the day as a pirate. Peter’s girlfriend Robertae Brown, flew out from where she lives now in Honolulu to visit for the month. She and Peter had been introduced through the Internet 17 years ago and met on a blind date at Third Place Books in Lake Forest Park. “We have a lot in common,” Robertae says, while we sat together on a straw bale. “I was a music major and he has a library of classical music. He’s so vibrant.”

Robertae says she has been feeling low of late, what with the politics and state of the union. However, she said her spirits were lifted at seeing how the Langley community comes together in a spirit of fun and connection.

During a break in watching the racers, derby announcer Michael Land handed the mic to Peter, who had written a poem the day before. “We look forward to your poems for the next twenty years,” Land said.

In a clear New Zealand-accented voice, Peter stood under the brilliant blue and cloud-filled sky and read his poem, “Soupbox Derby”:

Come listen to my song.

We’ve raced the Soup together.

We ain’t never done no wrong.

We’ve braved the steeps of Langley

Pooper scooped at the Doghouse door.

We’re neither rich nor poor.

We’ve built our wheels upon our dreams,

Never counted up the score.

Our soup box derby has been the means

Of competition and more.

A wine barrel and an outhouse

A coffin and an enchilada

I have to say dear soupers

That my day has come.

I have to bow out and leave it to you

My racing days are done.

I’ve preserved my coffin for the hereafter

I have handed over the torch

To Gretchen in her red fiery dragon

To race Piper down the course.

So cheers to you brave Soupers

In your creative wild machines

With gravity, no gasolines

So remember in August or September

Say your prayers the night before.

You’ll be saved by bales of hay.

Straw bales line the street as cushion to protect the crowd and for derby racers whose wheel pops off, or, for a pair of young brothers who crashed into each other and the straw bales.

Other regular derby grudge matches include Langley Mayor Tim Callison and his ‘One Fish, Two Fish’ vehicle challenging Vanessa Kohlhaas and her family in its rainbow-hued ‘Woodstock.’ Vanessa is a teacher at the Whidbey Island Waldorf School. In her email is this quote from early environmentalist Rachel Carson—which embodies the spirit of our Soup Box Derby and the community—”If a child is to keep alive his inborn sense of wonder without any such gift from the fairies, he needs the companionship of at least one adult who can share it, rediscovering with him the joy, excitement and mystery of the world we live in.”

One of the memories I’ll carry from this race is meeting a boy who stood at the finish line with a black and white racing flag, his whole attention on each of the racers.

Dressed in Flash Gordon attire, young Rhyze Greer, who competed last year and decided he wanted to help out in the 2019 race, gave his compadres an assist at the finish line.

The score for the event was provided courtesy of Langley High School Band leader Chris Harshman and his family.

Meanwhile, Peter raced in a coffin-shaped vehicle in the early days. “I’m keeping it for my internment,” Peter says after the race. “I’ve got a plot up at cemetery awaiting my green burial. I keep it in my laundry room and like showing it to people.”

Gretchen says her dad jokes that the coffin will be his last ride.

The Soup Box Derby began in 1972 and still celebrates one if its originators, Tucker Stevens, who died in 2015. Tucker’s wife Kathryn and her friends make the quirky trophies awarded to derby racers. The race is a collaboration of the Langley Community Club and the Langley Main Street Association.

Chasing the blues away with a sea float scramble