Summer street dances bring us together 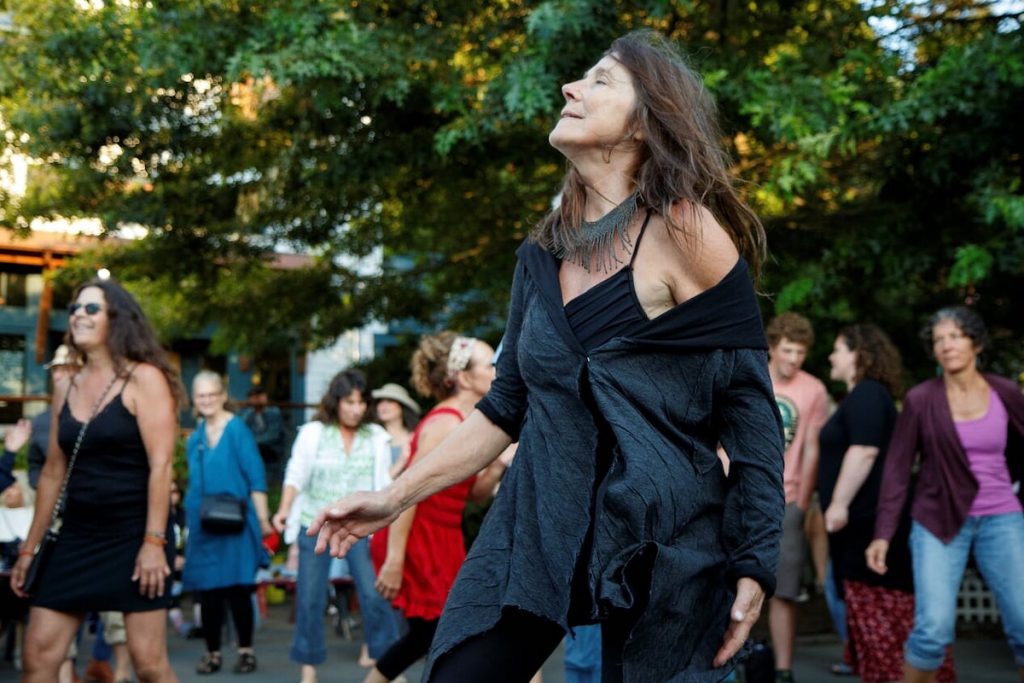 I’ve always wondered about the power of dance. During our days of uncertainty in the big world, it’s a comfort to know we can recharge our batteries by dancing in our little world of Whidbey Island.

So, on Wednesday August 7 I was lucky to get a story and dance with people I care about and just let go to the music of the Nick Mardon Trio.

During the summer, Goosefoot, whose mission is to “Bring neighbors together to nurture a sense of place and community, preserve rural character and enhance local commerce,” hosts seven free concerts at Bayview Corner. The non-profit’s Sami Postma has a a knack for booking the best bands which draw crowds and get people up and feeling it.

I talked with Chuck Pettis of the Earth Sanctuary, who was sipping a Lagunitas and viewing the dancing scene with appreciation.

“I think it’s a beautiful evening (it was. Balmy and a feeling of well-being in the air). This is a really good blues band.”

Chuck said he was getting ready for a 180-mile walk on the Cornwell Coast with his artist wife Claudia next month.

Sharon Emerson and her husband Charlie Snelling danced together. “I come from Austin and one of my joys was dancing to music outside,” Sharon said. “I like all the ages dancing here.”

“This is our fifth street dance this summer,” says Marian Myszkowski, Goosefoot’s program director. “We brought back the Nick Trio band. Nick’s like 20. He has high energy. The band’s music is a fabulous way to get the community together. Over the years relationships have formed. I’ve made friends here.”

Also mingling among the dancing crowd was Leigh Bloom, who is a director for Goosefoot. “I’ve watched these guys play for a while now,” Leigh says. “You’re lucky to see him now. I predict he will go far. I once saw him perform at Ott + Hunters (a popular wine shop and music venue on First Street in Langley). He had booked a gig on his graduation day.”

“This is my happy thing,” says Cordula Hetlund, dancing around and hugging friends.

Folks that night said to be sure and check out Whidbey’s garage band PETE the band. They will be playing Wednesday, August 21, closing the season for Goosefoot’s street dances.

This is Whidbey’s David Welton shared photos of dances past: