Getting to know Dungeness crabs 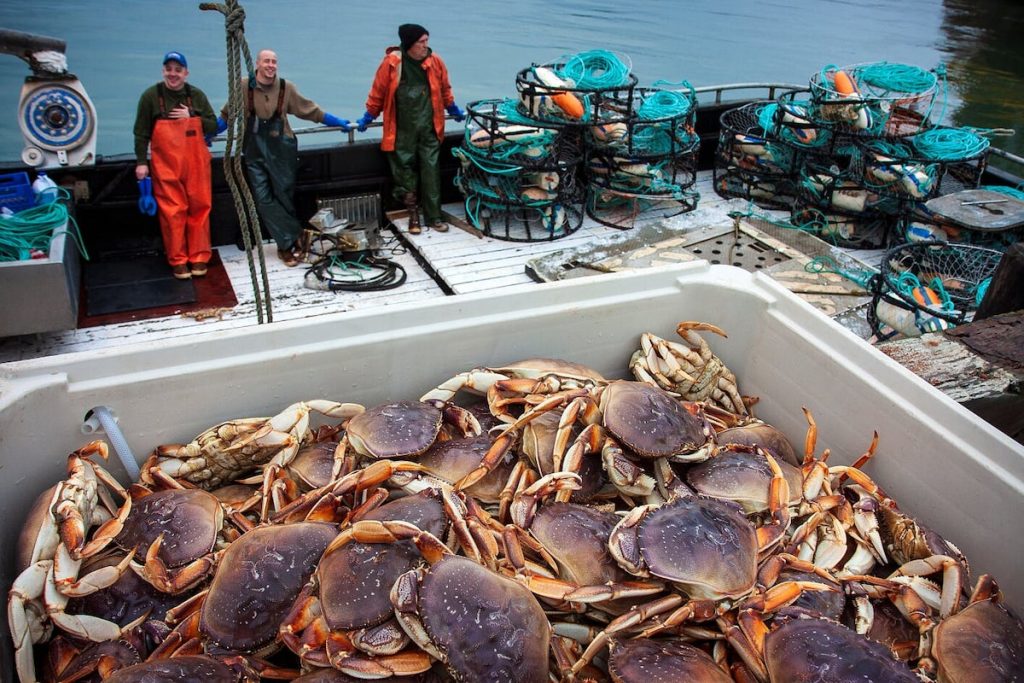 The crabbing culture is deeply embedded in the Pacific Northwest psyche.

Cancer magister, also known as Dungeness crab, are found in murky saltwater and eelgrass beds from Alaska to Mexico. They can regrow lost appendages and are four to five years old before growing large enough to harvest. Only the polygamous males are harvested in Washington State.

Alaska Department of Fish and Game reports that large female Dungeness crabs can carry as many as  2.5 million eggs until they are released after hatching. Females come to sexual maturity at two to three years old and mate when they are in the soft shell molting stage. Males have a narrow arrow on their belly or apron; female aprons are large and wide. Check out this site for identifying photos. Crabs can live up to 13 years and are omnivorous bottom feeders. They use their claws to tear their food and feed and defend themselves. Crab rely on their sense of smell, found on the antennae next to their eyes to find their food. It is this sense of smell human harvesters use to lure crab into crab pots. Crabs’ natural predators include: other crab species, halibut, dogfish, sculpins, octopus, and sea otters. Salmon feed on crab larvae when they are available.

Our first experience eating Dungeness  crab was in August 1999 when we stayed with friends in Greenbank and this experience, among others, influenced  our moving to Whidbey Island the following April. Our friend David Schaal caught a number of crab then and we enjoyed eating them on a newspaper-covered plank, cracking the shells, picking out the sweet meat to dip in melted butter. Afterward we gathered the shell bits to give the family’s hens a treat to pick and cluck over.

Langley Mayor Tim Callison took This is Whidbey’s David Welton out crabbing recently. Only males 6.25 inches and wider can be harvested Thursdays through Mondays from December through September. The photos here detail that outing. This video details how a crab pot works.

Bells Beach resident Gary Bluhm spent summers as a boy on Whidbey in a cabin he lives in now with his wife Jan. Gary owns several boats and enjoys the camaraderie of the crabbing culture.

“We didn’t go crabbing when I was little,” Gary says. “I can’t tell you why there was no one around crabbing in 1953 when I was 10. We fished a lot, though. It wasn’t until I came back 22 years ago that I got into crabbing. The other guys were crabbing then. It was natural to give it a try. I did with a neighbor friend, Joe Wolcott. We hooked right up after we got here. For years I’ve used salmon parts for bait. First I got it all free for about 12, 15 years. Then they started charging $5 for a 5 pound bucket. I still use salmon parts. I supplement with turkey legs or chicken or turkey parts. We eat crab many ways. We use it for salads. Just last night, Jan made a sandwich with cheese. It’s delicious. She makes a casserole.  When she has time, crab cakes. Crab Louie is my favorite. We like it fresh and we definitely freeze it so we can eat it during the winter. It’s a wonderful resource we have out here. These days crabbing is not as good as it was. Recently you don’t know if you’ll get something out of a crab pot.“

Mayor Tim weighed in similarly to Gary in terms of bait and ways to eat crab: “My favorite crab bait: Salmon heads, or turkey leg. Favorite way to eat crab is steamed and chilled, crab cakes, or crab Louie salad.” And Tim says his wife Robin Black’s crab cakes are the best.

“It’s a real joy to show and share the Whidbey crabbing experience with my children and theirs, especially with the amazing meal that follows,” Carlson writes in an email. “There’s nothing better than eating steamed Dungeness crab fresh-caught, dredged through melted butter with lemon juice. Nothing like life on our island and the opportunities to fish crab, salmon and trout, forage for berries and mushrooms and harvest from your own gardens. I’ve never experienced a place like this before. I love our island life. My daughter-in-law was born in Coupeville when her dad was a Navy pilot at NAS Whidbey. The family later moved to Minnesota and her return to visit the island she was born on was a wonderful experience for her to share with my son and grandson. They were ‘amazed’ with Whidbey Island and the quiet, peaceful quality of life we found. They will be back again next year to also share this with their daughter and son, while sharing time and adventure with Grandma and Grandpa.”

While it’s traditional to throw crabs whole into a boiling pot of water, there’s science now documenting that the crustaceans feel pain. It takes two to three minutes for them to die in boiling water, during which time their limbs are shed. A more humane approach to cooking them could be cleaving them in half, and cleaning out the potentially-toxic guts or hitting their belly shell with a rolling pin to remove the shell before steaming them. Here’s a recipe with a mindful approach to cooking crab: Epicurious recommends killing them first before steaming them.