Earth, food and art are the heart of South Whidbey Tilth Farmers’ Market 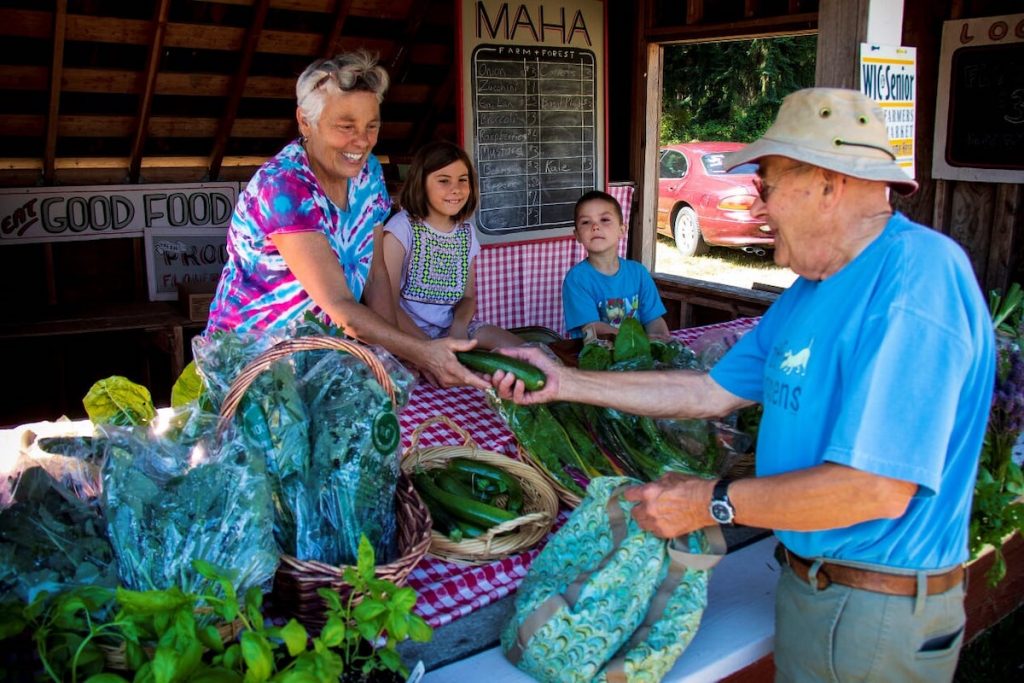 A welcoming and gracious space with soul-satisfying locally-made food, South Whidbey Tilth  Farmers’ Market each Sunday from 11 till 2 recharges one’s battery for the week ahead.

The Skagit people, once called our island Tschakolecy, ‘Land of Abundance.’

Nowadays the 11-acre site at the corner of Hwy 525 and Thompson Road, hosts community gardens, a sustainable agriculture center, farmers’ market buildings, and a hobbit-shaped structure built with help from Eli Adadow of Ancient Earth School of Natural Building.

On his web page, Eli writes: “BUILDING WITH LOVE. I believe we are all natural builders at heart.The pattern of that language carries through from our ancestors. All we must do is listen.”

The hobbit-style house provided a month’s shelter for a Tilth volunteer who camped there during July while preparing to start a new life on the big island of Hawaii. In this community he found a welcoming place reflecting his values of sustainability, inclusivity, land stewardship, and locally made food. His friends, Tilth vendors Leah and David, a couple who run both the market’s cafe and produce booth, serve pizzas, frittatas, crispy cheese breads, fresh garden salads, and delicious desserts.

Tilth volunteers help in the front of the kitchen and raise money for Tilth by selling beverages, serving food, and cashiering so the cooks can focus on filling the many orders that are made. Lazarus helped in redesigning the menu as a favor to his friends for their hospitality.

“I’ve tried just about every pizza place on the island and I haven’t found anything that comes close to the quality here,” a Tilth visitor says, enjoying the Sunday afternoon breeze around the shaded cheery yellow oil-cloth-covered table outside the open air cafe. “Everything else I’ve tried of theirs is delicious.”

A month before South Whidbey Tilth opened its seasonal farmers’ market in April, David Prisbrey and his wife Leah Claire were invited to compile a menu and get ready to run the cafe, which serves Sunday market visitors. Prior to then the couple had planned to vend their produce from their booth with David’s teen son Atticus. They farm a quarter-acre plot in Tilth’s community garden. Now they run the kitchen and Atticus is in charge of their produce booth.

“Making food was a big transition to our focus of running the booth,” David says, taking a break, following his work making pizzas from 11 until 2.

Leah adds: “We’re so fortunate to have found Tilth because we can’t afford to buy land to grow on, much less the costs of a brick and mortar restaurant. Farming and cooking at Tilth allows us to keep our prices low, and we’re really grateful. Poor people being able to access locally grown food is kind of our driving motivation. I grew up here and David and I moved our kids back here from West Seattle two years ago. We moved into my childhood home, with my parents. Intergenerational living, affordable housing, is another thing that allows us to do this very cool thing that we’re doing. We’ve got 24 chickens and six ducks at the house, so our egg needs at the Tilth kitchen are met; everything we can do or grow in-house, we do.”

While sitting in the shade eating my pizza and enjoying the local scene, folks stopped by to say hello.

Kimothy McJury is a regular Tilth visitor, a volunteer and a former booth vendor who sold barbecue. She stops by to say hello. “What it really feels like to me is ‘the real deal’ – a real farmer’s market,” she wrote later in an email. “This includes great produce, some very unusual handmade products, an easy-going atmosphere with scattered seating, delicious food, and a place where people make friends. It is low key and comfortable.”

Annabet Berlin is another Whidbey local who often visits the Sunday market and is a great advocate of David and Leah’s cooking.

“OMG—the frittata,” Annabet says, insisting that I try it next time around. I had ordered the pizza, with David’s signature crust, crunchy and flaky with OSM farm greens, oyster mushrooms, onions, garlic, feta and mozzarella cheese. My senses of taste and smell and touch reveled in the scent, flavors and feel of the fresh pizza.

Kirstin Clauson runs a handcrafted soap booth at Tilth and serves as its Market Manager. You may also see her working at the Flower House Cafe. “I’ve always liked Tilth and its focus on organic agriculture and caring for Mother Nature,” she says. “Tilth is a just really nice space. It’s a beautiful space to have a market in. Both kid- and pet-friendly, it makes it a safe place where it feels good to be, and you feel like you’re still out in Nature. I also like it because it’s like the last stand. Before things get taken over and everything gets paved over. A place where entrepreneurial interests and community can exist together with being in Nature.”

South Whidbey Tilth was formed in 1982 and bought its acreage on April 21, 2000. The group focuses on growing healthy food with the least harm to the environment while offering the ‘fairest rate of return’ for both producers and consumers.  Its roots began in the 1970s movement of Northwest farmers looking for ways to promote ecological and sustainable farming. Read about its history here.

To become a member/supporter of South Whidbey Tilth, visit this page.