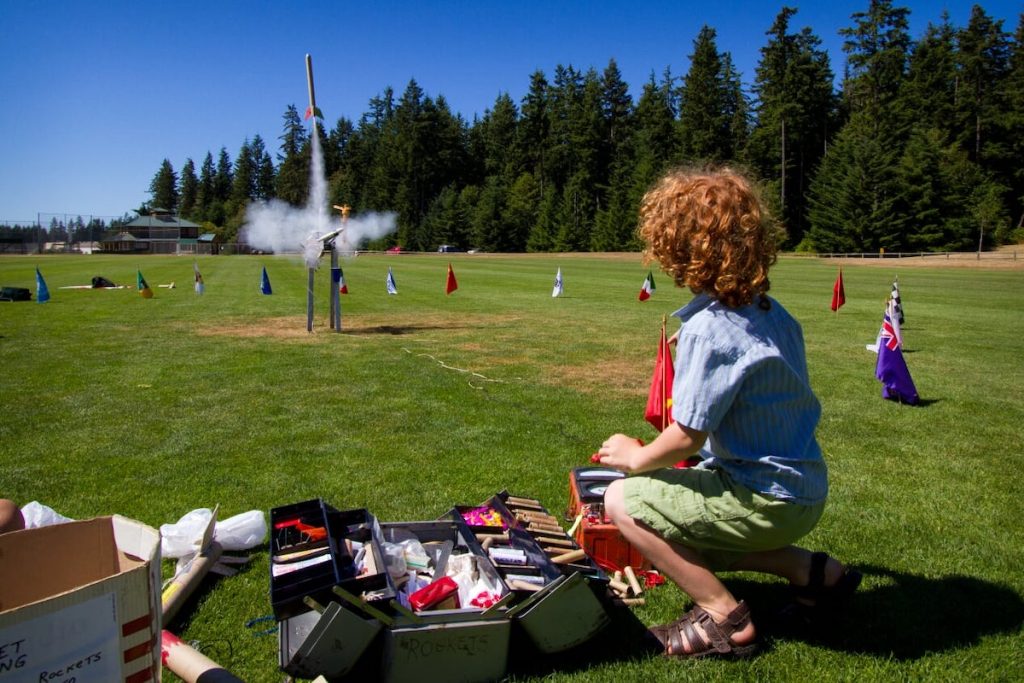 Thrill of take off in Leonard Good's model rocket mini-camp with South Whidbey Parks and Recreation.

If you were one of the lucky kids to take Leonard Good’s model rocket mini camp, you have met a man who enjoys sharing his love of things that fly.

For the first two weeks in July Good taught the Model Rocket Mini-Camp through South Whidbey Parks and Recreation.

“It’s a full class and a little bit crazy,” Good said from home last Tuesday following a day of teaching. “I’ve always been interested in model planes and model building. I wanted to do something that involves building something out of nothing.”

During the year Good went around to various doctors’ offices and asked that they save the examining table paper cardboard core tubes for him. They’re about two feet tall and the right size for model rockets. He had plenty when it came time to teach his two classes of about a dozen students each this month.

Jaime Ruddell, whose daughter Abby attended the first model rocket camp, says: “Abby had a great time. Mr. Good has a way of teaching that never feels like a lecture. He partners with the kids in learning. He builds on their strengths and meets them where they are at. She had a wonderful experience!”

At the Parks & Rec. office classroom on a misty cool Wednesday morning this week, the boys had already decorated their rockets with sharpies. Plastic Easter egg halves comprised the cone, which would be attached to a parachute for flight the next day. Rocket fins made of light wood that Good cut himself, were attached to the base. In addition to the rockets, Good had cut and scored wings, tails and a body for making little flying planes.

This week the class was made of boys 9 to 13; last week it was a mix of boys and girls. One boy had turquoise hair. One sported a short Mohawk strip. Parents helped in gluing parts together. Dressed in plaid shorts and a striped button down shirt, his often seen summer clothes, Good walked around the tables arranged in a U-shape, gently repeating the steps for assembling a plane. A couple of the boys couldn’t resist poking and teasing each other, completely missing instruction when Good was on the other side of the room.

“To make your planes balance you need to put the clay in the right place,” Good said to the other side of the room, instructing where to put a weighted putty that would allow the model planes to fly straight.

Meanwhile at the other end of the room the boys were jostling and wrastling.

“Hey look, he drew this on me with a Sharpie,” one boy said, pointing out a new black freckle that his neighbor had painted on his arm.

On Thursday the two-inch rocket motors would be inserted and the rockets ready for takeoff.

“They’re manufactured by an American company, Estes Rockets, “ Good said. “The convenient thing is they’re always the same size for each given class. You can buy them to have different times. The parachute can open in 3,5, or 7 seconds. If it’s windy you’d like to have seven seconds. They’re dependable and set off by electricity (wired to a car or RV-type battery).

“The rockets are timed so that they go whoosh, coast, and pop out a parachute. There’s no steering. No way to control them. Sometimes they get lost in the trees. They can shoot them over and over if they buy a new rocket motor. It clips on the tube. When you pick up the rocket after its come down, you can pull the wire off and put in a new motor.”

Good said he didn’t mention Apollo 11 and its 50th anniversary this month of landing men on the moon while teaching. He worked hard just to get the basic understanding of rocket physics into his students. “It’s been in the news so much,” he said of the media attention.

One thing that is mentioned by those who know him, is how much Good is appreciated. A Hometown Hero, a former teacher and assistant to his talented musician wife Linda, it seems everyone gets to know the Goods if they’ve lived on the island for any length of time.

“I love Leonard,” said David Welton, This is Whidbey’s photographer, who flies model planes with Good each Sunday, along with other buddies who enjoy flying together. Ela Winstanley’s son Ebey had the good fortune of Good’s teaching science while at the Cedar School, a cooperative school that was popular about ten years ago. Though she has since moved from the island, Ela happened to see Good in a local parking lot this week. He greeted her warmly, she recalls.  Students remember him from his classes in science and physics and photography. “I taught in the old style with film and development, black and white and paper. None of this fancy stuff,” Good chuckles.

Leonard and his wife Linda, who is a cofounder of Island Strings, which has taught stringed instruments to probably thousands of students since 1974, live in an interesting house with the things they have collected over the years. They enjoy visits with their children and grand children. Leonard drives a vintage orange VW camper van whose back side is decorated with bumper stickers. You feel good simply talking to him.