An old tradition of celebrating our country’s freedom 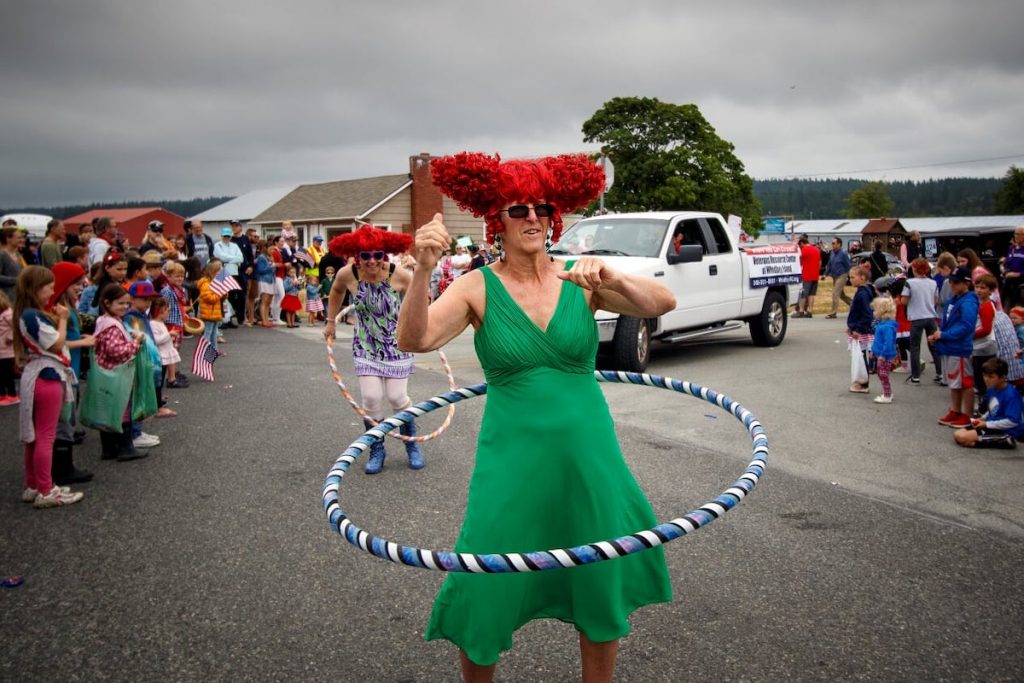 Following big fireworks at Freeland Park the night before, more than a thousand people converged for the 104th annual Maxwelton Parade at noon July 4th to celebrate the freedom our country still represents, watch a home-grown parade, gather parade-tossed candy, play games, and eat hot dogs and pie. The cool overcast weather kept everyone from overheating this year.

The popular event was hosted by the Maxwelton Community Club. It was sponsored by Clinton businesses Pickles Deli, Savage Screen Printing and Embroidery, Clinton Food Mart, and, Jet Java in Clinton, which paid toward the cost of putting on the parade. Purchase of annual fair buttons for a dollar and t-shirts for $15 also helped cover the costs of the popular parade that locals say kicks off the tourist season at full tilt.

Fire Captain Tom Peterson, who has headed Maxwelton Station 33 the past 23 years, was Grand Marshal this year.

Riding in a vintage red and white convertible with his wife Katherine and grown sons, Craig and Ross, Tom Peterson said he was ‘kinda surprised’ to get the call choosing him to lead this year’s parade. “I’ve ridden in the firetruck the other years,” he said. Working on the mainland as a circuit board designer,

Peterson said his volunteer work as fire captain keeps him busy. And he welcomes new volunteers! With 85 percent of the calls to the station taking form in requests for medical assistance, such as helping someone who has fallen, Peterson said volunteers and staff get an average of six or seven calls a day; 1,413 calls this year as of last week. Living on the island with his family since 1991, Peterson said he flies model airplanes with friends in his spare time.

The parade dates back to 1915 when the Dave Mackie, an original builder of the Maxwelton Beach baseball diamond and stands and beachfront park created the parade for locals and their families. Mackie platted the area in 1905 and started selling lots, advertising the community as “The Paris of the North.” He invited the Chatauqua, a traveling show of intellectuals to perform in an arena he built.

“My grandfather Robert and his wife Cassia Moritz began building their cabin in the early 1900s,” Urashan recalls. “I was born in 1927 and I walked in the parade from when I was little. My grandfather was a professor of mathematics at UW (University of Washington, Seattle), and he and his wife would travel every summer. They often traveled to the Orient. When I was five they brought me back a beautiful blue kimono and a coolie (cone-shaped) hat. I wore that kimono and hat and remember wearing it in the parade when I was 10. Many of the kids dressed up as Indians or colonialists. People made floats from farm wagons. One of Mackie’s twin daughters returned to the island after being widowed and sold bait and produce. She began to expand the business and carried cornflakes and ice cream. The store evolved from the need for her as a widow to support herself and her children. After the parade we had three legged races, sack races and egg tosses. In 1937 some of the neighbors commented about wasting eggs. They had gone through the Depression and worried about wasting food. My best friend Julia would come up sometimes for a month. We loved eating fresh clams that we would dig at Maple Point, and buy Crackerjacks and soft drinks–Coke was the first soft drink I recall–from the local store. We would read books into the night with our flashlights in the guest house (a bare bones shelter on her family’s property). There would always be a ball game after the parade. The Mackie family versus whoever else.”

To learn more about the park activities, contact the Maxwelton Community Club at 425-280-3876 or email them at maxweltoncc@outlook.com. To learn about the colorful history of Maxwelton Valley check out local writer Ann Linnea’s book: A Journey through the Maxwelton Watershed: A Natural and Social History, published in 2002.