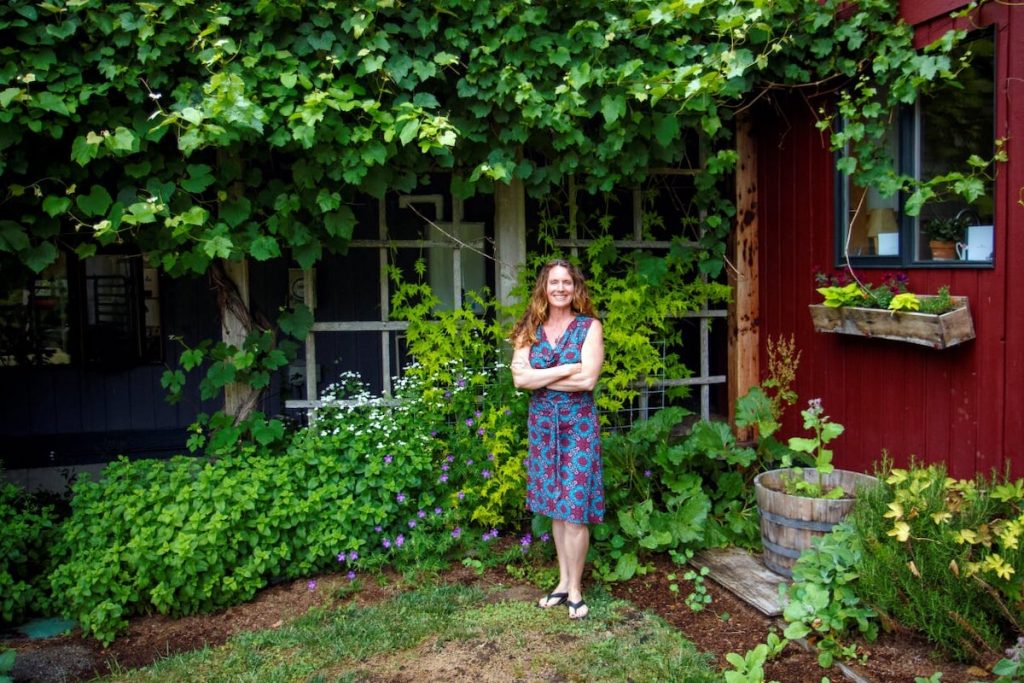 The smell of bakery and cinnamon wafting out the door is the first sign that something good is coming from the immaculate commercial kitchen housed on a five-acre Clinton farm.

Adding to the bucolic scene outside the kitchen, Fawn the goat baas hello, from where she hangs out with her hen friends in a fenced paddock. Hazel the tortoiseshell cat winds her tail in greeting around visitors’ ankles wanting to be petted.

Welcome to Primal Island Paleo Foods, a home-based South Island business whose top-drawer grain-free granola can be found in local and chain grocery stores from California to Alaska.

Marybeth Shirley said her crew bakes and mixes about 2,000 10 oz. bags a week that are packed and shipped to QFC, Safeway, Whole Foods, PCC Natural Foods, Metropolitan Market, and other grocers. Because the kitchen is certified gluten-free, no wheat products are allowed in the kitchen, which contains convection ovens, shelves, pans, bowls, bins of ingredients, boxes, and a big work surface.

Working full-time standing on their feet, lifting 60 pound bins of honey at times, the Primal Island crew work hard yet maintain a good camaraderie. Kitchen manager Hannah says, “We have great muscles. It’s pretty low stress here. I joke with Marybeth that people (who dine on the cereal) feel the love we have here.”

“We have a great team who is dedicated to making the best granola you’ve ever tasted,” Marybeth says.

Wearing disposable gloves and working with Katherine and Alyse, Hannah hand-mixes organic ingredients in enormous stainless steel bowls. The granola is made of toasted coconut, pecans, almonds, cinnamon and flax seeds, mixed with honey and vanilla. There are four flavors of the grain- and gluten-free product: cranberry, blueberry, dark cocoa, and toasted coconut. To keep up with demand, Marybeth says, the product delivered to grocery store is made the week before.

Before moving to the island with her family in 2001, Marybeth managed and catered for Pasta & Co. a small chain of Seattle-based speciality and gourmet foods. At home in Clinton she became a stay-at-home mom and active in volunteering at the Whidbey Island Waldorf School as well as farming their five acres. Following the tragic death of a young daughter Kathrine, Marybeth looked at how she might best find meaningful work while caring for her son Rowan and daughter Rose. Making friends with families in her children’s’ classrooms at the start, Marybeth recalls a time in 2011 when she was inspired to start the now-successful granola company.

“Dana MacInnis and I were on a walk and talking. I was transitioning from being a stay-at-home mom to a single mom. Dana asked what I would do. I said ‘Start a paleo-food company.’ And so I did. I worked our farmers’ market. I approached The Goose grocery store. We sold it in brown paper bags with handmade labels at first.”

While eating a paleo diet may seem like a fad to some, Marybeth said eliminating grain and gluten from her diet, along with regular workouts at Vibrant Fitness made her feel better and stronger. She credits Mark Sisson, a fitness and health practitioner for inspiring a healthier approach to exercise and eating.

With confidence gained from the local’s positive response to her granola, Marybeth expanded sales to Seattle-area and Port Townsend markets. Eight years later, she has worked with a talented graphic design artist to create premium packaging. In the past Marybeth’s parents applied labels to each bag of granola.

Creating a workplace community that thrives underscores Marybeth’s values: “Part of what I want to provide is local employment that pays well,” she says. “It’s important to provide a livable wage so that my employees can afford to stay on the island.”

Marybeth’s husband Gabriel Shirley works for a Seattle company and goes in once a week, while working from home the rest of the time. “He helps behind the scenes and in finding solutions,” she says.

Her daughter Rose helps in making Seattle deliveries and baking as well. The company owns two Toyota Scions that can each fit 53 cases of granola. Each case holds a dozen 10 ounce bags of granola. With the expansion of orders, Marybeth is looking at getting a delivery vehicle to hold pallets containing boxed granola.

Primal Island appeals to those on gluten-free diets, but the granola is popular with everyone because it tastes so good.

From the days of wondering what work would best suit her as a single mom, Marybeth now is enjoying her ‘woman-owned’ business and seeing it thrive. “My passion is in creating healthy food and making it available to as many people as possible.”