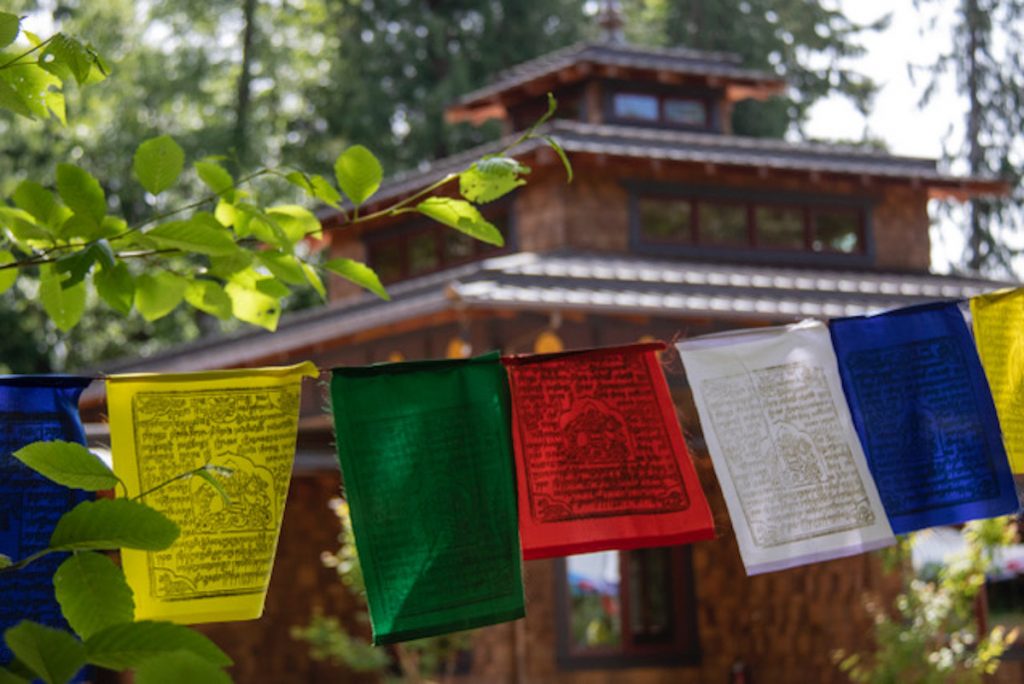 Visiting the Yeshe Long Dharma Center in Clinton for the first time this weekend was an experience in remembering our connection to one another, deep appreciation for sacred design, and the power of spiritually-based art.

The Clinton-based building on Humphrey Road began construction in 2017 and was completed this year. Funds to build it came from a wealthy unnamed donor who supports Tibetan Buddhism’s humanitarian values. Combining classic elements of Northwest style and traditional Tibetan temples, the building was designed in the shape of a mandala.

The weekend’s temple consecration was celebrated with the creation of sacred sand mandalas made by visiting monks who prayed for world peace and compassion while meticulously tapping colored sand through cone-shaped tools. One of the two mandalas was dispersed Monday, representing the Buddhist belief about the ever-changing impermanence of life.

Inside the three-tiered temple, Tibetan Buddhist religious icons cultivate wonder about their meaning. What are the stories represented in these sacred tapestries and colorful Buddhist deities? The temple reflects the beliefs of an old culture of nomadic people in eastern Tibet whose current religious leader brings a message of compassion to Western humanity.

His Eminence Dza Kilung Jigme Rinpoche, an important lama who teaches in the tradition of Tibetan Vajrayana Buddhism, was born in 1970 and is the spiritual leader of the Yeshe Long Dharma Center. During a pilgrimage to the United States in 1998, Rinpoche founded his non-profit organization, Kilung Foundation, which helps preserve and maintain his homeland nomadic culture and its Kilung monastery in Dzachuka in eastern Tibet. Rinpoche teaches in the Buddhist tradition of using time-tested tools to ending suffering and cultivating compassion. These qualities are further explored in his book, “The Relaxed Mind,” published in 2015. Rinpoche touched on these two qualities while addressing the overflow crowd June 9. His words carried a sense of deep compassion and cultivated hope in our times.

“The end of suffering is realizing all is connected,” he said. “Americans like independence. How can you be independent of our beautiful world? Sometimes we get angry at our own suffering. It brings more pressure on the circumstance. Letting it go, not being attached (ends suffering).”

On happiness and compassion, Rinpoche said, “If we wish to create a beautiful garden, we need rich soil. Inside our heart and mind is very much like that. Feel for the positive. These qualities will grow. Often we don’t have the feeling for being open. We have a lot of complaints. Change that into appreciation, respect, we can find more open hearts. This creates a great healing.”

Afterwards, a man in the audience asked, “How can we relieve suffering in these political and ecological times?”

Rimpoche said it was important to maintain a view of the world we wish to see by practicing mindfulness: “It’s very important that you don’t lose your view,” he said. “It is important not to be so suffering that your view is not true. Transform the discouragement in the environment and peoples’ minds. For the outer (our environment) don’t destroy. It’s very important to have respect so we can mindfully live. The sand mandala was dreamed through meditation. It represents beautiful things arising. [Yet] you can not hold down beautiful things forever.This sand mandala shows the compassion of Buddha. The mandala represents the universe.”

His message is designed to wake us up, get us to do the work. “Don’t expect the Buddha to do everything—’[people may ask]Please give me enlightenment’—it doesn’t work that way. The energy of this blessing is that we can enjoy each other. I’m showing you a path. Whether you take it is up to you.”

Local islander Jean Lepisto, serves as vice-president and treasurer, on the center’s board of directors, and co-director of the Pema Kilaya sangha (community of practitioners). She met Rinpoche twenty years ago and invited him to visit the island. Jean currently shares the post of co-director with Karen Carbone. After meeting Rinpoche, Jean along with a community of similar minds evolved, which grew to support his message and practice mindfulness meditation. Cary Peterson met Rinpoche through Jean and has been involved with the sangha since the early 2000’s. She later traveled to Tibet with her mom to visit Rinpoche’s homeland. She said the trip was life-changing. So was meeting Rinpoche.

“When Jean started bringing him to the island years ago and he barely spoke English, he still had such a strong energy of compassion that I knew that he was going to be my teacher,” she said.

Of the weekend’s event and Rinpoche’s talk, Cary said, “Isn’t it amazing how centered in compassion Rinpoche can be in the midst of a big event? So many people, and he has been doing this non-stop for days with all the temple activities. I think his compassion energy, which doesn’t cease, opens us up even more fully to the compassion and love and heart we all already have in ourselves. At least that’s how I think of it for myself. I couldn’t do the work I do in the community without this practice.”

Buddhism is the fourth-largest world religion, with Christianity, Islam and Hinduism being the other three. With more than 350 million followers, Buddhism supports the idea of karma: that experiences are the result of past actions, perhaps from previous lives. Releasing one’s attachment to desire and the self can lead to the eternally blissful state of Nirvana. Buddhism’s three main branches are Theravada, Mahayana and Vajrayana. It is premised on the writings of Siddhartha Gautama, from 500 B.C., also known as the Buddha. His perspective that all living beings in the universe want to be happy and avoid suffering resulted in a 2,500-year legacy that is still practiced today.

In the wake of the Chinese cultural revolutuon, which began in 1949 when Tibet was invaded and the Dalai Lama was forced to flee with thousands of refugees to India ten years later, lamas traveled to the United States and began setting up schools. During the late 1960s, another cultural revolution took place in America in the wake of the Viet Nam war. Young people wanted meaning in their lives and looked to eastern practices for answers to questions about the meaning of life. Whidbey Island is fortunate to have this center that celebrates the earth and its beauty, is a place for retreats and serenity, and offers weekly meditations.