A young man of few words and great insights 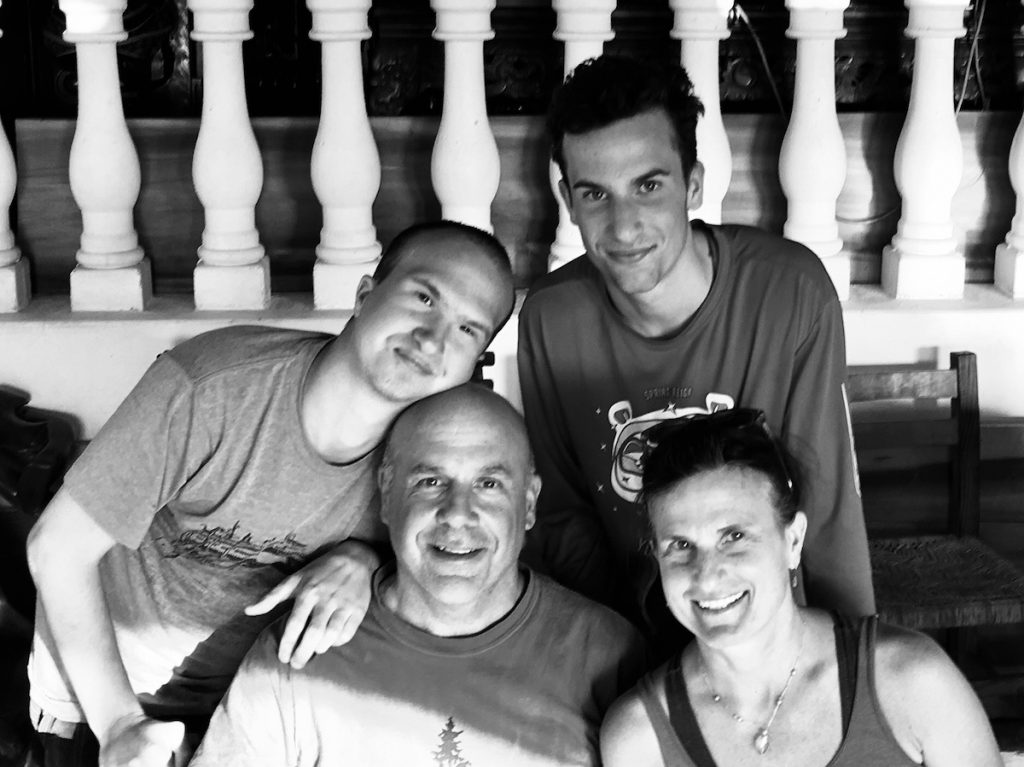 Even though he doesn’t say a whole lot, Dylan Aposhyan knows what is important and true.

The 22-year-old young man currently lives with his parents Sarah Manchester and Howard Aposhyan, along with his younger brother Drew, in Langley. Dylan and his mom Sarah met up for coffee at the Whidbey Commons this week to chat for this story. Dylan brought along introductory badges he wears when riding the ferry.

Now that he’s out of school, Dylan works with a couple of job coaches through Lake Stevens-based Sherwood Community Services. One of his job coaches owns the Slumber Ease Mattress Factory in Marysville. Weekly Dylan takes the ferry to Mukilteo where he is met by his job coach Kelley Struthers and driven to work. While riding the ferry Dylan wears a badge that reads: “My name is Dylan! I like to mow lawns. I work at Slumber Ease Mattress Factory in Marysville, Pickles Deli and Venture Out. I’m a friendly guy and really like people of all kinds.”

“Dylan is very passionate about the businesses he works at—Pickles Deli and Slumber Ease Mattress Factory,” says Jeremy, an Employment Specialist for Sherwood Community Services, who has worked with Dylan for the past three years. “Dylan and I have a truly wonderful working relationship and friendship. Dylan is not always the most talkative with words but he says a lot with the words he says and the gestures he shows. Dylan is one of the most amazing young men I have the privilege to work with and nothing gives me more pleasure than being able to work with him on Mondays and Wednesdays. Dylan loves to get people to drink water, recycle, he even gives away his Whidbey Ice Cream to others because it is just in him to share and to try to get people to be our best selves. When Dylan goes off island he brings Langley brochures with him and everyone he meets he gives them one and tells them to visit the beautiful Whidbey Island. Dylan has a very beautiful soul and he sees the beauty where I think a lot of people miss it. And in this life, Dylan just wants us all to stop, relax to take a moment, to see the beauty that is all around us.”

I met Dylan in 2004 while working at the Whidbey Island Waldorf School. From that initial meeting I felt such a surge of happiness that I knew I wanted to teach students such as Dylan. That year I enrolled in a special education teaching program at Seattle University. While I met a spectrum of students who taught me to appreciate their own ways of learning, Dylan’s kindness and enthusiasm remains a rare gem in a sea of folks who forget to celebrate life. These many years later, whenever I see Dylan, he’ll expand his arms to invite me to appreciate the vista of the Langley waterfront, encourage me to buy Whidbey Ice Cream or motion for me to hug his mom. He’s one of my favorite people on the island.

Dylan entered the world with challenges to his health.

“When Dylan was born, he couldn’t coordinate the suck, swallow and breath sequence due to a cleft palate and a smaller jaw and mandible,” Sarah explains. “So sucking was difficult for him and because he was not able to get enough nutrition on his own, he had to be fed through a g-tube. Dylan had several surgeries in his first few years of life, so he had a rough go at first, but even as a baby, he was a love sponge, just wanting to spread the positivity. We learned to trust Dylan early on, when at two and a half, he pulled the g-tube out in his sleep one night. By the time we found him in the morning, the site of the tube had closed enough so that he would have had to have another surgery to place it again. We decided that maybe Dylan was telling us that he could eat on his own now, and in fact that’s what happened. Dylan had had a lot of therapy to work on eating in those first couple of years, but once that tube came out, he continued to eat and drink on his own and is still a good eater today.”

One of Dylan’s occupational therapists in Boulder Colorado was aligned with the philosophy of the Waldorf Farm School program. She suggested that such an education might be the right fit for Dylan.

Meanwhile, Howard and Sarah had visited friends on Whidbey a few years before their move and liked our island way of life.

“We had a tour of the Whidbey Island Waldorf School,” Sarah says. “I got this gut response of Oh my gosh what if Dylan could go to this school? We had a few years of talking with the school. Howard was offered a job and we decided to go for it.”

Howard is a psychologist and Sarah is a psychotherapist. The family moved to Whidbey in January 2004 with Dylan and his 18-month old brother Drew.

“It was hard to leave our Colorado family,” Sarah recalls.

Dylan attended Waldorf for a half year of kindergarten, and all of first and second grades (brother Drew graduated from the school and is now attending South Whidbey High School). Then it was apparent the school couldn’t serve his needs and he was enrolled within the South Whidbey School District where he remained until he graduated from high school. One of Dylan’s favorite school memories was created by Deanne Ross and Barb Wornette, then educators who ran a life skills program, Cougar Bakery. Cougars are Langley Middle School’s mascot. With the proceeds earned on bakery sales, Dylan and his classmates were able to enroll in the HOPE therapeutic riding center at Island County Fairgrounds.

One memory Sarah recalls especially when Dylan was eight or nine: “I had to go into the middle school. I asked Dylan to wait outside. When I returned he was gone. The UPS driver Dom said, ‘You looking for Dylan? He’s out looking at the tractor.’ I thought, if I’m in a place where the UPS driver knows my son, I’m in the right place. Even though school was hard, the community has supported us.”

Dylan’s family likes skiing, kayaking and sailing together. Dylan asked his mom to recall this story:

“In 2010, September, we were out on a late fall afternoon. Heading back from Port Susan (on Camano Island). We hit some weird currents and our boat went turtle—upside down. So we were all thrown in the water. We got the boys up on the hull of the boat. Howard thought he could right the boat. But that would mean we would be back in the water, which was too cold. Howard in his calm together state, said, ‘OK, we’re going to hunker down and we can survive this, but it will take a while.’ No boats could see us in the distance. We were too far from shore. I was screaming like a maniac for help, but no one heard us. We spent the night on the flipped boat. The current finally took us in and the mast hit the sand. We swam to shore at 3 in the morning. While we sat on the hull Dylan and Drew were amazing. We watched the moon come up. It rained. We saw bioluminescence. Drew had just read Peter Pan and the Starcatchers. He said, ‘Wow it’s the magic.’ It was uncomfortable. When they would pee the boys would be really warm for a moment. Dylan hung on to one Croc (shoe). He lost the other. When we got to the beach at 3 a.m. we huddled because it was still dark at the south end of Camano Island. When the sun started coming up we started walking. There was a rainbow, Dylan remembers. We walked for three hours. Dylan had found a flipflop so he wore that with his Croc. Then we found a house. This is the best part. Howard had his balaclava on when he knocked on the door. When the man answered, he drew back at first. Howard asked to borrow a cell and explained that we’d had a sailboat accident. The man said, ‘Oh my gosh. I was going to go to church, but I asked God to give me someone to help today.’ And so the couple proceeded to let the boys take a shower. They gave the boys warm clothes. They gave us breakfast. Drew says they were the best crepes ever. Finally the harbormaster from Langley came to get us. Howard and I went back a few days later to retrieve our boat. Someone had righted the boat. It was tied up to shore. We still have it.”

In addition to sailing adventures with his family, Dylan volunteers at Whidbey Ice Cream in Freeland and is paid in ice cream bars, which he hands out to construction crews, bank tellers and others he wishes to promote the company to when he is out and about.

Since high school Dylan has worked with a caregiver, Tony Shults.

“I met Dylan five years ago as a caregiver, and our relationship has since grown to become more of a grandson/grandfather relationship,” Tony wrote in a text message. “Dylan has a joyful perspective on everything he does and with everyone he comes in contact with. His family is supportive of all of his efforts, and they add to his positive direction. His kindness never ceases to impress me, and his sense of humor just makes everyone’s life more delightful. I always look forward to the time we spend together. I am blessed to have him in my life and can only hope that my contribution to his life will be at least a small measure of what he has contributed to mine.”

As he gets older, Dylan’s parents understand his need for greater independence and have bought a lot for his future home at the Upper Langley Cohousing community. Its aim is to create affordable housing and community.

“Dylan is excited about having his own place in the future with a caregiver,” Sarah explains. We have the lot, but have to finance building the house. We’re not in any hurry to have Dylan move there yet. The community has been really good for him. He’s part of it and participates.”

Dylan’s lot is right next door to Cary Peterson’s (the community’s cofounder along with Christy Korrow, who is also a councilwoman for the City of Langley). “Christy is the best Dylan advocate in the community,” Sarah adds.

Collecting some of the trees that were felled to create the community, Dylan transported the wood back to his nearby home. The family rented a splitter and visitors would leave with load of firewood.

Boats, bikes, trains, planes, ferries. Dylan loves all things that move. He bikes regularly to Upper Langley. He hopes someday to work on the ferries. For years, the ferry workers have let Dylan drop the rope when passengers exit. A big dream is to watch Boeing planes being painted.

“One of the best things Dylan has done,” Sarah adds, “is we’ve taken the ferry to the Sounder and ridden down to Seattle and rented bikes and rode around and come back on the Sounder and the ferry. That’s Dylan’s best day. A day like that when I can be relaxed and follow Dylan’s lead. That’s a good day. Dylan doesn’t like to hurry. He’s my constant teacher.“

Close to his Colorado aunts, uncles, cousins and grandparents, Dylan visits Colorado at least twice a year. He’ll fly there next month. When he arrives he’ll be greeted by lots of loving people. He will independent from his nuclear family for a little while.

Then he’ll come back and be here to spread his own style of happiness. Hope you get to meet him.