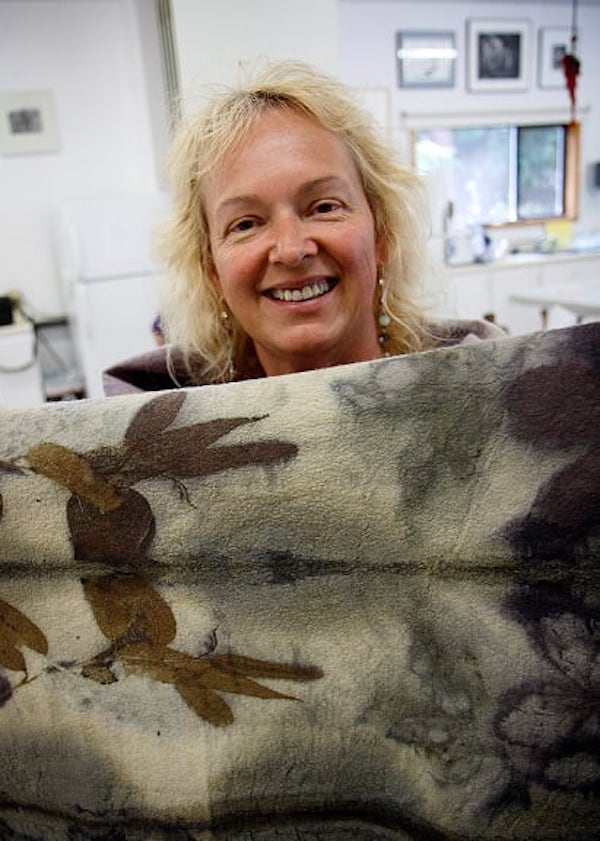 “I want pretty things to wear and I like things that twirl,” she says. “I’ll wear these to the grocery store. Feltmaking can be done in oh so many ways. I use lots of techniques so there is no one method. I like using the patterns of nature. For instance I like using Logwood, a plant dye from South America, which restults in colors from grayish-charcoal to purplish black-blue.”

While she’s taught classes and served on various gallery boards, these days Janet has pulled back some from her formerly busy schedule in order to complete a renovation of the Freeland home she shares with her husband Richard. The couple bought the home in 2015 and spent the past year recreating it to their taste. Finally after a year of renovation, she has had some time back in her studio this week.

“Yesterday I did some eco-printing,” Janet says. I still have the dye is on my fingers,”

Eco-printing involves plants, their natural dyes, and using their shapes to create patterns on fabric. In Janet’s case, she may use eucalyptus leaves and print them on a Nuno felted fleece and silk dress. Her felted and embroidered jackets, hats, pods, sea creatures, jewelry and functional art pieces are such eye candy that I want to wear the clothes and feel as good as they look.

To make her love-to-touch-the-fabric, Janet may alternate layers of colored wool fleece with sheer silk before felting them by hand. After felting, the newly created fabric can be wrapped with plants and immersed in a natural dye bath or a steam bath resulting in a multi-hued pattern of leaves. Alternately, she may use vibrant colors and create a coat with wool and silk flower shapes, and bar-bell buttons made of pure wool felt and strung together with elastic cord. 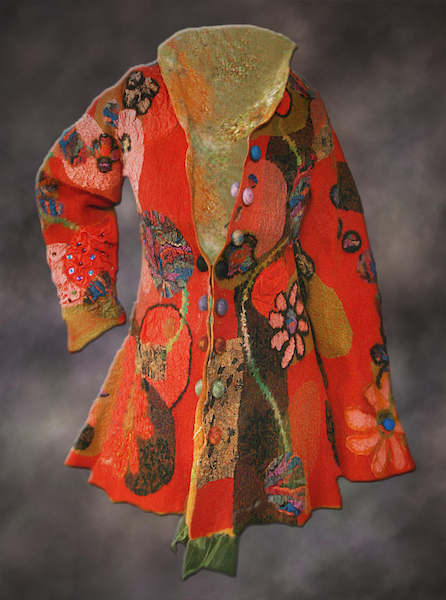 Wildflower jacket made of layers of silk and wool won ‘Best of Show’ in Coupeville. Photo by Richard King

“The coat is called Wildflower, which won best of show in Coupeville,” Janet said. “It is the first time a wearable art piece or fiber person won that award. None have won since then, either. I’m very proud. The wool has come up through the silk, creating ripples. There’s two layers of silk and wool.”

On an attractive cream-colored tunic with an umber eucalyptus leaves print motif, Janet said that she first experimented with the leaves on a sheer silk scarf to determine the color they’d end up printing on the silk and wool fabric. “I like to wear these scarves like the ladies of old, riding in a convertible with their scarves flying,” she says.

She created a water-color wrap, such as the blue and lavender-hued Twirl wrap dress with imprinted fern and leaf silhouettes. 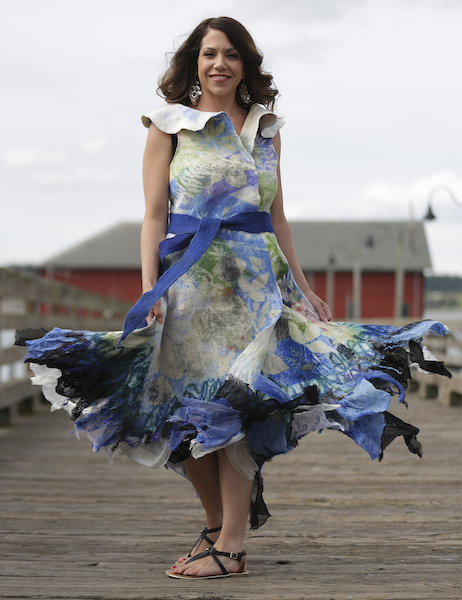 “I made the dress two years ago and used it as inspiration for a class I taught this March, at the Freeland Hall where students used the same method to create a wearable garment of their own,” Janet adds. “The process involves first making the Nuno felt garment–no seams and no sewing!–and then using acid dyes set with vinegar and leaves for botanical prints. When I first made the dress it was featured on the cover of the Pacific Northwest Art School catalogue of classes.”

Janet’s designs include nature-inspired shapes such as sea anemones, pods with slits like gills to show an interior view of a different color peaking through. Some interiors are lit with battery-powered votives to illuminate the complimentary colors. Janet’s natural vessels and sculptures, such as bird houses can hang outside in the weather year-round.

A friend, Cathe Mueller, is an artist and retired interior designer, who helped Janet and Richard with redesigns in the couple’s upstairs with views of Holmes Harbor. Cathe has three of her friend’s felted birdhouse pods adding color to her front yard trees. 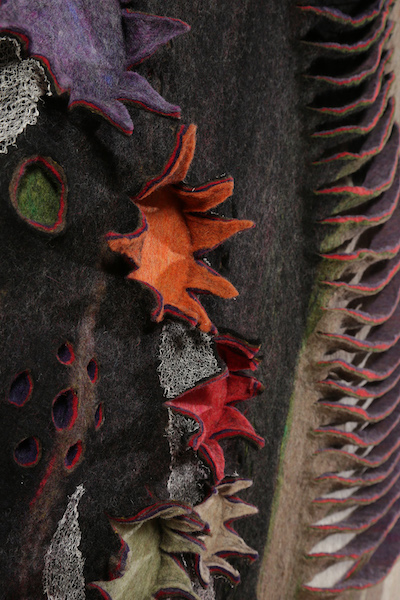 “Janet King is one of the most creative and prolific artists I know who still creates with a child-like freshness,” Cathe says.“

Originally from Bozeman, Montana, Janet was raised with a mom who painted and puttered and crafted. Janet’s grandparents were rock hounds. The fiber artist first earned a degree in elementary school education, which explains her patience in teaching her art.

While living in Las Vegas in 2010, Janet applied for and received a scholarship to the Pacific Northwest Art School.

“It was my first formal class in felt-making,” Janet explains. “After attending classes for the next several years, my husband and I moved to Whidbey in March of 2014 so that I could be closer to the school. I was asked to be the fiber advisor for the school in 2015. Then I became a class assistant as well as an instructor. I just resigned all three positions about four months ago when it seemed that we were never ever going to get our remodel done if I did not cut back on my art responsibilities.”

Nowadays her work is available at the Whidbey Art Gallery in Langley, where she is an officer on the gallery’s board. As a president of the Whidbey Weaver’s Guild, check out her art at the guild’s annual November 1-2 Uncommon Threads Sale at the Coupeville Nordic Hall.

Janet will teach an eco-print and fabric making class this November 8 to 11. For more information or to ask about having an item custom made, contact Janet King at feltflairart@gmail.com 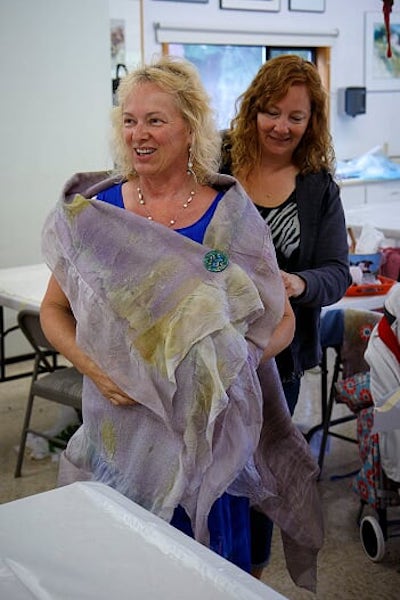 A shawl designed at one of Janet King’s popular fiber art classes. Photo by David Welton 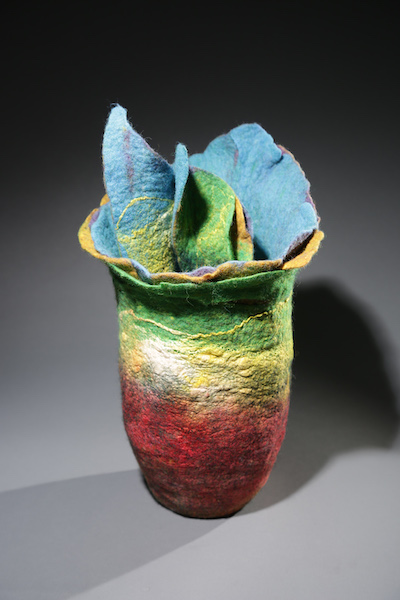