A jewel of a native wildflower prairie in Coupeville is designed to create a lasting legacy and preserve a disappearing habitat in Washington state.

Castilleja levisecta is the Latin name for the rare golden paintbrush, native to Washington State’s prairie.

At the Pacific Rim Institute (PRI) on Parker Road, golden paintbrush, also known as castilleja levisecta, grow in a meadow, along with other native prairie plants such as camas lilies, lupine, buttercup, and chocolate lily. The effect on one’s senses of these rare native yellow paintbrush is to open the heart and soul, creating a powerful wish to protect and preserve their rare kind of beauty.

Federal and state governments have listed the golden paintbrush as a threatened plant species in need of protection. While the plants once grew on prairies from Canada to Oregon, their range has now shrunk by 90 percent to eleven sites in maritime prairies in Washington State and British Columbia, along with a re-introduction of the plant in Oregon’s Willamette Valley. The prairie land they grow in is also rare, comprising less than three percent of Washington state’s acreage according to PRI’s webpage.

Why is protecting endangered species important? The Environmental Protection Agency webpage states: “Can you imagine walking in the woods without hearing birds singing, or picture what a field would be like without wildflowers blooming? Our plants and wildlife make the world a more interesting and beautiful place. More importantly, all living species, including people, depend on other species for survival. For example, if a fish such as the shortnose sturgeon becomes extinct, all of the species that rely on it will also suffer and may become threatened or endangered.” 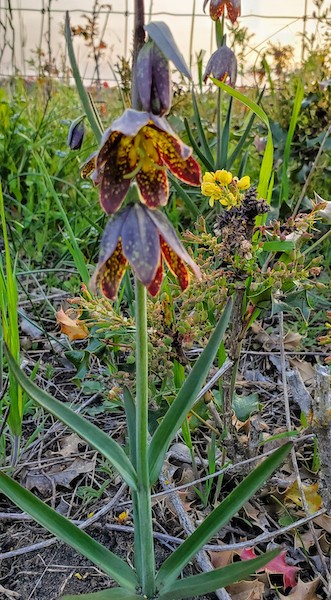 “One of the scariest things is there are ecosystems disappearing,” said Mosa Neis operations manager at Pacific Rim Institute. “How that effects us, we don’t know yet. The golden paintbrush hosts the Taylor’s Checkerspot Butterfly (which feeds on the plant’s nectar). We are restoring an endangered habitat.”

Mosa Neis, grew up on South Whidbey and went to work on the mainland before returning to our island, the place she loves. Her name was chosen by her parents who so admired the work of photographer Edward Curtis, especially his 1904 portrait of Mosa, a Mojave Native American woman, that they gave the name to their daughter. She said she is thrilled to be working at PRI and walking among the wildflower prairie flowers each day.

“Something about the open prairie…I can breathe here,” Neis said, recalling her busy life while working in Kirkland. “I walk out every night and I get to know the land. Get in it. On it. Listening to it. It makes you feel alive.”

Experts have worked for years to create a prescription for preserving wildflower prairies such as this one, which includes prescriptive burns, mowing, removal of invasive plants, and fencing to keep deer out. State and national agencies provide funds that allow Pacific Rim Institute to act as stewards for protection of this land included in the Ebey’s Landing National Historical Reserve. 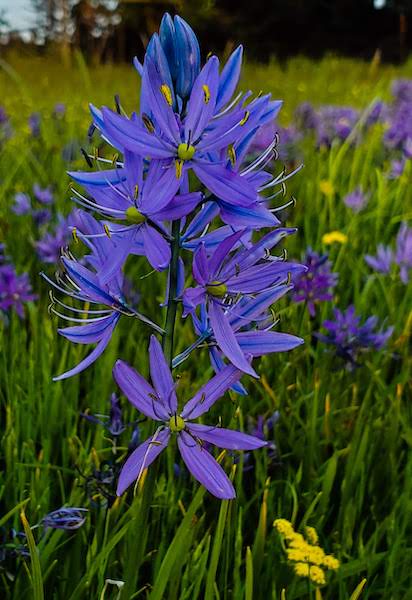 Camas lilies are part of the asparagus family and were a food staple for early Native Americans on Whidbey Island. Photo courtesy of Mosa Neis

“There are some great ecologists who have been doing this for years,” Neis added. “They are starting to retire and passing their knowledge to us. We have partnerships with the U.S. Fish and Wildlife Service, U.S. Dept. of Agriculture, Washington State Department of Transportation, and the National Park Service. The meadow was burned two years ago when there were no native plants. With the spring, the native seed banks were waiting in the ground for years and years. Native plants are amazing. You give them an opportunity and keep the invasive plants away.”

Starting out with 100 plants, the prairie now has 20,000 plants. They are nearing the end of their peak bloom, so now is the time to see them. Volunteers collect seeds in the fall to create a seed bank to increase the plant’s viability.

The sweet purity of this native wildflower prairie is all the more compelling in the face of the Navy Growler planes which practice landing and takeoff in nearby Outlying Field and have for years. The contrast between preserving a quiet place of contemplation and roaring jet engines will be even greater if the Navy expands its flights to 24,000+ a year, up from the 6,000+ flights a year nowadays. For more information visit the Sound Defense Alliance webpage.

While PRI is restoring the prairie to its best ability, it also works with a young man who raises sheep, which manage the non-native plants and add to the nutrition of prairie soil. 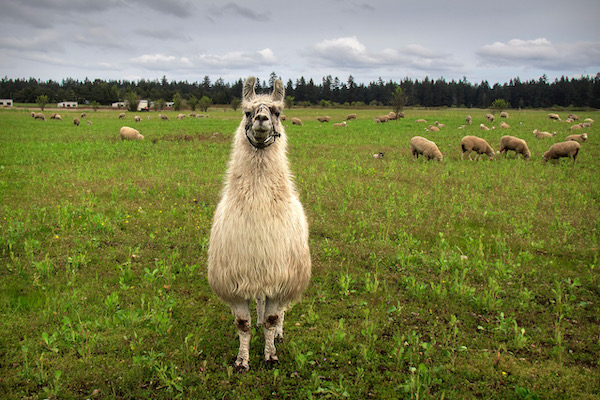 One of Elijah Iles’ guard llamas for his flock.

Elijah Iles, owner of Green Isle farms, is a young man in his twenties with clear blue eyes and a love of the land. He is a sheep farmer whose flocks graze all over the island. Pacific Rim Institute, where the golden paintbrush grow is his home pasture. His sheep are sold for meat at the Greenbank Store Pantry & Deli. Chef Vincent Nattress of Orchard Kitchen uses the lamb for his menus.

“I planted fancy grass there…legumes for protein,” he said.

To avoid overgrazing, Iles moved his flock of 200+ ewes and lambs to the Organic Farm School in Maxwelton Valley, the flock’s summer home.

“I just got here yesterday,” he said. “I have a big pick up and stock trailer. I have a quad and my dog Juniper, a border collie. I have properties that allow my sheep to graze all over the island.”

There’s also Sandy Joe and Crazy Tim, a pair of llamas whose job it is to protect the flock from coyotes and dogs. They are not so interested in humans, but in watching over  their flock.

“Llamas have their own idea about the world,”Iles said. They’re here to protect the sheep.”

Raelani, Iles’ partner and a manager at the Organic Farm School, connected Iles to Robert Pelant, a veterinarian who is the CEO of Pacific Rim Institute.

“Robert’s a great guy,” Iles added. “Everyone there is. Our ideas fit. They don’t have the resources to put all of their acreage into native plants. Instead of invasive plants coming in, I can build the soil with cover crops and manure.”

On the beautiful spring morning watching the Coopworth breed of white ewes and their babies in the meadow, with one young black sheep amohg the flock, Iles climbed over the electric fence and picked up a newborn girl lamb which he placed in my arms. Nuzzling her sweet wool added to the sense of connection to land and animals that is a big part of Whidbey’s psyche.

“It’s satisfying to watch things grow,” Iles said. “The interaction with sheep and the land, everyone benefits. I’m very lucky.”

Iles is looking for other pastures to graze his sheep in. Ten acres or more are needed to comfortably hold his flock. Contact Iles at iles.elijah@gmail.com.

This wildfire meadow preserves a legacy of Washington State prairie that has dwindled by over 97 percent. –photo courtesy of Mosa Neis