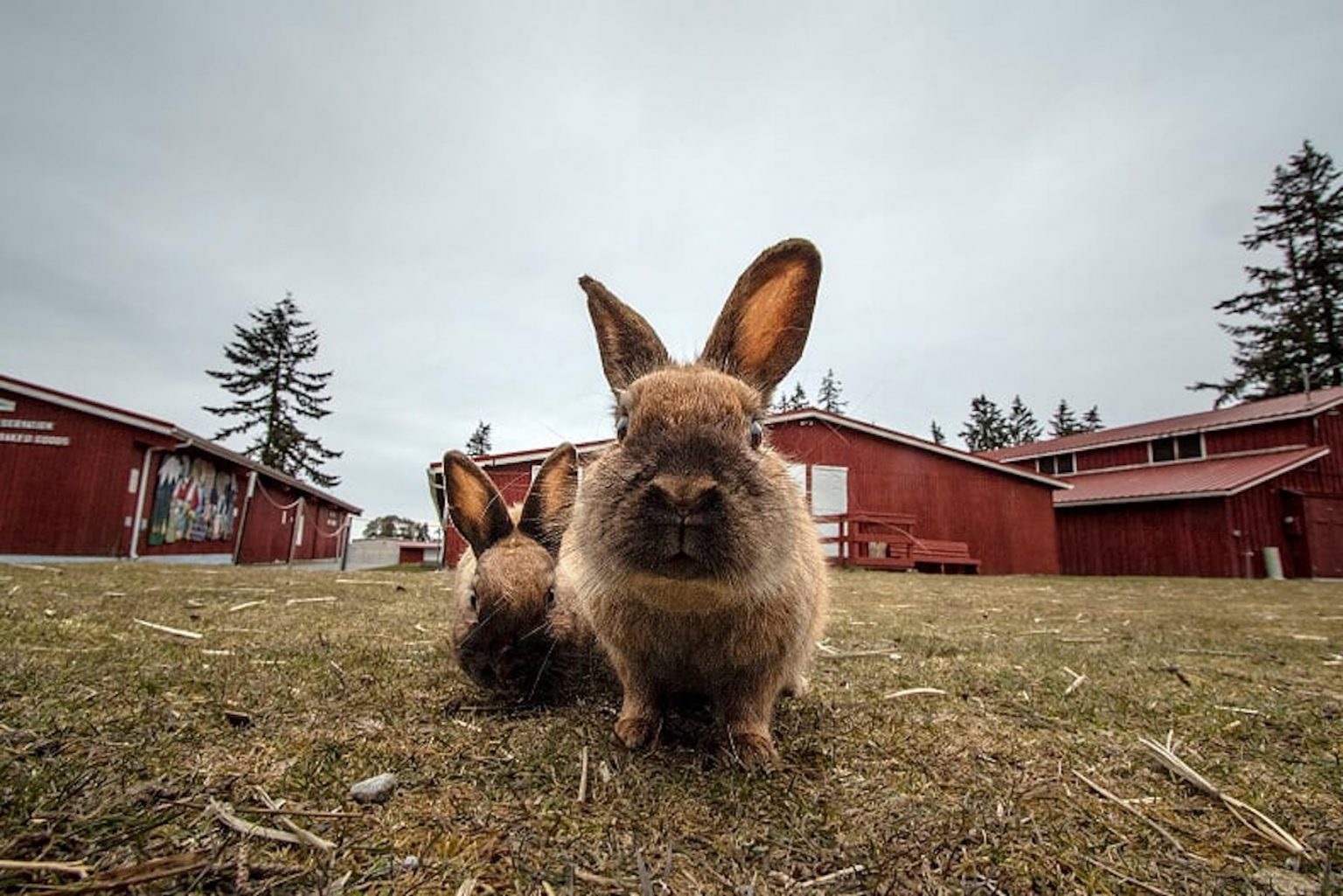 A pair of golden fair bunnies are descendants from the barnyard scramble at the fairgrounds nearly two decades ago.

It’s spring. And Whidbey’s humans celebrated with egg hunts and the bunnies celebrated by being prolific.

Decades ago Island County Fair held annual summer barnyard scrambles each summer releasing baby chicks and rabbits for children to catch, take home and adopt. The practice was discontinued in 2001. Generations of never-caught fair bunny descendants have since become one of Langley’s icons.

Black, white, gray, golden, Himalayan, lop-earred, multi-colored—members of the Leporidae order–hop and munch around our Village by the Sea. The Leporidae family represents 60 species of rabbits, hares and pikas and the word is derived from its Latin origin meaning “those resembling Lepus,” Latin for hare.

Langley’s bunnies have their own Facebook Page. Four years ago they were called a plague by NBC. Viewing them as taking over the city, Seattle Times wrote a story about a Bunny Brouhaha. Tourists post videos calling them a cute bunny plague.  Langley’s Mystery Weekend pitted would-be rabbit stew makers with save-the-rabbit devotees in ‘Much Ado about Murder: A Hare-Raising Tale’ in 2016. Robbie Cribbs of Soundtrap Studios has made two videos: The Rabbits of Langley and Street Talk about the Rabbits of Langley. In the latter, folks weigh in with a spectrum of opinion from building a Roman gladiator arena to view coyotes and falcons versus the rabbits at the fairgrounds; to giving them contraceptives and building a bunny sanctuary.

The reality is our South Island village has a lot of bunnies and as many opinions about them as there are rabbits. “They are thriving,” says Langley’s mayor Tim Callison.

Joe Wierzbowski, a conscientious Langley public works employee who works amid the rabbits each Monday through Friday, says: “The ever enigmatic rabbits are a constant companion to us as we travel around the town doing our jobs, although on the downside they burrow into every garden, and roadside, if they weren’t here, we would loose one of those things that make Langley, Langley.”

The state has published a document with rabbit facts on how best to live with our long-eared, jumpy brothers and sisters: Living with wildlife fact sheet by Washington Department of Fish and Wildlife. The document notes that Eastern cottontails, our island’s wild rabbits, were introduced to the state in 1930s as a game animal. The cottontail is noted for remaining motionless to avoid notice when it senses danger. The rabbit, which swims well, also evades enemies by plunging into lakes or streams. In reading the WSDFW document we learn that rabbits eat their soft pellets as a digestive. Males are bucks and females are does. Rabbit romance season is open from February through late summer. Does are pregnant 30 days and give birth to four to eight kits several times a year.

According to online encyclopedia resources, including Science Kids, rabbits were domesticated since the Middle Ages for meat and fur.

Rabbit babies are born naked and blind and live in underground colonies. Hares are larger than a rabbit, are born with hair and open eyes and have longer ears and differently shaped skulls than rabbits do. The animals live throughout the world with more than half the world’s population in North America.

Rabbits reach sexual maturity in about six months, and have a life span of about ten years. These animals, which weigh from about 2 to 11 pounds, and attain a length of about 12 to 24 inches, feed mainly on herbs, grass, tree bark, fruit, and vegetables.

Langley’s bunnies breed to generate smiles and words like: “Awe, aren’t they cute,” from tourists and chop-licking longing expressions from dogs on leashes.