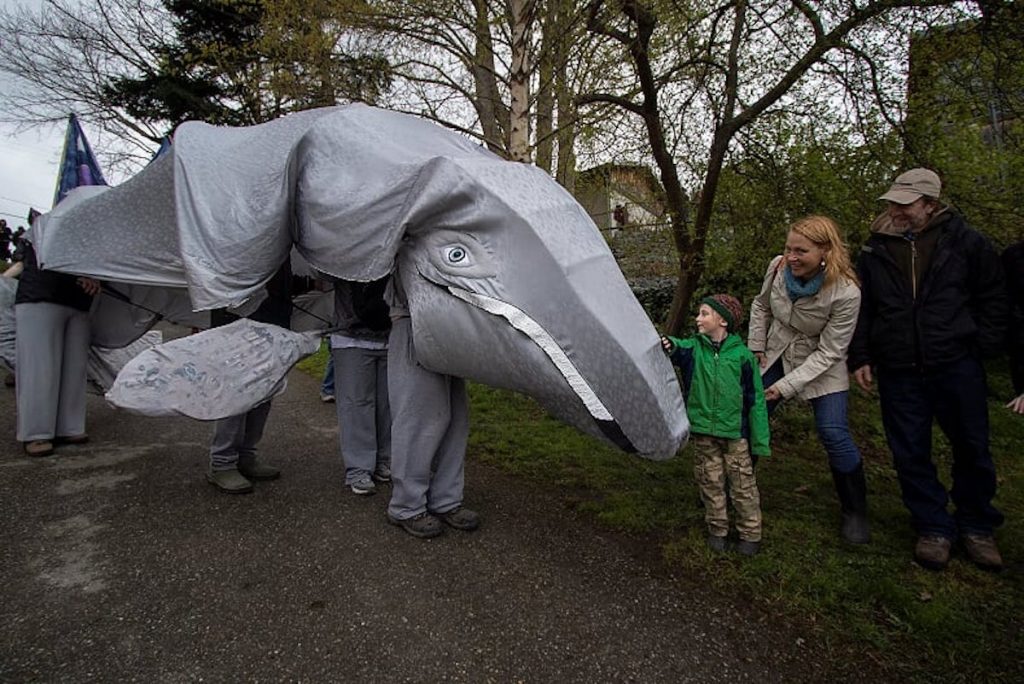 Welcoming the Whales with a people-powered hand-made whale

Though it was gray and drizzly weather, folks came out in bright colors to welcome the returning Gray whales on April 13.

The 16th annual parade hosted by the Orca Network and Langley Chamber of Commerce is emceed by the island’s Conductor of Fun Jim Freeman, dressed in layers this year to ward off the chill damp. Freeman’s colorful costumes are notable.

“I have a no-repeat rule, particularly when last year’s garment is wrinkled and it is as cold as it was Saturday with that gray whale wind,” Freeman wrote in an email following the parade. Last year’s garment was a rainbow-print suit jacket that lives in Freeman’s closet. “The ghost shrimp were excited. However, I did wear a genuine Aladdin Circus jacket over several layers, including a fish-themed scrub nurse’s top to honor the metafishicals.”

Along the Langley Village by the Sea’s waterfront park is a bell that folks ring when sighting a whale or whales. It’s fun to listen for the telltale sound of ‘Foof,’ or see an inverted triangle of spray, whale out-breath, which smells fishy if you’re close enough. About a dozen or so migrating whales return each spring to snack on ghost shrimp, which are scooped up by one of the great mammal’s fins turning on its side. At low tide, one can see the hollowed out craters in the tide flats made by foraging whales.

Since I wasn’t there, to cover it, I’ll leave it to Susan Berta of the Orca Network to tell you about our popular marine mammals who grow to nearly 50 feet long and weigh up to 36 tons. Berta tells it well in this excellent document that she emailed to me:

“The small population of Gray whales known as the North Puget ‘Sounders’ return each year to feast on ghost shrimp in the tidal flats primarily around Whidbey, Camano, and Hat/Gedney Islands, and along Everett and Tulalip. The first Grays usually arrive around early March, but 2018/19 has been an unusual time for these North Puget Sound Grays and some newcomers.

“This small group of Gray whales returns to Saratoga Passage and Possession Sound each spring for their annual three-month feeding foray in North Puget Sound, with the first whales typically arriving mid-February to early-March. Cascadia Research of Olympia has been studying this population of Gray whales for decades. In greater Puget Sound, we see up to 12 of this population of Grays per year, some have been seen every year since 1991. The whales are identified by the markings on the underside of their flukes, as well as by the patterns of barnacles, scars, and markings on their backs. Patch, or #49, was among the first identified by Cascadia in our local waters in 1991 and is a favorite of many local whale watchers, as he is easily identifiable by the large white patch on his right side, as well as white patches on the underside of his flukes.

“Last spring, we had three new whales join our usual dozen local grays – two were previously unknown to Cascadia Research, who has researched these whales since the early 90s, and the other was PCFG185, from the Pacific Coast Feeding Group. New members have joined the North Puget Sound grays before, but this year they not only joined them for the usual spring brunch of ghost shrimp in Possession Sound and Saratoga Passage – they stayed all year. One hasn’t been sighted since November, but two remained in the area during the time of year they normally would have migrated to Baja, and are now again feeding along with the ‘Sounders,’ the first arriving January 11th, six to eight weeks early. So far the following ‘Sounders’ have been sighted and identified in North Puget Sound already this year: #22, 44, 49, 53, 56, 185, 383, 531, and 2246, with several others in the process of being identified.

“John Calambokidis of Cascadia Research shared with us ‘This is certainly an interesting new development this year. I suspect this may say something about prey resources elsewhere (or difficulties there). There have been some changes in both the sightings and strandings of migrating gray whale occurrence elsewhere in Washington State and in the PCFG (Pacific Coast Feeding Group) distribution and numbers in some of their regular areas the last two years as well.’

“Through a collaborative effort, Cascadia Research and Orca Network have published a laminated ID guide of the North Puget Sound Gray whales, to help whale watchers identify the whales they are watching, and to learn more about each individual whale in this unique, small group of Gray whales who are much beloved seasonal visitors. The guide is available for sale from the Langley Whale Center, as well as the Orca Network webshop.

“The annual spring visit of Gray whales provides an excellent opportunity to view whales from the shorelines of Island and Snohomish counties, or from the Mukilteo/Clinton ferries, much to the delight of residents and visitors alike. Orca Network provides a Whale Sighting Viewpoints Map to help watchers find the best locations for viewing whales from shore at our Langley Whale Center.

“Alert to boaters: All boaters in the North Puget Sound area should take extra caution and go slow during the spring Gray whale season (March – early May). Gray whales (and humpbacks) are often difficult to see or predict where they will surface next, so be alert for whales and give them lots of space. For more information and to view responsible whale watching guidelines visit: www.BeWhaleWise.org.

Whale sightings from the public provide important information about the travels of the whales, and timely reports enable Orca Network to alert researchers who can then obtain photo/video identification and samples from the whales during their time in Puget Sound.

Please include the following:

Species (If uncertain please list as such and describe)

Chasing the blues away with a sea float scramble