The Art of Work and Play 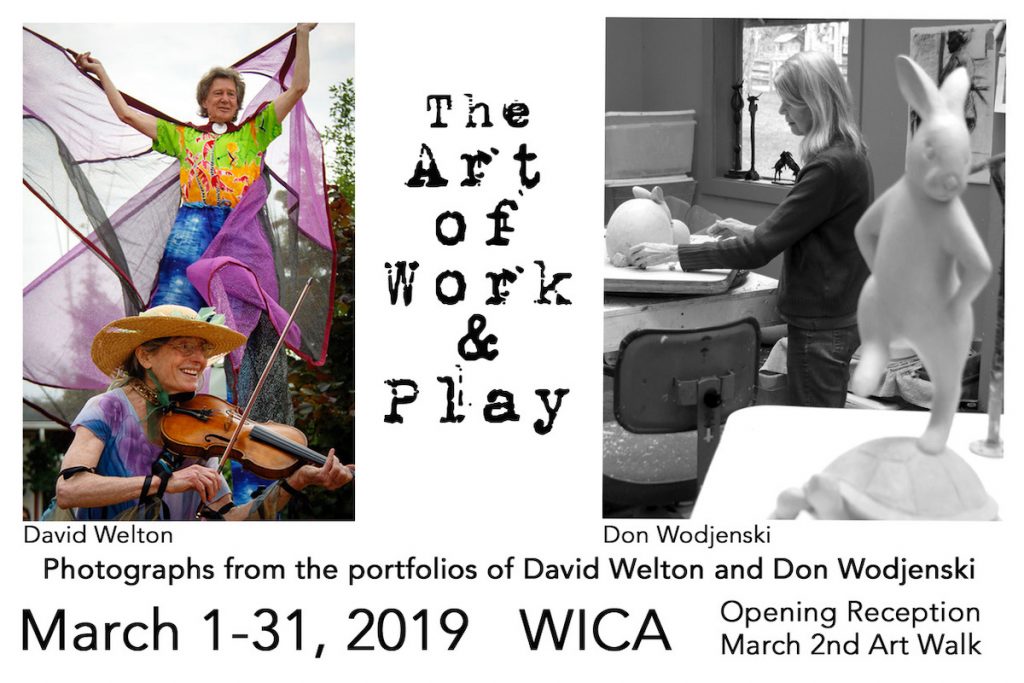 Celebrating the art of life, photographers David Welton and Don Wodjenski invite the public to view their work at Whidbey Island Center for the Arts’ Lasher Gallery during the month of March.

The talented gentlemen host a free open reception Saturday March 2 from 5-7 p.m. For the rest of the month, the exhibition is free for public viewing weekdays from 9 to 5. Their art show runs concurrently with The Local Artist Series, which was created to offer local artists a chance to perform at WICA.

Welton, a retired cardiologist and Wodjenski, a retired high school art teacher, have collaborated in the past. Each of them believe deeply in supporting our vibrant island life.

“I believe we live with a lot of creative people on Whidbey Island and the artistic impulse rubs off and inspires all they connect with, even those who do not think of themselves as artists,” Welton said. “Consequently, I have chosen to display photographs of locals living artfully, dressed in imaginative costumes at parades, festivals or historic re-enactments or just surrounded by beauty. As Helena Bonham [Carter] says, ‘Life is art.’”

One of the challenges for Wodjenski, affectionately known as “Mr. Wodje or “The Wodje” was selecting which photos to use for the art show. He’s got hundreds of them.

“It was hard to choose,” said Wodjenski. “You’ve seen my book (Artists of Whidbey Island, published in 2017 and available for checkout at Sno-Isle Libraries). “ There’s lots of photos of artists working. It was a matter of me choosing the best photograph for its content and composition and the feeling it gave me.”

The photo of  Laura Hudson painting with her baby, “Really makes happy,” he said. Musician Randy Hudson and his wife sculptor Georgia Gerber are Laura’s parents.

“Georgia and Randy…I’ve known them since their daughter was in school and even before that,”Wodjenski added. “We’re old friends and acquaintances.”

This story’s featured banner photo announcing the art exhibit shows Georgia Gerber with rabbit models being made ready for bronze casting (a couple of her bronze rabbits are at the Clinton Library). The other photo shows Langley’s former stilt man Larry Dobbs (he now lives in Mexico) accompanied by Talia Toni Marcus on violin. This photo was taken by Welton.

“I have been a photographer since the age of eight,” Welton said.  “My photography skills were enhanced with the availability of a darkroom in college, and even in medical school and post-graduate training I had space in my home for an enlarger for black and white printing. Working in the darkroom and exercising the right side of my brain provided respite from the rigors of an interventional cardiology practice, but a printing session was frequently interrupted by emergencies, and trays of chemicals were often left untouched. Digital photography replaced that almost twenty years ago and there has been no more disruptions.”

Welton notes that his grandmother’s Sunday after-dinner travel slide shows, and her gift of a Kodak Starflash camera for his eighth birthday first fired his love of photography. “Although my career path was medicine, I never turned away from the photographic arts and I have made it my mission to document life on my beloved Whidbey Island, as experienced in the first years of the 21st Century.”

As an art teacher at South Whidbey High School for 20 years, Wodjenski inspired hundreds of students to create. Students still recall him fondly and tell him so when they run into him playing sax with his buddy Dr. Bob Wagner, a pediatrician for many of the South Island’s children. Wodje modestly says he encouraged his students when other grownups might have criticized their budding work.

“As to the title of our WICA show, ‘work’ and ‘play’ are often interchangeable,” Wodjenski said. “We work hard and play hard. Although some would say work is compulsory and play is superfluous, I contend that it’s how you approach either that determines outcomes and defines the individual. The Art of Work and Play portrays creative individuals whose approach to production and/or performance is an expression of their true selves. Who could ask more from art, work, or play?”

To view a sample of Wodjenski’s work visit his website.

Welton, whose work has graced the Seatac Airport Shuttle, has taken hundreds of photos that give faces and places to our Whidbey Island. His work highlights the stories in This is Whidbey as well.

“I think everything in life is art,” Welton said, reflecting his quote from Helena Bonham Carter. “What you do. How you dress. The way you love someone, and how you talk. Your smile and your personality. What you believe in, and all your dreams. The way you drink your tea. How you decorate your home. Or party. Your grocery list. The food you make. How your writing looks. And the way you feel.”