Prayerbody on a Sunday morning 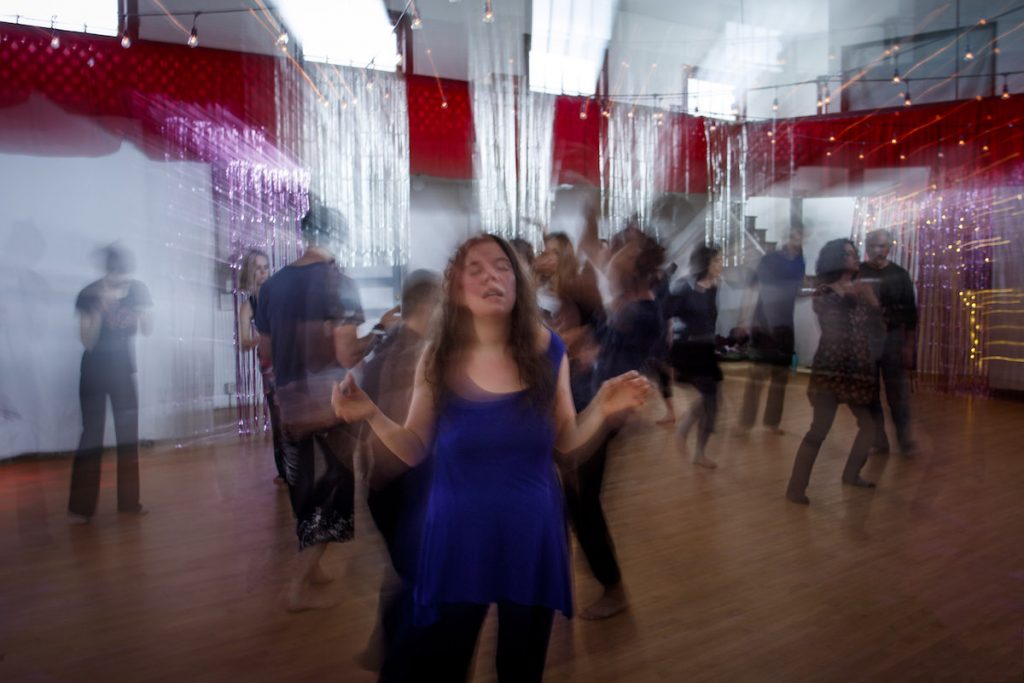 Feeling ecstatic while dancing at Prayerbody.

From 10 till noon at Bayview Hall folks of many stripes gather to free their bodies, hearts, and minds as musicians take dancers through a Wave, a series of musical moods comprising the 5Rhythms©: Flowing, Staccato, Chaos, Lyrical, and Stillness.

Tasseff’s friend and mentor Gabrielle Roth, introduced the concept of the Wave and 5Rhythms in her book, Maps to Ecstasy: The Healing Power of Movement. Gabrielle Roth was a theater director and recording artist, as well as a movement teacher at Esalon in Big Sur during the 1960s. She died in October 2012.

“I’ve always felt like a cartographer, obsessed with geography of inner space,” Roth writes in the Author’s Preface of her book. “Indeed, one reason I started dancing was to explore my uncharted interior territory. Eventually I discovered the markers I used as guideposts on these inner quests were not specific just to me–they were universal.”

Roth’s way of mapping this inner space was through studying the various waves humans experience, much like the waves of the sea.

“My way back into life was ecstatic dance,” Roth wrote. “I reentered my body by learning to move my self, to dance my own dance from the inside out, not the outside in. And over the years, I discovered — in observing my own body and thousands of others–the five sacred rhythms that are the essence of body in motion, the body alive.”

Tasseff trained with Roth for about ten years and then was invited to do teacher training. “Gabrielle is the mother of the practice of 5Rhythms©,” she said. “It spoke to me and got me through a separation and divorce. Now I’ve been doing this about 20 years. I took some time off when Gabrielle died. When she did, a part of me died and I realized later, I didn’t have the life I did when I was dancing.”

Three years ago Tasseff started Sunday Prayerbody at Bayview Hall, reigniting her own spirit  and reuniting with musicians she knew who understood how to play waves. “I thought I’d give it a year of Sundays and thought maybe a dozen or so would show up. That first time we had more than 24. Since then we’ve never had less than 20 or 30 here.”

Last Sunday’s gathering saw at least 50 dancers moving to the beat. One dancer said she was concerned that writing about Prayerbody will make the dance floor too crowded. But Tasseff saw more people having this experience as a blessing  and said she’d host an afternoon dance if more people want to come.

Part of what makes the experience so powerful is the band, called Heartsweat. Comprised of Rachman Ross, Nick Toombs, Ashley Eriksson, Eli Moore as a guest musician, and Joseph Sanchez, their improvised music builds and swells like a wave and invites the body to move to it. The musicians’ skill and knowledge of creating the moods for flowing, staccato, chaos, lyrical, and stillness in dance is mind-bending if you think about it. Posts of Prayerbody music are available through Instagram at Heartsweatband.

“I’ve worked with Joseph and Rachman over 20 years,” Tasseff said. “The musicians have formed a community. I know what the music does and how important it is to keep on doing this.This is my passion. This is my art.”

Joseph Sanchez said the rhythms of sacred music are embedded in his DNA. He plays congas, an Afro-Cuban beaded percussion instrument called a skeker, and the didgeridoo. He and his Heartsweat bandmates also play sacred music at OmCulture in Seattle.

“I love the connection between the drummers and the dancers,” he said. “We play for everybody–moms and newborns, seniors. I’ve watched seniors who couldn’t move get down to the drums. You get to witness their transformation. We usually play four to five waves. I like when Christine teaches. She might call out ‘chaos’ and we know what to play. Usually at the end I walk around  with the didg(eridoo) and play to the people lying on the floor.”

Carie Elder, owner of Whidbey Wonders and community liaison for Bayview Community Hall, often takes time out of her busy life to dance at Sunday Prayerbody. You can’t miss her with her pink dreads flying free as she grooves to the music.

“It has changed the way I look I look at my community,” Elder said.

Elder’s support of Prayerbody helped launch its popularity, Tasseff said. “She works tirelessly. She even washes the floor each Sunday so we’ll have a clean floor to dance on.”

“Moving at Prayerbody is a fantastic way to MOVE my life experiences through me,” Miller wrote in an email. “I don’t have to know what is moving through me. I just move in ways that feel good. I move in habitual ways. I move in spontaneous, creative and new ways. I move with the music. I move in contrast to the music. I love that I can have my own experience. If I want to dance alone, I dance alone. I can go deep within partnering with the music, moving in whatever ways I feel called to move. I can also open and connect with others. The live improvisation music is fantastic and such a gift.The musicians riff off the dancers. The dancers riff off the music. And, sometimes the music drives the dance. How many places do we have where we can creatively express ourselves through movement? Prayerbody is such a gem! And Christine. Sometimes, at some point in the dance she will invite the group through a guided movement practice. Anytime I manage to explore beyond the boundaries of the habitual, inspiration, freedom and new possibilities are available to me. I’m so grateful for Christine’s mastery in inviting us to explore beyond our habitual movement.  I’m so happy so many people are fed by it and it is going strong. I have gone there when I’m happy and open to connecting with the world. I’ve gone there when my heart was broken and wept through most of the dance. I love that there’s a place to dance regardless of one’s mood. I love the complexity of the improvised music, it allows for more choice and variety in movement. I love the closing circle where folks speak their insights and appreciations and name whatever heaviness they might be carrying.”

Vicki Robin, a local author and social innovator, is a regular at Sunday Prayerbody. “I’ve been coming to these for 14 years,” she said, looking refreshed and relaxed. “It’s about love and connection. You’re here with your hairdresser, your architect. All the forces at play in my life are integrated on the floor, whether it’s interior; the stress and hope of the world. I surrender to being, carried by these five rhythms of life. You surrender and it’s a miracle you resolve it. You bow down to all the gods and you’re free. Finally still.”

Tasseff said she feels she found her tribe with Prayerbody.

“The tribal aspect is that we are there for each other. In a typical closing the palatable silence moves me. It’s rare to be in that silence and look into each others’ eyes. People leave in a lighter state.”

It’s true. Folks come up to Tasseff, smiling warmly and hugging her at the end. Then they’re ready for the week to come.