While Langley’s fat golden bunnies huddle outside in the winter sun, nine humans make their way to the Island Fairgrounds to warm up at Vibrant Fitness. Housed in the Agricultural Exhibits building, the long whitewashed workout room hums with good juju and hard working bodies.

“Many of the exercises that we do are like medicine,” said Adam Fawcett, the creator of Vibrant Fitness. “They prevent and reverse prevalent dysfunctions like old man curl (excessive thoracic kyphosis) and vanishing old man butt syndrome (loss of muscle mass in the gluteals/buttocks).”

Working out to prevent getting hunchy or losing one’s backside to gravity, Fawcett is passionate about maintaining the body’s functionality and core strength. He has refined the practice of functional strength workouts for nearly a decade and has spent the last four years training others at the fairgrounds site. 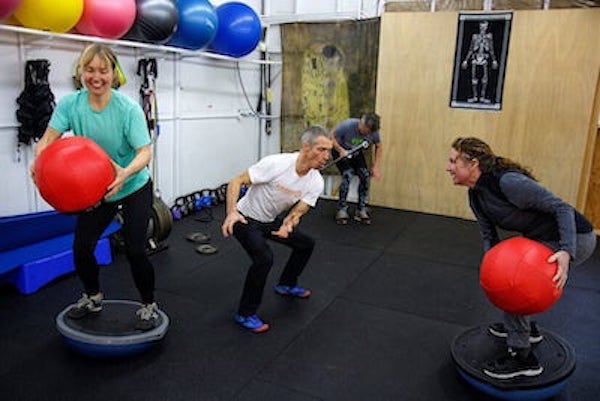 Emi Gunn, left, and Marybeth Shirley have a laugh with Fawcett while balancing and twisting on half-circle workout balls.

On a Thursday morning in late January, Fawcett set up for an intermediate skills group with six stations. Some involve weights and pulleys. One involves shaking a pair of ‘battle ropes’ that look like long flat fire hoses. Another requires balance and concentration: jumping onto a flat surface of a (Bosu) ball while balancing and rotating side to side with an 8-pound medicine ball. “Leap if you’re super cool,” Fawcett says, showing how to hop onto the flat surface that rocks back and forth. “Get your cardio jam on and end up in a squat when you leap off.” 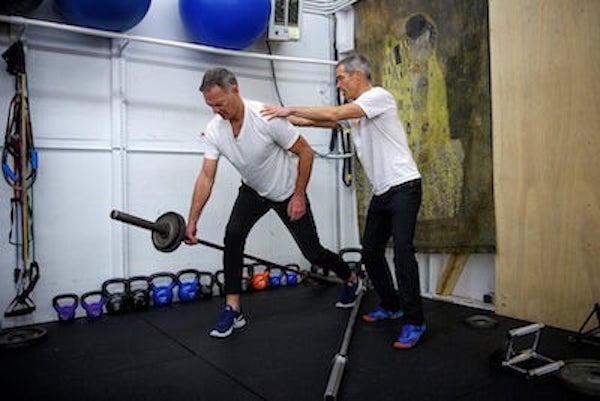 Sometimes working in pairs, sometimes singly, men and women turned, lifted, shook and bent to workout music in 60-second intervals with 20 second rest periods in between.

“That whole six-station circuit format was created by me seven years ago, and it works very well,” Fawcett said. “I vary it sometimes, but that is the basic template structure of my small group training sessions.”

At a corner exercise station, Brian Palmer, a retired heavy equipment operator, lifted weights suspended from a long pole. Observing the effort it took him, the minute-long exercise looked like hard work.

“I’ve been coming here for about a year now, and Adam does a good job of getting you going,” Palmer said. “This is a fun bunch of people. You gotta’ talk yourself into coming in [some mornings]  and feel better afterwards. This helps me when I standup paddle.”

Vibrant himself, Fawcett runs back and forth, checking on his peeps, and with good humor, models how to rotate and hold one’s body to prevent injury and maximize strength and flexibility. 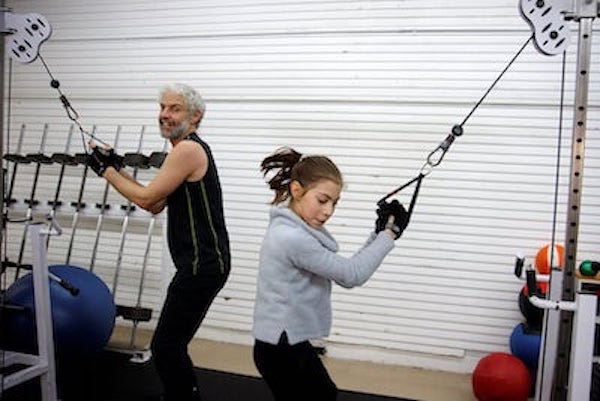 Acupuncturist Tim Batiste says his days are better when he work out. Daughter Yarrow accompanies him.

Working out twice a week, sometimes with his 11-year-old daughter Yarrow, Tim Batiste, a Langley acupuncture practitioner, said he’s been coming in for years. “I have a better day when I work out here,” he said. “It maintains my strength and flexibility.

Fawcett easily cajoles folks into doing hard work. He checks on Julie Pigott, who is posed in a “V,” and supported by a stretchy strap that makes it easier to do alternating pushups and hip stretches. “Come on, Julie, this is you,” Fawcett says getting down to demonstrate the pose. “It looks cooler and is safer this way.”

“I call it vibrant aging,” said Pigott who works out regularly with her husband Ben Thomas. “I just rounded 61 and I want to age backward, not forward. I’m happier working out here.” 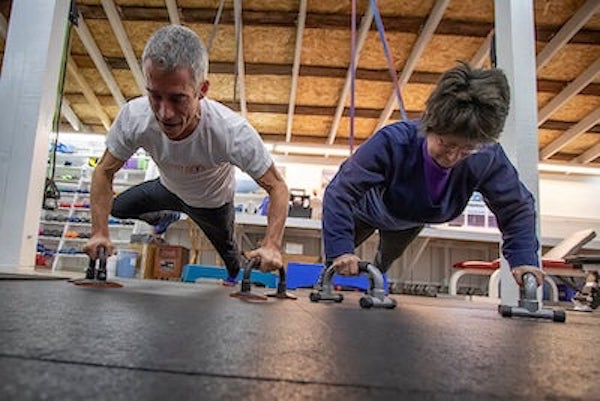 Julie Pigott, right, learns the ‘cool way’ to do a spiderman  pushup, the hardest pushup Fawcett trains. She says this is ‘vibrant aging.’

“Maintaining strength, muscle mass, and the ability to move your body well under load, extends the quality of your life better than anything else in the world,” Fawcett said. He got into the practice years ago following back pain resulting from a skiing accident. He was amazed at the skills he learned when he healed up and knew he was on to something he wanted to share with others. He still skis regularly with his teenage sons. He is hooked on the benefits of functional fitness and shares his enthusiasm by saying: “It allows you to do the things that you love to do in life, from walking and climbing mountains, to having sex, and even taking care of your own hygiene needs.”

On a counter lies a book, Strength Training Anatomy, that is dog-eared and obviously much consulted. Illustrations show how muscles perform during strength-training exercise. Fawcett takes the ideas and puts them into teaching others to maximize their body’s well-being. “A small amount of muscle soreness in the days after a workout feels quite marvelous and alive,” Fawcett said. “I like to say that that is the feeling of not losing muscle mass!” 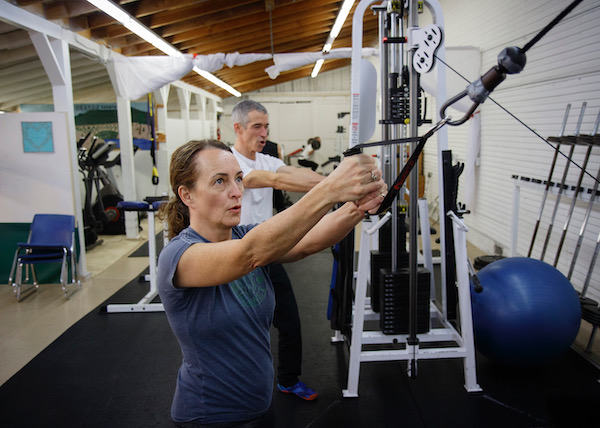 “He beats us up good,” said Mari Campbell a local landscaper. “And this is not to scare anyone away.”

A retired Harborview nurse, Berit Bardarson says, “This is the best thing I’ve ever done.”

Besides workouts and personal training at the fairgrounds site, Fawcett has provided industrial athlete training to employees at Nichols Brothers Boat Builders in Freeland for the past five years and consults with other organizations as well. “We’ve been able to reduce sprain and strain injuries by over 50 percent,” Fawcett said.

Kevin Corrigan, director of Human Resources at Nichols Brothers Boat Builders, said that Fawcett has even inspired employees to make their beds in the morning. “He’s been coming to lead all of our employees in morning workouts. We have 250-plus employees. I’d say he’s passionate, dedicated and vigilant to make sure we as an employer gets its bang for the buck in our investment. In addition to working with the large groups, I appreciate Adam’s approachability to adapt an exercise or program for anyone with specific challenges or limitations in a way that enables full participation and a more personalized and effective result for the individual. He encourages people to think of their 70-year-old self and do the work now to avoid the common ailments that come with age. He makes people believe it works.” 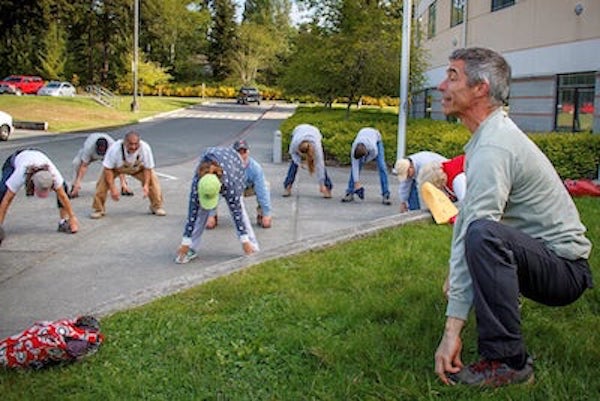 A shot from 2015 with Fawcett meeting with Hearts + Hammers volunteers before they head out for a day of making repairs for local community.

“ I do what I do because I consistently see the profound positive impact it has on people.  And because it makes  me feel alive,” Fawcett said. Check out cultivating your own vibrancy at Vibrant Fitness.