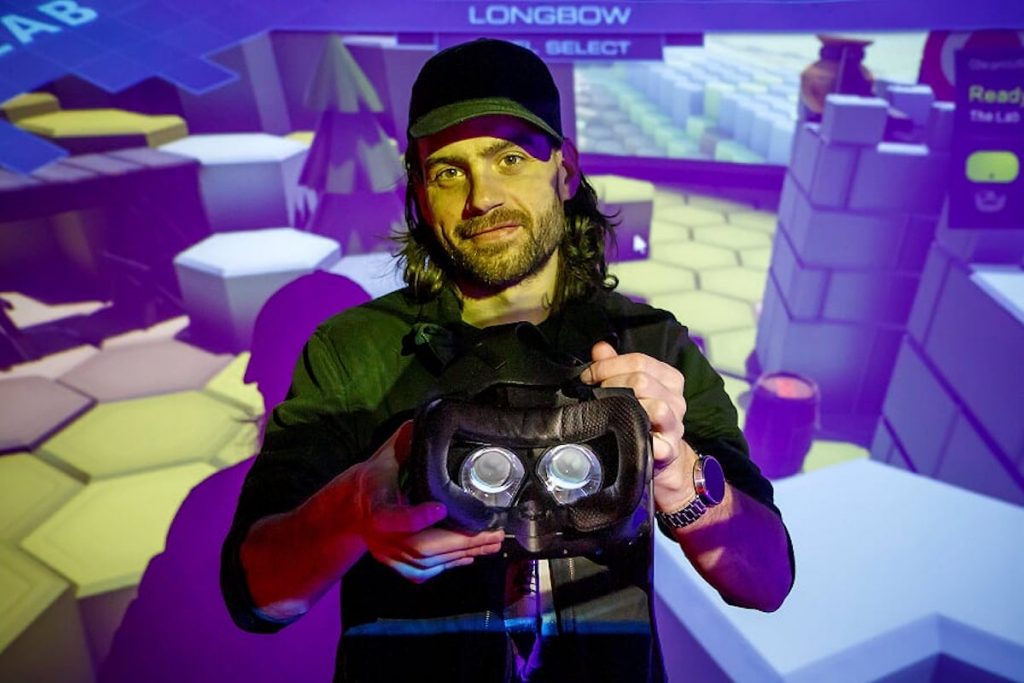 Ethan Worthington takes you into a whole new world at Holodeck Virtual Reality in Langley.

The lunar eclipse aired January 20th and its show inspired genuine awe as the Earth’s shadow covered the moon and turned it reddish brown. Reality can’t get any better, right?

At Ethan Worthington’s Holodeck Virtual Reality lounge in Langley, one may visit Mars and hang out with the Rover, swim with giant jellyfish digitally scaled to look like the real thing, or hone archery skills against attacking hordes.

Daniel Algeo lives nearby and stopped by on a Saturday morning to virtually shoot unlimited arrows at hordes attacking his castle in the VR gameplay, The Lab-Longbow.

“I love it; the level of immersion is so incredibly intense and fun,” Algeo said while using his hand controllers to target his arrow in the darkened padded room. “This game hones my accuracy, timing, planning and decision-making skills. Ethan turned me on to this [virtual reality]  a little over a year ago. I love the educational stuff. I like to play a flight simulator program to test myself.”

Algeo worked for years in flight engineering with the FAA and is now pursuing a master’s in psychology. VR games present a challenge and escape between his studies. After initially seeking Worthington’s help in upgrading his aging home computer, Algeo learned about VR and had his new tekkie friend install a system at home. With a simulated cockpit and flight controls he’s off and flying. He said he ‘drove’ a car on the Amalfi coast about a month ago, which he described as an incredible experience.

Holodeck Virtual Reality shares space in Tim Leonard’s Machine SHOP arcade on 2nd Street. It’s a fun hangout where folks play pinball, host open mike night and enjoy snacks at the cafe. A couple of years ago Worthington invited Leonard to check VR out and from then on, it’s been a part of the arcade.

“One thing I am impressed by with Ethan is his ability to make everyone comfortable with this new and growing technology,” Leonard said. “Young and old—once he gets them in the headset (some are reluctant) –I doubt anyone has said, ‘Umm that didn’t do anything for me.’ He is also great at explaining the technology and is truly receptive about where its headed…It’s moving VERY fast. So, if members of this community want to experience the latest! (And some of the oldest—LOL) technology and try to keep up somewhat, then this is the place…There really is not ANYTHING like in this ENTIRE region!!”

Virtual reality is a simulated experience created by computers and its origins date back to the 1960s. The technology is used for flight simulation, surgery instruction, creation of 3D models, and nowadays, is limited only by one’s imagination. Worthington has found his niche as a wizard of this technology.

An Islander most of his life, Worthington in his 30s, said he’s enjoyed the virtual world for as long as he can remember. With experience in 3D modeling, printing and design, and building custom computers, he now brings virtual reality experience to the little seaside village of Langley.

Longbow, which Algeo likes to play, along with Beat Saber, a 2018 virtual reality rhythm game, involving slashing blocks to musical beats, are popular games at Holodeck Virtual Reality. Worthington is a fan of Star Trek and the black room with white grids one sees in the VR headset are inspired by the series’ virtual reality rooms. In Star Trek characters engage in a more highly evolved digital sensory experience set in the 24th Century. Worthington predicts the industry will increase quality of experience over the next decade and beyond. Even now, he says, with games, like Superhot, described online as ‘elegantly brutal,’ the experience is so real one’s reflexes react to the intense imagery of being shot at by bad guys. Time can be controlled or slowed as in the film, The Matrix, so that one can learn how to dodge virtual bullets; if not, experience what it looks like to be shot. It is an all ages parents’ permitted game with a height restriction. Games for those 18 years and older, Worthington says, are in a genre of zombie/horror games. The padded walls he installed cushion players experiencing the fight or flight reflex while immersed in these intense virtual realities.

These days Worthington says couples may come in and work out their tensions through virtual boxing. Families and friends visit the Rec Room, a multi-player experience where they ‘shoot’ paintball guns, visit dungeons, or travel the world—maybe dropping in to visit Egyptian tombs.

Erin O’Connor, a young mom who works at the Machine SHOP, has helped Worthington in the past and is learning the tools of simulated experience. Her four-year-old daughter Ellie Callahan looks forward to when she’s seven or so and the headset fits her, because it’s too big to wear now. “It’s awesome. I love VR,” Erin said.

Worthington licenses the games and programs through STEAM, a VR tracking company in Bellevue. He adds new content and looks forward to sharing new releases.

“Someone mentioned to me there’s no other place where you give all your senses like this,” Worthington said. “The amount of trust people give me (to shape their experience) is immense. My whole life revolves around screens. I get to work with kids and have fun all day long. This is a dream come true job.”

Yet, while Worthington guides hundreds through virtual reality voyages, he remains a regular guy with a beautiful toddler daughter named Rhea, a musical partner named Bekah and her young son Cooper.

“He’s so humble, so nice; that’s what I love about him,” Algeo said. “He’s done so much with computers and the sensory stuff. It’s another dimension that allows people to play.”

Alison Donham and her son Arthur walked in to play hei favorite game, Raw Data. Touted as the ‘ultimate VR experience,’ Donham says playing the game with her son helps her access her other self. “I become a sword-wielding, Ninja robot-warrior woman,” she said. Arthur’s favorite is Beat Saber. “I almost got the highest score,” he said.

Highest scores from popular games are posted on the wall inside the lounge. There’s something for virtually every interest. Click on book time in VR or contact Worthington at 360-466-8736 or email him at consolekillertech@gmail.com