Lighten up and chase the blues away in Langley 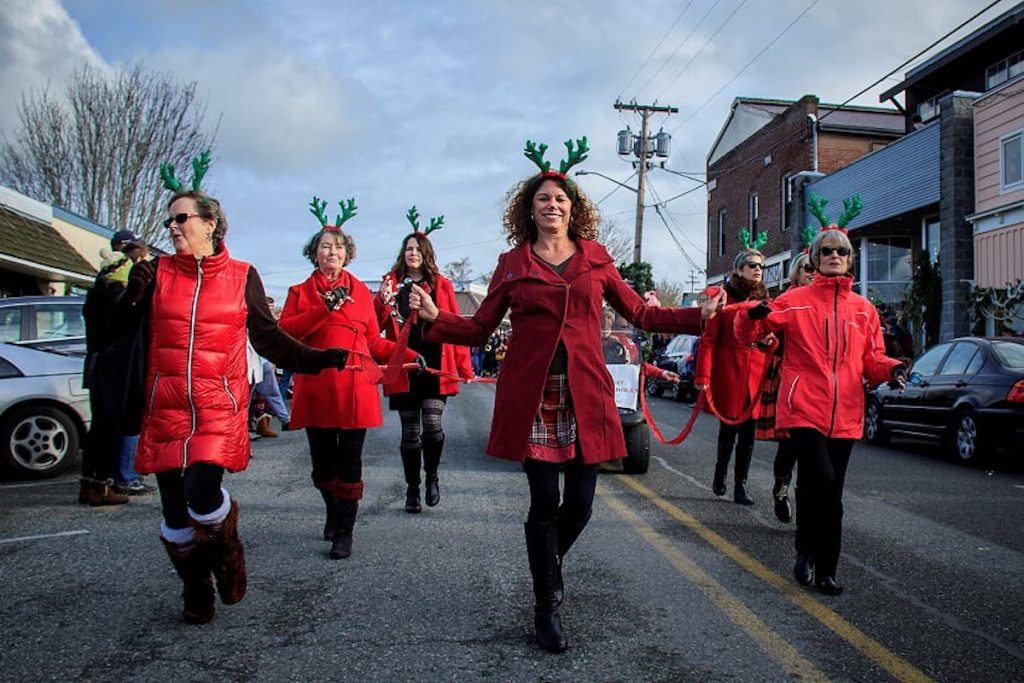 Ladies of Langley walk in the annual Holly Jolly Parade.

Langley, our village by the sea, has its colorful personalities, backdrop of snowy Cascade Mountains, picturesque storefronts and cozy lodging. During the darkest days these qualities are enhanced to chase the blues away and bring cheer to locals and visitors.

Events such as the Holly Jolly Parade and Deck the Doors celebrate the season and attract visitors to the fairy tale-esque scene during the darkest days when business usually slows down.

Musicians, floats, dancers, pirates, pets and other colorful characters, such as Gretchen Lawlor in one of her paper mache masks, take part in the Holly Jolly Parade, which winds through First and Second streets.  This year the parade took place on a blustery cold Dec. 1. Observing the parade from the front lawn of South Whidbey Commons,  I was moved to tears by the talent of the South Whidbey jazz band and Seattle-based Washington Scottish Pipe Band.

Langley Main Street Association, whose motto is “Keeping Langley Remarkable,” is a 6-year-old nonprofit, aimed at creating a sense of place for the village. Similar Main Street associations nationwide breathe life into towns and cities, spurring  a $49 billion reinvestment in traditional commercial areas and a renewed interest in creating community.  Langley’s Main Street Association promotes economic vitality and historic preservation through its membership, events, garden beautifications, and events such as Deck the Doors during the city’s slower months of tourism.

“The idea is to have an outdoor gallery, because it gets dark so early,” said Inge Morascini, executive director of the Chamber, who dovetails with Langley Mainstreet. “It’s good to have the stores lit up while people are shopping.”

While visiting the village, one may notice the South Whidbey Garden Club’s themed Christmas tree outside the Langley Library, the Grinch, a velour green-headed face topping a ballet-themed tree at the corner of Anthes and First Street. Merchants compete for prizes.

This year’s $1,000 grand prize was awarded to Fair Trade Outfitters on Anthes Street. The popular gift and clothing store’s cheery red facade is fronted by a year-round creative garden. This year the winter garden features lit burlap-clad ‘ladies’ whose undercarriages are supported by tomato cages sharing space with a giant sprinkling can with sparkling lights.

“I wanted an homage to my mother-in law, Victoria Fairbanks, who does our gardens out of love,” said Lilly Van Gerbig, who owns the store with her husband Barry of the same last name. “Her (Victoria’s) garden at home is a passion and it is reflected here. I can’t repay her. She loves her work. I’ve told her she’s a rock star while we get the accolades for her work. If you look under the water can, you’ll see a sign that reads ‘Victoria’s Garden.’ I’ll give the prize to her, knowing that it will go toward more plants.”

Take note of the Christmas trees, lit with white fairy lights on the roof above and in front of Chocolate Flower Farm. The trees’ frames are created by Cheri Bricker, who makes the Victorian-inspired wire garden ornaments. “I was inspired to make these by my mentor and best friend Carl Ulmschneider.” said Bricker. On a recent visit to the chocolate-scented store, owner Marie Lincoln hugged Bricker. “She’s the mastermind,” Lincoln said. On learning that they were a winner, Lincoln, Langley mayor Tim Callison and other Langley friends danced outside the store. Here’s a link shared by Michaleen McGarry, Langley Main Street Association’s executive director: Langley Main Street holiday dance.

Even though the power was out, this weekend, enjoy the village scene of Langley with an appreciation for its celebration of the holidays in its own style.