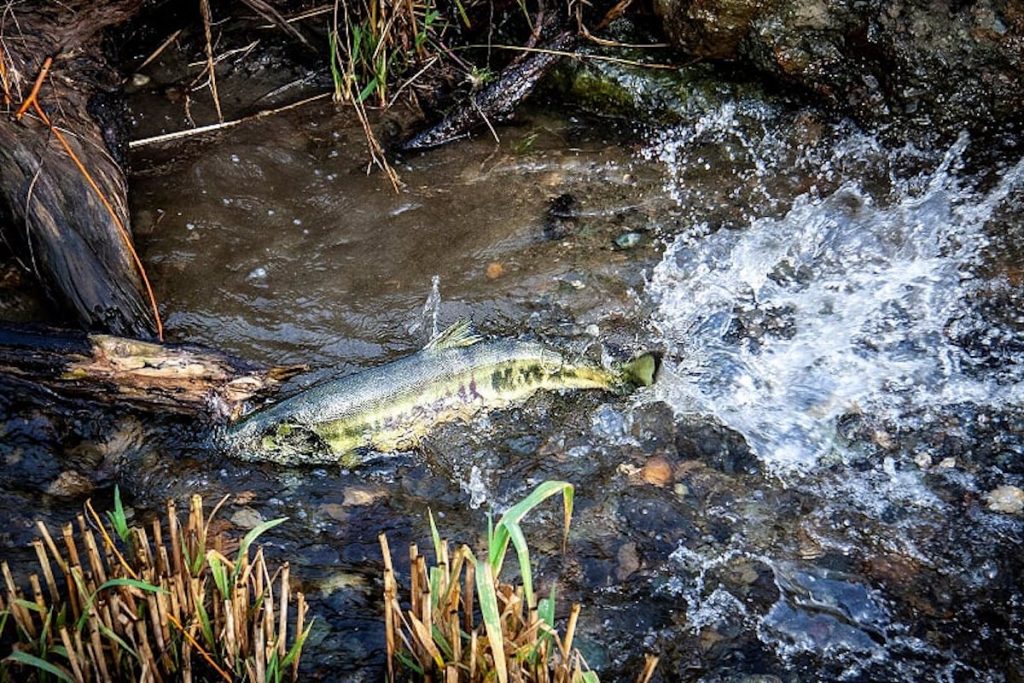 On a cold and blustery December First morning, folks left their warm homes in hopes of spotting salmon swimming up Glendale Creek from Possession Sound. But the fish didn’t show. Nevertheless the gathered crowd was interested in what a young man who says he is smitten by salmon had to say. 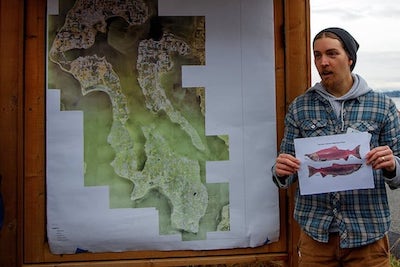 “Try as I might to summon the salmon, they obviously weren’t in Glendale Creek,” said Kyle Ostermick-Durkee, Stewardship Specialist for the Whidbey Camano Land Trust. Kyle organized the event dubbed Salmon Chat to raise awareness about Glendale Creek as one of four salmon spawning habitats in Island County and to get some help with planting at Glendale Beach, WCLT’s six-acre beach access that includes the creek. Mainly the talk was about salmon spawning creeks and the need to preserve their habitats with gravel, shade, cool temperatures, and vegetated creeksides. Island County’s other spawning creeks are Maxwelton Creek, Crescent Creek in North Whidbey and Kristopherson Creek on Camano Island.

Chum salmon are usually seen this time of year as they make their last journey home to the freshwater creek of their birth. They look haggard; using the last of their strength to swim upstream to spawn before dying.

Kyle explained that salmon are anadromous, meaning they are born in fresh water, spend most of their life at sea and return to the river or stream of their birth. The chum are also semelparous, meaning all their offspring are produced at one time, with the parent dying afterward.

“Here they spawn 2,000 to 4,000 eggs each,” Kyle explained. “Ten percent of the eggs hatch. Then there’s competition for those that survive for the first three to six months in fresh water. Chum usually spend two to four years in the ocean. When they return to their natal stream they usually stop eating when they hit fresh water. Their immune system shuts down.”

In order to address the dwindling numbers of native salmon populations, Washington State passed The Salmon Recovery Act in 1998. Island County passed its own Island County Salmon Recovery Plan in 2005 to protect and enhance salmon habitat on the island. The Whidbey Watershed Stewards maintain and protect the habitats. Nowadays with news reports about resident orcas not having enough salmon to eat, creating and protecting our salmon has taken on a greater importance.

Kyle reminded the group about the simple mnemonic device to recall the five species of Alaskan salmon that swim in our Puget Sound waters:

Using your hand as a reference: thumb is Chum; index finger is sockeye (for poke in the eye); middle finger is King or Chinook; ring finger is the Coho or Silver; pinky is Pink or humpy.

But it was the chum that folks had hoped to see.

Later in the week, Kyle sent an email saying, “If you feel utterly disappointed at this and want to see salmon elsewhere, I’ve included a link to the Wild Fish Conservancy Northwest’s list of salmon and steelhead viewing areas around Puget Sound. There is still time to see runs of fall and winter chum! A good ulterior motive for getting out on a fall hike: Wild Fish Conservancy.[simple-author-box]