Find a little bit of heaven at Raven Rocks Gallery 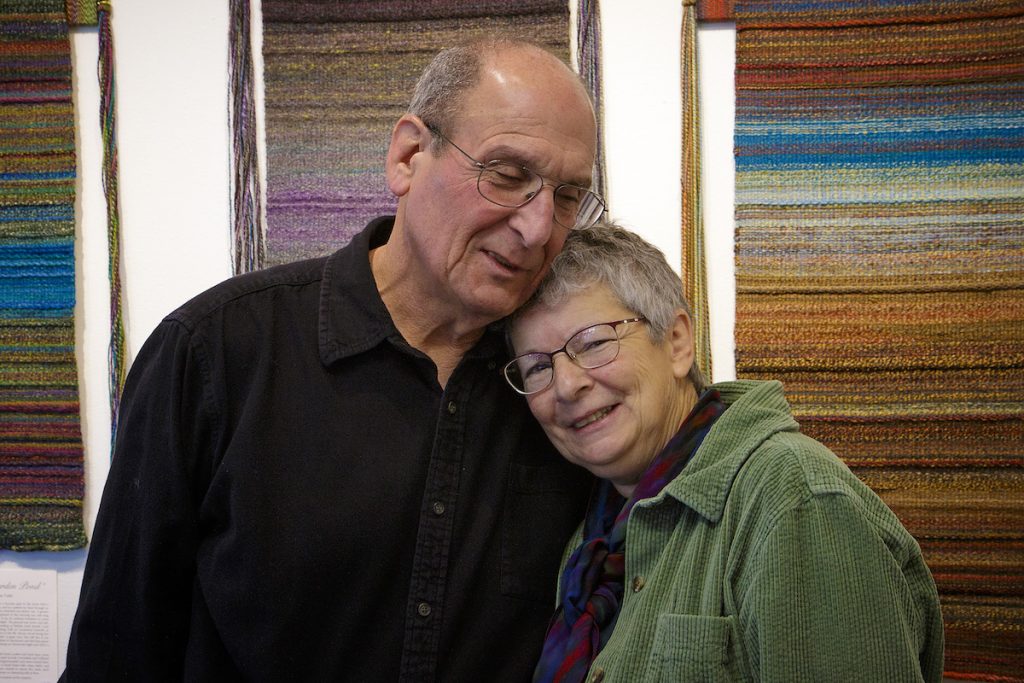 My spirits lift each time I walk into Raven Rocks Gallery at Greenbank Farm. It’s a portal for leaving one’s ego and woes at the door and an entry into a welcoming hearth of art.

This month celebrates the tenth birthday of the gallery; an ode to the simple gifts of gracious space and the tangible connection one feels to art made from the heart.

Artists Mary Jo Oxrieder and D.M. Windwalker Taibi, a married couple who took a leap of faith when our economy was crashing in 2008, opened an art space that has since thrived over the past decade.

As artists who once worked day jobs before they met, the couple test drove running a tiny closet of a gallery on Langley’s First Street before settling in at the Greenbank Farm.

A Spokane social worker in her earlier life, she then moved to Seattle in 1996, setting up a life coaching business and working for the Giraffe Heroes Project in Langley. Before he met Mary Jo, Windwalker was living in Ohio, making art and working at a day job. He was an educator on the East Coast before that time. The two met through an online spiritually-oriented dating website in November 2002. It was kismet, they say. They moved to Whidbey Island in 2003.

Fast-forward to learning to run a gallery in 2007.

“We had a great time there,” said Windwalker. We made fairy houses and started with a blank canvas at the beginning of the month—every week we had our works in progress at the gallery for the people to see. We each did a separate painting.”

But the space had limitations, Mary Jo said. Logistics required visitors to leave one part of the gallery and walk into another and it was difficult to know where to place art to be best seen.

By 2008 the couple weren’t sure they wanted to continue with running a gallery. The economy was beginning to unravel and many Langley galleries suffered in the wake of uncertain times.

“We honestly felt frustration at barely making ends meet,” Windwalker recalled. “This (island) was home and would stay home for us. When we faced the issue of having to bang on doors to show our work or to go back to doing shows, the prospect, in the sense, making your stand, was exactly what appealed to us. We knew what we wanted to do (inspired by the model of the neighborhood galleries of Greenwich Village, NY, in the late 1960’s), and where we wanted to do it (on Whidbey). Having it offered at the Greenbank Farm was a bonus.”

Surprisingly the rent at the farm fit within the couple’s budget and they took that as a good sign to begin a new venture. They came in a month ahead of time and painted the walls the color they wanted. The lease started November 1 and the response was positive. The gallery opened the same weekend Whidbey Weavers Guild held their annual Uncommon Threads fair at the Greenbank Farm barn.

Making friends with the weavers, Windwalker, especially, was interested in new techniques for weaving wool tapestries. The couple found they enjoyed working with wool. Nowadays they acquire hand-dyed fleece from fiber artists and spin it into skeins of yarn sold at the gallery. Some of the wool is used for Windwalker’s tactile tapestries or Mary Jo’s hand knit hats.

Windwalker also makes jewelry and pens whimsical prints of bearded ravens with hearts. Mary Jo creates a Fantasy House series, sold as prints; along with batik fabric Lucky Fish, Soft Hearts and Scrumbles—little whimsical characters of fabric that remind one of the lighter side of life. She likes when items find her and speak to her imagination and creativity.

For the gallery’s tenth anniversary, Windwalker created a series of paintings based on winter, recalling his boyhood memories of stark trees, wind, birds and winter sky in the Ramapo Mountains bordering New Jersey and New York. A mix of watercolors and black ink, the prints evoke the winter winds in this collection of mixed media artwork.

Wonder why the gallery is called Raven Rocks?

“I can only recount my side of the memory of this, so here’s the rest of the story,” Windwalker explained. “… Well, it’s kind of an easy/complicated happening. Mary Jo and I were selling small creations at our first weekend sale at the Bayview Farmer’s Market, probably about 2004. We were toying with what to call our studio when I mentioned how much I loved the sight of ravens playing on the wind each night high above the extinct volcano behind my home in Prescott, AZ. Mary Jo immediately envisioned a raven “rocking out,” dancing to unheard music. She actually did a painting of it. So, “Raven Rocks” worked on both counts. Our current logo was designed for us by Mary Jo’s son, Jason Oxrieder, as a gift to us upon opening the gallery ten years ago.”

Over the years, the couple formed a close community at Greenbank Farm.

“What we love now and loved then is that here at Greenbank Farm we work together and meet once a month,” Mary Jo said. “We coordinate things. We advertised together as we built our business. We work together as a family. We talk things through. We brainstorm.”

As self-proclaimed introverts Mary Jo and Windwalker say they like the gallery’s intimate setting which cultivates talking with visitors one-on-one. Many of the visitors are locals who return again and again.

“If you don’t have the local traffic, at least from our point of view, it doesn’t work,” Mary Jo said. “We have people from all over the world visiting as well.”

The secret to their success is creating a welcoming space with art they love making and inviting a dozen other renowned and emerging artists whose art reflects a similar level of happiness in the making.

“My underlying thing is I want people to be touched, moved, inspired,” Mary Jo said. “Return customers bring their friends back over and over because they know that no matter what they’ll be welcomed and treated beautifully and loved up. That’s the undercurrent, the underpinnings. It’s a bigger mission. Of course we want to sell art for ourselves and our artists.”

And over the years the gallery has thrived.