Remembering our loved ones on the other side 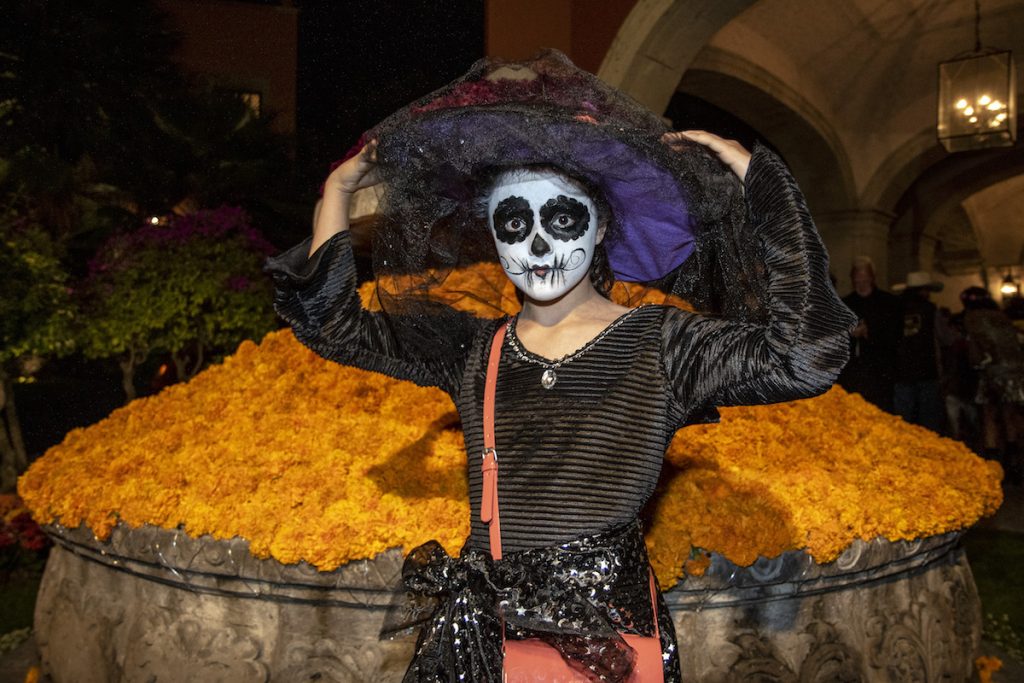 While America’s Halloween may be about candy, pumpkins, costumes and horror movies, the holiday also traditionally celebrates those who have passed on and the importance of honoring their memory. Catholics celebrate All Saints Day. Celtic traditions celebrate Samhain and people in Hispanic cultures celebrate Dia de Los Muertos or Day of the Dead.

‘This is Whidbey’s’ photographer David Welton traveled recently with his son to San Miguel de Allende, Mexico, for a photo workshop celebrating this important holiday. To get an idea of the experience, one may wish to watch the somewhat Disneyfied version of the practice in the popular film “Coco,” where the traditions depicted tell us our family and friends on the other side want us to remember them.

“Day of the Dead becomes a five-day event with quite a bit of time for decoration of homes and offices, crafts—the people make sugar skulls.” Welton said. “Almost everyone goes to the cemetery on November second. I bought two dozen marigolds outside the cemetery and walked around and went up to people and offered them a marigold. One guy at his sister’s grave looked up and smiled, then went back to grieving. There was a whole mix of emotions. This was not about dressing up like a scary freak. It was a celebratory time when the dead come back and communicate with their family. Very touching.”

Marigolds in Latin American culture are put out for spirits to find their family altars. In Dia de los Muertos celebrations, the Mexican marigold is the Targetes erecta, also known as the Aztec marigold, or cempasuchitl or flower of the dead.

“I saw a guy drinking a beer, sitting in the recessed grave, visiting his father,” Welton added. “We saw gravediggers, happy. I took a photo with a man with pierced ears holding his daughter. To me, that photograph speaks to the progression of life.

“All Saints Day (Nov. 1),  the night of the Catrina parade, was a good day for face-painting, masks and tequila shots. The next day, All Souls Day,  is a very sober , but generally happy day to re-connect with deceased relatives and ancestors at the cemetery.”

A Catrina parade celebrates La Calevara Catrina the ‘grand dame’ of death. She was originally created by political printmaker José Guadalupe Posada, whose zinc etchings of a skeleton dressed in fancy attire satirized Mexicans who emulated European aristocracy back in the early 1900s.

Welton says the trip opened his mind about our southern neighbor’s culture and people.“My attitude toward Mexico was totally changed,” he said. ” I am totally in love with Mexico now. The people look happy. This part of the country was really beautiful.”

Here on Whidbey Island celebrating our family and friends who have died is custom in some circles.

After the trick or treaters get their candy from Langley neighborhoods, there’s a more quiet celebration at the Langley Woodmen Cemetery on Nov. 1, All Soul’s Eve.

“All Soul’s Eve started in 1996 by the Friends of Langley Woodmen Cemetery, who have held it all these years,” said Cary Peterson, who helps host the event these days with many volunteers, including her mom Megan and friend Mully Mullally. “It  was a way to remember all those who have died, in a way that was simple, heartfelt, and accessible to everyone from all different walks of life and spiritual beliefs,” “It’s also beautiful and connected with place, and nature. Lucinda Herring (whose book, “Reimagining Death: Stories and Practical Wisdom for Home Funerals and Green Burials,” to be released in January 2019) was also involved in the early years. We made up the name. November 1, an easy date to remember, is All Saints Day, but it is the day before All Soul’s Day. So we called it All Soul’s Eve.

“I love luminaries and had been doing a Twelfth Night evening luminary event at Chinook (now the Whidbey Institute) since 1989. So when I left Chinook and moved to Langley in 1995, and we were brainstorming an event around this time of year, it seemed perfect to light the cemetery with luminaries, and the warm glow of our love and memories.”

Also hosting a sacred gathering since 1996, the Whidbey Island Waldorf School in Clinton began its observance of Dia de Los Muertos, or, Day of the Dead. The ofrenda is open to the public every year on November 1st. Everyone is invited to come and bring their photos, or bring their stories, or their silence. Ideally folks will go to the cemetery first for All Soul’s Night, then come to the school. Students make paper marigolds, sugar skulls, Catrinas, soul cakes and colorful papel picados or ‘pecked paper’ decorations for the lobby. Photos of family, friends and pets are posted on an altar or ofrende, along with votive candles. Students are invited to to tell the story about their loved one who has died. These days the school’s music teacher Frances Kenney holds the holiday tradition, along with the school’s Spanish teacher, Senora Susanne Schnippering, who was born in Columbia.

“The primary gift of this festival is that every year, our connections and memories of the dead grow rather than diminish,” Kenney wrote in the school’s weekly newsletter, her excerpt copied here with the school’s permission. “Our connections to one another also grow, as we come to know more about the people we each have loved and lost. I am always moved to witness these recollections of others: the love is palpable, and I leave feeling as though I have been blessed in some way by these beautiful souls who have departed, and I revel in the mystery of relationships, and how we are touched by others.”

Artist and popular astrologer Gretchen Lawlor recently lived in central Mexico for four years before returning to Whidbey Island to care for her dad, Peter. Like Welton, she was taken in by the people and their festive holiday for the dead. She hosted a workshop in October and invited locals to make sugar skulls and Catrinas that were on display at the upstairs front room at Bayview Corner. She said it was well-attended by a hundred or so and much-appreciated. Many left photos or papers on the altar with a loved one’s name.

“With Mexican people not being well-received here, it’s important we honor the wisdom they have to offer us,” Lawlor said. “They are so much healthier about death than we are. It’s that sense of continuity; the making fun of and playing with the idea of death, instead of the ghoulish ax murderer component that we have here.”

While living in Mexico Lawlor learned from her neighbors a  cryptic phrase that helped her understand the heart and soul of Dia de Los Muertos.

The holiday is celebrated from October through the eighth of November, Lawlor explained, with the most important days being Oct. 31, Nov. 1 and Nov. 2.

“November second is the last day for the dead who need the strength to return on their journey,” Lawlor said. “You offer water, favorite foods, a towel and soap to wash their hands. They use the marigolds, the scent, the cempasuchitl to tell the spirits there’s an ofrenda in the house. They sprinkle marigolds all the way from the street to their home.”

Lawlor said her workshop was a gift of service. Artists and visitors asked her to do this again next year.

“I did this workshop as a giveback to the community,” she added. “We are from the bones and we return to the bones.”