Healing Our Salish Sea So That Orcas Can Return to Health 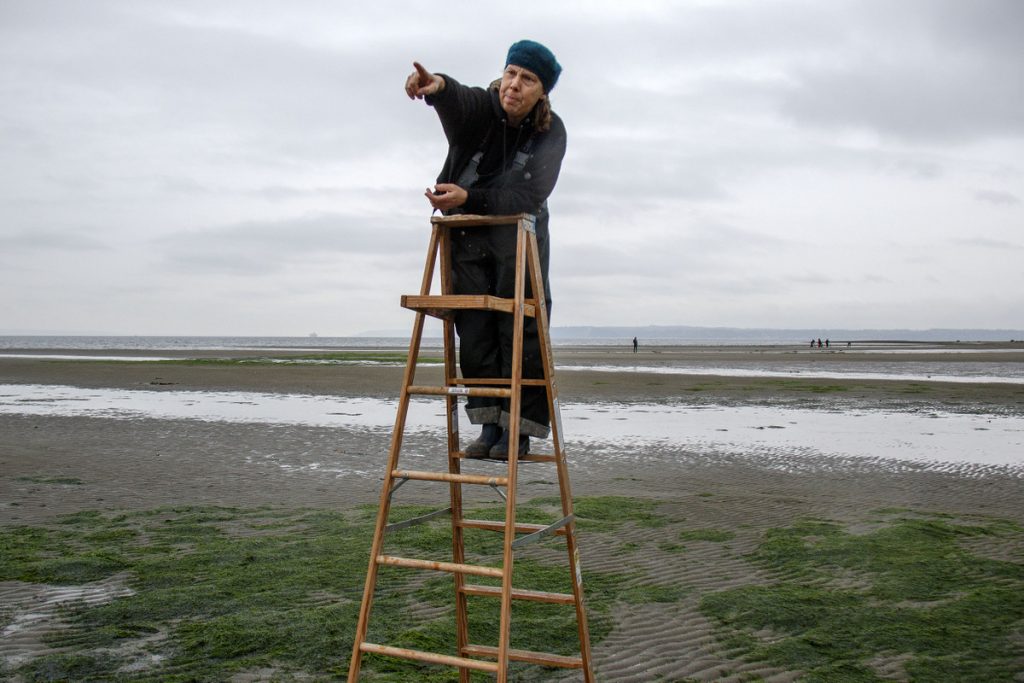 On a blustery October Sunday morning folks gathered to honor our resident orcas, mourn the giant dolphins’ recent losses and ask our state representatives to let the dams down so the salmon can return.

“We surely need all the pot stirring we can muster around the destruction of Mother Earth, taking care of the environment, and taking steps as a community to make changes that are well overdue,” said Melissa Koch, a Clinton artist committed to raising awareness for our land and sea.

“Jamen and I have been living on the beach for the past 10 months and heavily focused on the creatures that inhabit the Salish Sea,” Koch wrote in an email. “We have been watching the orca pods swim past during the summer months. With the news of the death of the baby orca and the health failings of others and lack of new births this year I began to look for ways to involve myself and invite the public to participate in projects that would bring more attention to their plight and call for the removal of the four lower dams on the Snake River.

“I called my friend Lauren to discuss the possibility of creating an installation/ceremony around this. Simultaneously she was contacted by The Backbone Campaign asking if she would like to create an orca human mural, which was perfect timing. We decided to jump on it.!!!

“Jamen, Lauren and I went to Vashon for the day to join a Backbone retreat. With about 8 – 10 people over the period of about 3 – 4 hours we laid out the colored string and formed the orca (over an existing string model) on the ground of a parking lot. It was quite complicated!!

Each intersection was zip-tied to a crossing string and every end piece was labeled top or bottom. The entire string configuration was then wrapped around a card table to prevent tangling as much as possible.

“The day of our event (Oct. 7) Lauren, Jamen, and I unwound the strings on the table and began the tedious job of stretching the whole thing out onto the beach. Lauren and I had to wing it a bit and reshape and configure the orca shape as things had slipped around quite a bit. I then laid out the black and white tablecloths to fill in fins, the tail and larger areas as we were only 40 in number. Normally it takes about 150 – 200 people to make the orca as it is 100 feet long x 20 feet wide. Next time I think we will just sketch it out in the sand.”

As artist activists filed in for the event held at Double Bluff’s low tide, Shively handed out letters that can be sent to Governor Inslee. Its message states how upgrading the dams will cost more than removing them and that more than 70,000 signed a petition sent to President Obama urging the dam’s removal and restoration of chinook salmon, the orca’s primary food.

The letter refers to four dams on the lower Snake River southeast of Yakima that are recommended for removal so that salmon can return. For more information visit: Snake River dam removal.

Recent headlines told of mother orca Tahlequah with her dead calf and her show of grief for nearly 20 days, as she pushed her baby through the water. Then young Scarlet died September 13 from starvation. She was only four and a member of the same resident J pod as Tahlequah.

In a show of communion with the black and white orcas, musician and world traveler Bob Effertz brought his English-made didgeridoo, in which he blew whale sounds while standing at the whale’s tale. Kate Marks joined him with a drum to create musical energy.

Speaking of energy, Jim Scullin, well-known as an actor, an enthusiastic activist, and also a long-time volunteer with Hearts and Hammers said, “I’m here to support this art. I’m pleased to be a part of it.”

Koch and her team placed round tablecloths, some black, some white, and weighed them down with stones in the orca-shaped grid. Folks gathered under their umbrellas. The cold wind and drizzle caused folks to cuddle close.

Bekah Zachritz, with her baby daughter Rhea snuggled close to her chest, braved the wind and drizzle so that her son Cooper could help with set up and take down of the whale mural grid. Cooper’s mentor Lauren Atkinson stood on a ladder choreographing the black-clad crowd on where to stand. Cooper attends the Calyx School at South Whidbey State Park, where Atkinson mentors student art programs.

“What an experience!” Zachritz wrote in an email. “I gave up doing something I love (community dance at Bayview Hall) Sunday morning because of how much my son, Cooper, wanted to participate with his school mentor, Lauren. It was really important to him and that made it important for me too. As soon as he arrived, he was eager to help with set up. His only complaint was that we didn’t stay longer to help clean up. Despite the rain and cold, it was a joyful experience for my family and friends who had also gathered with young children. I do hope there will be a bigger turn out for future Artistic Activism gatherings.”

While people and their umbrellas sparsely filled the whale design that could hold up to 200, Tessa Huey, co-owner of the Quintessa vacation rental estate in Clinton, saw the turnout as a metaphor for the orcas dwindling numbers, “It’s like the incomplete orca pod. It’s poignant.”

As the crowd looked up, Fred Lundahl flew overhead in his red vintage plane Scarlett while his buddy Dick Snowberger snapped images seen from the sky. Afterward, kids ran around and chased each other or tried to right their inside-out umbrellas. An orange drone operated by Clark Sarbaugh recorded aerial shots as well. From a birds-eye view the shape of an orca with the words “Restore the Salmon” printed along its belly in bold orangey-red letters appears along the beach.