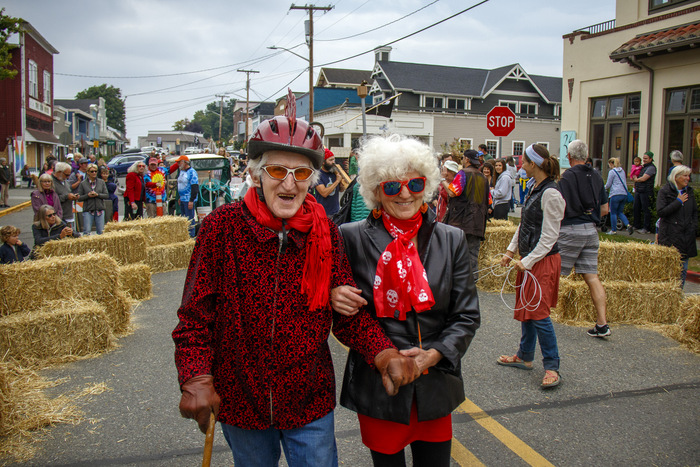 Imagine a Langley realtor on a golden toilet seat in a rolling outhouse racing a nearly 97-years-young poet in a red-hot chili pepper on wheels. Realtor Gary Piper and poet Peter Lawlor hold a grudge match each year in Langley’s Soup Box Derby that finds the two friends rolling neck and neck to the finish line. 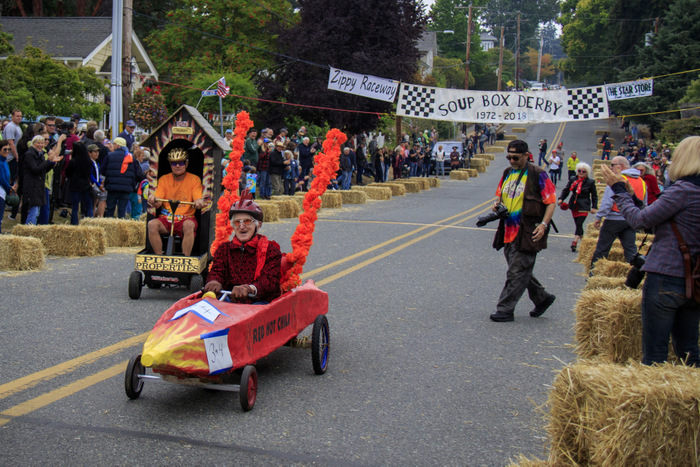 This year Lawlor won by a nose, but suspects Piper let him win on purpose. Age before beauty? As Whidbey’s poet laureate who has published six books, including “Footprints” this year, Lawlor believes that writing a poem each day is the recipe for longevity in mind and body. In that vein Lawlor wrote a poem about this possibly being his last race. Piper says the poem gave him a tear in the eye as he read:

Piper is no piker
Though I beat him fair and square
Perhaps he put his brakes on
Let me win in my hot chili chair.
He might have made the gesture
In respect for my last race—
A bit risky at ninety-seven,
But I’ll race it up in heaven.
I’m handing things over to my daughter
It’s up to her to pick up the torch
To beat Piper she oughter
Without feeling any remorse.
He gave us a thumbs up sign,
As he sat by his outhouse door,
The consummate Soup Box racer.
A pooper dooper evermore. 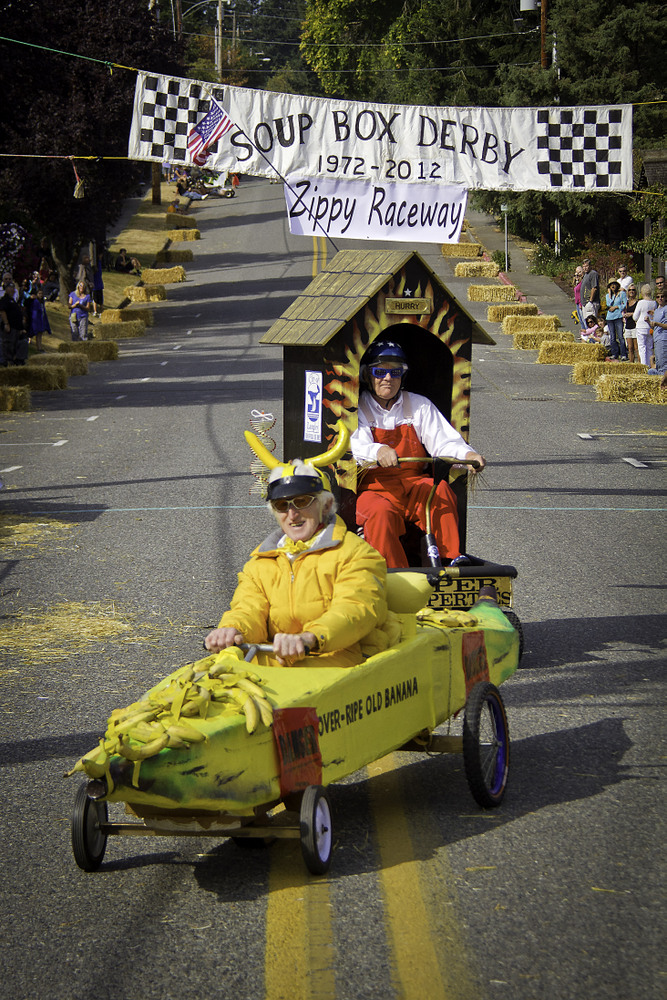 The idea of the Soap Box Derby began as a photoshoot by newsman Myron Scott in Ohio who was assigned tp cover a group of boys racing their homemade cars in the summer of 1933. Scott was so impressed with the event that he acquired a copyright to Soap Box Derby and went in search of a corporate sponsor to establish a national program. Once sponsored by Chevrolet and now by the Akron Jaycees, the events for kids take place internationally.

Since the 1970s Langley celebrates the end of summer, renaming the sport as Soup Box Derby, a race for all ages with no end to one’s imagination, judging by the quirky vehicles and costumes where everyone wins a trophy. The vehicles have steering and brakes, but run solely on gravity down Langley’s First Street.

Lawlor’s daughter Gretchen is a popular South Island astrologer and artist who helps her dad create his paper mache vehicles.

“I’ve done more than a dozen years with my dad,” says Gretchen Lawlor, who serves with other friends and family as pit crew members. “First he went down in a coffin he built. He’s had several versions of the ripe old banana; there’s the great white shark. Then there was the whole enchilada, which evolved into the red hot chili pepper. We construct them in the garage. I use my paper mache skills to develop the models. We try to have a pit crew in full costume each year. Once we were dressed as bumblebees. We’ve had versions on chiles. This year we were dressed with red sunglasses and bowties, which included his two granddaughters.” 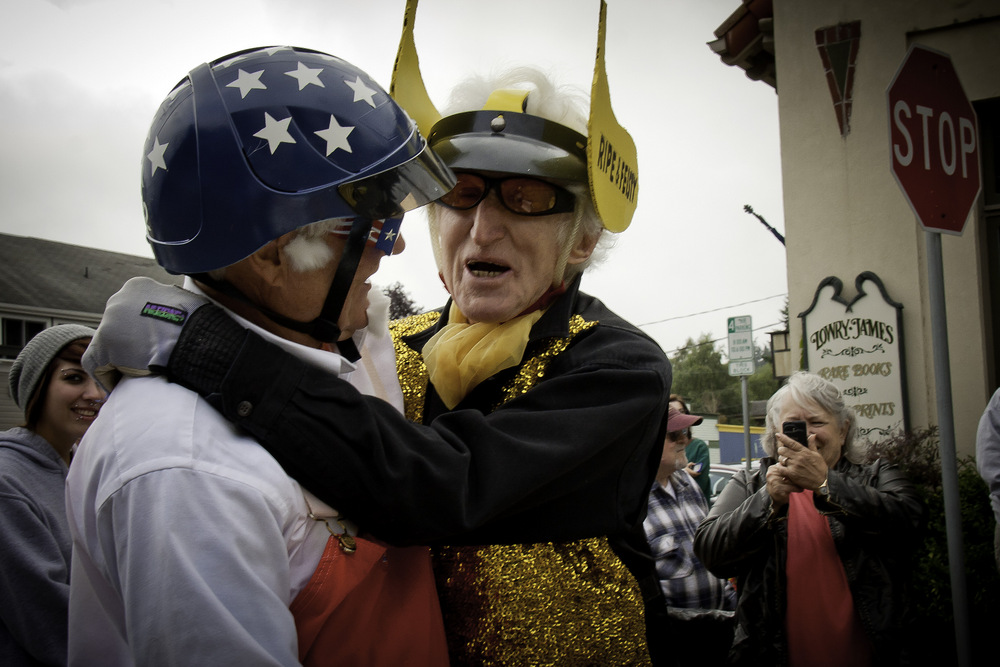 Lawlor is a merchant mariner from New Zealand who worked as a ski instructor and newspaper columnist in the U.S.

“We grew up following the snow and following this crazy father of mine,” Gretchen Lawlor says. My parents were fairly nomadic. They lived in England, Crete, and in Santa Fe for 24 years.  When my mother died, my father was desperately lonely for the sea.”

Peter moved to Langley by the Sea in 2000 to join his daughter and soon became known as Whidbey Island’s poet laureate. Father and daughter each have a halo of thick white hair which distinguishes them wherever they go. Locals may well remember Peter for his poetry and harmonica/accordion gigs at Whidbey Commons and Mukilteo Coffee. Peter will visit his girlfriend Roberta in Honolulu this month before celebrating his 97th birthday Nov. 26.

As for Peter’s first soup box, the coffin? Gretchen says it is in the laundry room awaiting the last trip.

“He created it. I lined it,” she says. “It fits his proportions. When he does go we’ll have a community event which will entail a last ride downhill.”